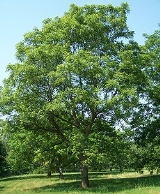 Overview
Juglans is a plant genus of the family Juglandaceae
Juglandaceae
The Juglandaceae, also known as the Walnut Family, is a family of trees, or sometimes shrubs, in the order Fagales. Various members of this family are native to the Americas, Eurasia, and Southeast Asia....
, the seeds of which are known as walnut
Walnut
Juglans is a plant genus of the family Juglandaceae, the seeds of which are known as walnuts. They are deciduous trees, 10–40 meters tall , with pinnate leaves 200–900 millimetres long , with 5–25 leaflets; the shoots have chambered pith, a character shared with the wingnuts , but not the hickories...
s. They are deciduous
Deciduous
Deciduous means "falling off at maturity" or "tending to fall off", and is typically used in reference to trees or shrubs that lose their leaves seasonally, and to the shedding of other plant structures such as petals after flowering or fruit when ripe...
tree
Tree
A tree is a perennial woody plant. It is most often defined as a woody plant that has many secondary branches supported clear of the ground on a single main stem or trunk with clear apical dominance. A minimum height specification at maturity is cited by some authors, varying from 3 m to...
s, 10–40 meters tall (about 30–130 ft), with pinnate
Pinnate
Pinnate is a term used to describe feather-like or multi-divided features arising from both sides of a common axis in plant or animal structures, and comes from the Latin word pinna meaning "feather", "wing", or "fin". A similar term is pectinate, which refers to a comb-like arrangement of parts...
leaves 200–900 millimetres long (7–35 in), with 5–25 leaflets; the shoots have chambered pith
Pith
Pith, or medulla, is a tissue in the stems of vascular plants. Pith is composed of soft, spongy parenchyma cells, which store and transport nutrients throughout the plant. In eudicots, pith is located in the center of the stem. In monocots, it extends also into flowering stems and roots...
, a character shared with the wingnuts (Pterocarya), but not the hickories
Hickory
Trees in the genus Carya are commonly known as hickory, derived from the Powhatan language of Virginia. The genus includes 17–19 species of deciduous trees with pinnately compound leaves and big nuts...
(Carya) in the same family.

The 21 species in the genus range across the north temperate Old World
Old World
The Old World consists of those parts of the world known to classical antiquity and the European Middle Ages. It is used in the context of, and contrast with, the "New World" ....
from southeast Europe
Europe
Europe is, by convention, one of the world's seven continents. Comprising the westernmost peninsula of Eurasia, Europe is generally 'divided' from Asia to its east by the watershed divides of the Ural and Caucasus Mountains, the Ural River, the Caspian and Black Seas, and the waterways connecting...
east to Japan
Japan
Japan is an island nation in East Asia. Located in the Pacific Ocean, it lies to the east of the Sea of Japan, China, North Korea, South Korea and Russia, stretching from the Sea of Okhotsk in the north to the East China Sea and Taiwan in the south...
, and more widely in the New World
New World
The New World is one of the names used for the Western Hemisphere, specifically America and sometimes Oceania . The term originated in the late 15th century, when America had been recently discovered by European explorers, expanding the geographical horizon of the people of the European middle...
from southeast Canada
Canada
Canada is a North American country consisting of ten provinces and three territories. Located in the northern part of the continent, it extends from the Atlantic Ocean in the east to the Pacific Ocean in the west, and northward into the Arctic Ocean...
west to California
California
California is a state located on the West Coast of the United States. It is by far the most populous U.S. state, and the third-largest by land area...
and south to Argentina
Argentina
Argentina , officially the Argentine Republic , is the second largest country in South America by land area, after Brazil. It is constituted as a federation of 23 provinces and an autonomous city, Buenos Aires...
.
The trivial name
Trivial name
In chemistry, a trivial name is a common name or vernacular name; it is a non-systematic name or non-scientific name. That is, the name is not recognised according to the rules of any formal system of nomenclature...
walnut
Walnut
Juglans is a plant genus of the family Juglandaceae, the seeds of which are known as walnuts. They are deciduous trees, 10–40 meters tall , with pinnate leaves 200–900 millimetres long , with 5–25 leaflets; the shoots have chambered pith, a character shared with the wingnuts , but not the hickories...
derives from Old English
Old English language
Old English or Anglo-Saxon is an early form of the English language that was spoken and written by the Anglo-Saxons and their descendants in parts of what are now England and southeastern Scotland between at least the mid-5th century and the mid-12th century...
wealhhnutu, literally "foreign nut", wealh meaning "foreign" (wealh is akin to the terms Welsh and Vlach; see Walha
Walha
Walhaz is a reconstructed Proto-Germanic word, meaning "foreigner", "stranger", "Roman", "Romance-speaker", or "Celtic-speaker". The adjective derived from this word can be found in , Old High German walhisk, meaning "Romance", in Old English welisċ, wælisċ, wilisċ, meaning "Romano-British" and in...
and History of the term Vlach
History of the term Vlach
Vlach is a Slavic-derived term , which is used to designate the Romance speaking peoples of South-Eastern Europe: Romanians, Aromanians, Megleno-Romanians and Istro-Romanians....
).

What should I do to prevent unripe walnuts from falling on their own?
More
x