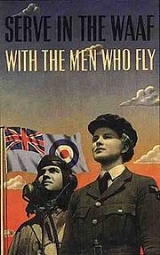 Encyclopedia
The Women's Auxiliary Air Force (WAAF), whose members were invariably referred to as Waafs (icon), was the female auxiliary of the Royal Air Force
Royal Air Force
The Royal Air Force is the aerial warfare service branch of the British Armed Forces. Formed on 1 April 1918, it is the oldest independent air force in the world...
during World War II
World War II
World War II, or the Second World War , was a global conflict lasting from 1939 to 1945, involving most of the world's nations—including all of the great powers—eventually forming two opposing military alliances: the Allies and the Axis...
, established in 1939. At its peak strength, in 1943, WAAF numbers exceeded 180,000, with over 2,000 women enlisting per week.

WAAFs did not serve as aircrew
Aircrew
Aircrew are the personnel who operate an aircraft while in flight. The composition of the crew depends on the type of aircraft as well as the purpose of the flight.-Civilian:*Aviator** Pilot-in-command** First officer** Second officer** Third officer...
. The use of women pilots was limited to the Air Transport Auxiliary
Air Transport Auxiliary
The Air Transport Auxiliary was a British World War II civilian organisation that ferried new, repaired and damaged military aircraft between UK factories, assembly plants, transatlantic delivery points, Maintenance Units , scrap yards, and active service squadrons and airfields—but not to...
(ATA), which was civilian. Neither did they participate in active combat, though they were exposed to the same dangers as any on the "home front" working at military installations. They were active in parachute
Parachute
A parachute is a device used to slow the motion of an object through an atmosphere by creating drag, or in the case of ram-air parachutes, aerodynamic lift. Parachutes are usually made out of light, strong cloth, originally silk, now most commonly nylon...
packing and the manning of barrage balloon
Barrage balloon
A barrage balloon is a large balloon tethered with metal cables, used to defend against low-level aircraft attack by damaging the aircraft on collision with the cables, or at least making the attacker's approach more difficult. Some versions carried small explosive charges that would be pulled up...
s in addition to performing catering
Catering
Catering is the business of providing foodservice at a remote site or a site such as a hotel, public house , or other location.-Mobile catering:A mobile caterer serves food directly from a vehicle or cart that is designed for the purpose...
, meteorology
Meteorology
Meteorology is the interdisciplinary scientific study of the atmosphere. Studies in the field stretch back millennia, though significant progress in meteorology did not occur until the 18th century. The 19th century saw breakthroughs occur after observing networks developed across several countries...
, radar
Radar
Radar is an object-detection system which uses radio waves to determine the range, altitude, direction, or speed of objects. It can be used to detect aircraft, ships, spacecraft, guided missiles, motor vehicles, weather formations, and terrain. The radar dish or antenna transmits pulses of radio...
, transport, communications duties including wireless telephonic
Telephony
In telecommunications, telephony encompasses the general use of equipment to provide communication over distances, specifically by connecting telephones to each other....
and telegraphic operation. They worked with codes and ciphers, analysed reconnaissance photographs, and performed intelligence
Intelligence (information gathering)
Intelligence assessment is the development of forecasts of behaviour or recommended courses of action to the leadership of an organization, based on a wide range of available information sources both overt and covert. Assessments are developed in response to requirements declared by the leadership...
operations. WAAFs were a vital presence in the control of aircraft, both the radar stations and iconically as plotters in the operation rooms, most notably during the Battle of Britain
Battle of Britain
The Battle of Britain is the name given to the World War II air campaign waged by the German Air Force against the United Kingdom during the summer and autumn of 1940...
. These operation rooms directed fighter aircraft against the Luftwaffe
Luftwaffe
Luftwaffe is a generic German term for an air force. It is also the official name for two of the four historic German air forces, the Wehrmacht air arm founded in 1935 and disbanded in 1946; and the current Bundeswehr air arm founded in 1956....
, mapping both home and enemy positions.

WAAFs were paid two-thirds of the pay of male counterparts in RAF ranks.

Initially, the WAAF used the ATS ranking system, although the director held the rank of "Senior Controller" (equivalent to Brigadier in the BA, Air Commodore in the RAF) instead of "Chief Controller" (equivalent to Major-General, Air Vice-Marshal) as in the ATS. However, in December 1939 the name was changed to Air Commandant, when the ranks were renamed and reorganized, other ranks
Other Ranks
Other Ranks in the British Army, Royal Marines and Royal Air Force are those personnel who are not commissioned officers. In the Royal Navy, these personnel are called ratings...
now held identical ranks to male RAF personnel, but officers continued to have a separate rank system, although now different from that of the ATS. From February 1940 it was no longer possible to enter directly as an officer; from that time all officers were appointed from the other ranks. From July 1941 WAAF officers held full commissions. On January 1 1943, the rank of Air Chief Commandant (equivalent to Major-General, Air Vice-Marshal) was created with the director's appointment to that rank. 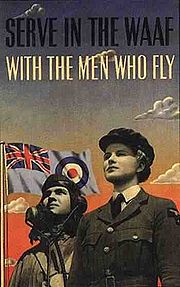 Nursing Orderlies of the WAAF flew on RAF transport planes to evacuate the wounded from the Normandy battlefields. They were dubbed Flying Nightingales by the press. The RAF Air Ambulance Unit flew under 46 Group Transport Command from RAF Down Ampney
RAF Down Ampney
RAF Down Ampney was a Royal Air Force station near Cricklade, Gloucestershire during World War II from February 1944 to February 1947.Down Ampney was part of a group of 3 airfields with RAF Broadwell and RAF Blakehill Farm dedicated to air transportation....
, RAF Broadwell
RAF Broadwell
RAF Broadwell was a Royal Air Force station located 2 miles north of Broadwell and 3 miles southeast of Burford, Oxfordshire, within 2 miles of RAF Brize Norton. It opened on 15 November 1943 and closed on 31 March 1947, operating under RAF Transport Command...
, and RAF Blakehill Farm
RAF Blakehill Farm
RAF Blakehill Farm was an RAF base situated in Wiltshire, England. The station was opened in 1944 as a base for transport aircraft of No. 46 Group Transport Command. In 1948 the airfield was a satellite of RAF South Cerney and used by training aircraft before the airfield closed in 1952 and was...
. RAF Dakota
Douglas DC-3
The Douglas DC-3 is an American fixed-wing propeller-driven aircraft whose speed and range revolutionized air transport in the 1930s and 1940s. Its lasting impact on the airline industry and World War II makes it one of the most significant transport aircraft ever made...
aircraft carried military supplies and ammunition so could not display the Red Cross.

Training for air ambulance nursing duties included instruction in the use of oxygen, injections, learning how to deal with certain types of injuries such as broken bones, missing limb cases, head injuries, burns and colostomies; and to learn the effects of air travel and altitude.