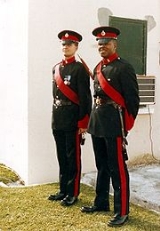 The rank was first used in the (then) English Royal Navy
Royal Navy
The Royal Navy is the naval warfare service branch of the British Armed Forces. Founded in the 16th century, it is the oldest service branch and is known as the Senior Service...
and is today used in many other countries, including the Commonwealth
Commonwealth of Nations
The Commonwealth of Nations, normally referred to as the Commonwealth and formerly known as the British Commonwealth, is an intergovernmental organisation of fifty-four independent member states...
nations, and the United States
United States
The United States of America is a federal constitutional republic comprising fifty states and a federal district...
. Outside the United States they are effectively senior non-commissioned officers with long military experience, although technically in a cadre of their own between NCOs and commissioned officers.

I am a mother and a grandmother who has seen my seven year old grand daughter for 3 years and four weeks. My grand daughter`s mother Danielle Odds has...
More
x