A barrage balloon is a large balloon
Moored balloon
A moored balloon is an inflated fabric structure, often shaped like an airship and usually filled with helium, that is restrained by a cable attached to the ground or a vehicle. Moored balloons differ from airships and free balloons in that it is not free-flying.Moored balloons are sometimes...
tethered with metal cables, used to defend against low-level aircraft attack by damaging the aircraft on collision with the cables, or at least making the attacker's approach more difficult. Some versions carried small explosive charges that would be pulled up against the aircraft to ensure its destruction. Barrage balloons were regularly employed only against low-flying aircraft, the weight of a longer cable making them impractical for higher altitudes. 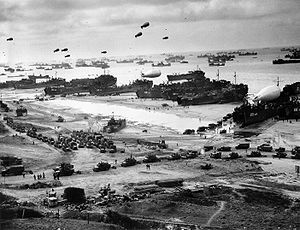 In 1938 the British Balloon Command
RAF Balloon Command
Balloon Command was the Royal Air Force command which was responsible for controlling all the United Kingdom-based barrage balloon units during World War II.- History :...
was established to protect cities and key targets such as industrial areas, ports and harbours. Balloons were intended to defend against dive bomber
Dive bomber
A dive bomber is a bomber aircraft that dives directly at its targets in order to provide greater accuracy for the bomb it drops. Diving towards the target reduces the distance the bomb has to fall, which is the primary factor in determining the accuracy of the drop...
s flying at heights up to 5,000 feet (1,500 m), forcing them to fly higher and into the range of concentrated anti-aircraft fire—anti-aircraft guns could not traverse fast enough to attack aircraft flying at low altitude and high speed. By the middle of 1940 there were 1,400 balloons, a third of them over the London area.

While dive-bombers were devastatingly effective against undefended targets, such as Guernica
Bombing of Guernica
The bombing of Guernica was an aerial attack on the Basque town of Guernica, Spain, causing widespread destruction and civilian deaths, during the Spanish Civil War...
and Rotterdam
Rotterdam Blitz
The Rotterdam Blitz refers to the aerial bombardment of Rotterdam by the German Air Force on 14 May 1940, during the German invasion of the Netherlands in World War II. The objective was to support the German troops fighting in the city, break Dutch resistance and force the Dutch to surrender...
, they were very vulnerable to attack by fighter aircraft, and their use by Germany against Britain with its effective Royal Air Force
Royal Air Force
The Royal Air Force is the aerial warfare service branch of the British Armed Forces. Formed on 1 April 1918, it is the oldest independent air force in the world...
was rapidly discontinued. Balloons proved to be of little use against the German high-level bombers with which the dive-bombers were replaced, but continued to be manufactured nonetheless, until there were almost 3,000 in 1944. They proved to be mildly effective against the V-1 flying bomb
V-1 flying bomb
The V-1 flying bomb, also known as the Buzz Bomb or Doodlebug, was an early pulse-jet-powered predecessor of the cruise missile....
, which usually flew at 2,000 feet (600 m) or lower but had wire-cutters on its wings to counter balloons. 231 V-1s are officially claimed to have been destroyed by balloons.

Many bombers were equipped with devices to cut barrage balloon cables. Britain used large numbers of balloons, so Germany developed the most capable cable-cutters. Their systems consisted of small C-shaped devices attached to the leading edge of the wing. When a cable entered the device after sliding down the wing, it triggered a small explosive charge that drove a blade through the cable. British bombers were also equipped with cable-cutters although the Germans used few barrage balloons.

The British added two refinements to their balloons, "Double Parachute Link" (DPL) and "Double Parachute/Ripping" (DP/R). The former was triggered by the shock of an enemy bomber snagging the cable, causing that section of cable to be explosively released complete with parachutes at either end; the combined weight and drag bringing down the aircraft. The latter was intended to render the balloon safe if it broke free accidentally. The heavy mooring cable would separate at the balloon and fall to the ground under a parachute; at the same time a panel would be ripped away from the balloon causing it to deflate and fall independently to the ground.

Balloons were sometimes more trouble than they were worth. In 1942 Canadian
Canada
Canada is a North American country consisting of ten provinces and three territories. Located in the northern part of the continent, it extends from the Atlantic Ocean in the east to the Pacific Ocean in the west, and northward into the Arctic Ocean...
and American
United States
The United States of America is a federal constitutional republic comprising fifty states and a federal district...
forces began joint operations to protect the sensitive locks and shipping channel at Sault Ste. Marie along their common border among the Great Lakes
Great Lakes
The Great Lakes are a collection of freshwater lakes located in northeastern North America, on the Canada – United States border. Consisting of Lakes Superior, Michigan, Huron, Erie, and Ontario, they form the largest group of freshwater lakes on Earth by total surface, coming in second by volume...
against possible air attack. During severe storms in August and October 1942 some barrage balloons broke loose, and the trailing cables short-circuited power lines
Electric power transmission
Electric-power transmission is the bulk transfer of electrical energy, from generating power plants to Electrical substations located near demand centers...
, causing serious disruption to mining
Mining
Mining is the extraction of valuable minerals or other geological materials from the earth, from an ore body, vein or seam. The term also includes the removal of soil. Materials recovered by mining include base metals, precious metals, iron, uranium, coal, diamonds, limestone, oil shale, rock...
and manufacturing
Manufacturing
Manufacturing is the use of machines, tools and labor to produce goods for use or sale. The term may refer to a range of human activity, from handicraft to high tech, but is most commonly applied to industrial production, in which raw materials are transformed into finished goods on a large scale...
. In particular, the metals production vital to the war effort was disrupted. Canadian military historical records indicate that "The October incident, the most serious, caused an estimated loss of 400 tons of steel and 10 tons of ferro-alloys."

An unforeseen use for surplus barrage balloons was as tethered shot balloons for nuclear weapon tests, throughout most of the period when nuclear weapons were tested in the atmosphere. The weapon or shot was carried aloft to the required altitude slung underneath the barrage balloon, allowing test shots at much higher altitudes than tower shots, in controlled conditions. Several of the shots in the Operation Plumbob series were carried out using barrage balloons to carry the devices.