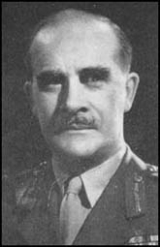 Overview
The Special Operations Executive (SOE) was a World War II
World War II
World War II, or the Second World War , was a global conflict lasting from 1939 to 1945, involving most of the world's nations—including all of the great powers—eventually forming two opposing military alliances: the Allies and the Axis...
organisation of the United Kingdom
United Kingdom
The United Kingdom of Great Britain and Northern IrelandIn the United Kingdom and Dependencies, other languages have been officially recognised as legitimate autochthonous languages under the European Charter for Regional or Minority Languages...
. It was officially formed by Prime Minister
Prime Minister of the United Kingdom
The Prime Minister of the United Kingdom of Great Britain and Northern Ireland is the Head of Her Majesty's Government in the United Kingdom. The Prime Minister and Cabinet are collectively accountable for their policies and actions to the Sovereign, to Parliament, to their political party and...
Winston Churchill
Winston Churchill
Sir Winston Leonard Spencer-Churchill, was a predominantly Conservative British politician and statesman known for his leadership of the United Kingdom during the Second World War. He is widely regarded as one of the greatest wartime leaders of the century and served as Prime Minister twice...
and Minister of Economic Warfare
Minister of Economic Warfare
The Minister of Economic Warfare was a British government position which existed during the Second World War. The minister was in charge of the Special Operations Executive.-Ministers of Economic Warfare 1939-1945:...
Hugh Dalton
Hugh Dalton
Edward Hugh John Neale Dalton, Baron Dalton PC was a British Labour Party politician who served as Chancellor of the Exchequer from 1945 to 1947, when he was implicated in a political scandal involving budget leaks....
on 22 July 1940, to conduct guerrilla warfare
Guerrilla warfare
Guerrilla warfare is a form of irregular warfare and refers to conflicts in which a small group of combatants including, but not limited to, armed civilians use military tactics, such as ambushes, sabotage, raids, the element of surprise, and extraordinary mobility to harass a larger and...
against the Axis powers
Axis Powers
The Axis powers , also known as the Axis alliance, Axis nations, Axis countries, or just the Axis, was an alignment of great powers during the mid-20th century that fought World War II against the Allies. It began in 1936 with treaties of friendship between Germany and Italy and between Germany and...
and to instruct and aid local resistance movement
Resistance during World War II
Resistance movements during World War II occurred in every occupied country by a variety of means, ranging from non-cooperation, disinformation and propaganda to hiding crashed pilots and even to outright warfare and the recapturing of towns...
s. On its formation, it was ordered by Churchill to "set Europe
Europe
Europe is, by convention, one of the world's seven continents. Comprising the westernmost peninsula of Eurasia, Europe is generally 'divided' from Asia to its east by the watershed divides of the Ural and Caucasus Mountains, the Ural River, the Caspian and Black Seas, and the waterways connecting...
ablaze". Its mission was to encourage and facilitate espionage
Espionage
Espionage or spying involves an individual obtaining information that is considered secret or confidential without the permission of the holder of the information. Espionage is inherently clandestine, lest the legitimate holder of the information change plans or take other countermeasures once it...
, sabotage
Sabotage
Sabotage is a deliberate action aimed at weakening another entity through subversion, obstruction, disruption, or destruction. In a workplace setting, sabotage is the conscious withdrawal of efficiency generally directed at causing some change in workplace conditions. One who engages in sabotage is...
and reconnaissance
Reconnaissance
Reconnaissance is the military term for exploring beyond the area occupied by friendly forces to gain information about enemy forces or features of the environment....
behind enemy lines. In its early days, it was also involved in the formation of the Auxiliary Units
Auxiliary Units
The Auxiliary Units or GHQ Auxiliary Units were specially trained, highly secret units created by the United Kingdom government during the Second World War, with the aim of resisting the expected occupation of the United Kingdom by Nazi Germany, after a planned invasion codenamed Operation Sea Lion...
, a British resistance movement which would act in case of a German invasion of Britain.

Being a clandestine organisation, few people were openly aware of its existence.