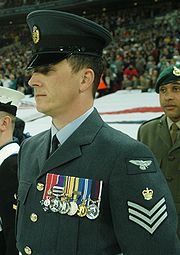 Flight sergeant is a senior non-commissioned
Non-commissioned officer
A non-commissioned officer , called a sub-officer in some countries, is a military officer who has not been given a commission...
rank in the British
United Kingdom
The United Kingdom of Great Britain and Northern IrelandIn the United Kingdom and Dependencies, other languages have been officially recognised as legitimate autochthonous languages under the European Charter for Regional or Minority Languages...
Royal Air Force
Royal Air Force
The Royal Air Force is the aerial warfare service branch of the British Armed Forces. Formed on 1 April 1918, it is the oldest independent air force in the world...
and several other air force
Air force
An air force, also known in some countries as an air army, is in the broadest sense, the national military organization that primarily conducts aerial warfare. More specifically, it is the branch of a nation's armed services that is responsible for aerial warfare as distinct from an army, navy or...
s which have adopted all or part of the RAF rank structure. It is equivalent to a staff sergeant
Staff Sergeant
Staff sergeant is a rank of non-commissioned officer used in several countries.The origin of the name is that they were part of the staff of a British army regiment and paid at that level rather than as a member of a battalion or company.-Australia:...
in the British Army and has a NATO rank code of OR-7.

On 1 July 1946, aircrew
Aircrew
Aircrew are the personnel who operate an aircraft while in flight. The composition of the crew depends on the type of aircraft as well as the purpose of the flight.-Civilian:*Aviator** Pilot-in-command** First officer** Second officer** Third officer...
flight sergeants were redesignated Aircrew I and replaced their chevrons with three six-pointed stars within a wreath and surmounted by an eagle and a crown. This proved unpopular however, and in 1950 they reverted to their old rank and badge, although Flight Sergeants Aircrew wear an eagle between chevrons and crown. Flight Sergeants in ground trades wear only a crown above the three chevrons.

Between 1950 and 1964, the rank of Chief Technician was equivalent to flight sergeant and was held instead of it by technicians, but now chief technician is a junior rank (still held only by technicians), although classified by NATO in the same grade.

In the RAF, the rank insignia is three downward pointing chevrons below a crown and flight sergeants are usually addressed as "Flight" and are never addressed by the junior rank of "Sergeant".

Flight Sergeant is also used in many cadet
Cadet
A cadet is a trainee to become an officer in the military, often a person who is a junior trainee. The term comes from the term "cadet" for younger sons of a noble family.- Military context :...
organizations around the world, such as the Air Training Corps
Air Training Corps
The Air Training Corps , commonly known as the Air Cadets, is a cadet organisation based in the United Kingdom. It is a voluntary youth group which is part of the Air Cadet Organisation and the Royal Air Force . It is supported by the Ministry of Defence, with a regular RAF Officer, currently Air...
, Combined Cadet Force
Combined Cadet Force
The Combined Cadet Force is a Ministry of Defence sponsored youth organisation in the United Kingdom. Its aim is to "provide a disciplined organisation in a school so that pupils may develop powers of leadership by means of training to promote the qualities of responsibility, self reliance,...
(RAF Section), the Australian Air Force Cadets and the Royal Canadian Air Cadets
Royal Canadian Air Cadets
Royal Canadian Air Cadets is a Canadian national youth program for persons aged 12 to 18. It is administered by the Canadian Forces and funded through the Department of National Defence with additional support from the civilian Air Cadet League of Canada...
.
The source of this article is wikipedia, the free encyclopedia.  The text of this article is licensed under the GFDL.