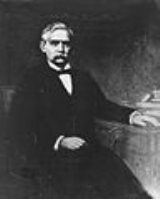 Encyclopedia
William Lyne Wilson was a Bourbon Democrat
Bourbon Democrat
Bourbon Democrat was a term used in the United States from 1876 to 1904 to refer to a member of the Democratic Party, conservative or classical liberal, especially one who supported President Grover Cleveland in 1884–1888/1892–1896 and Alton B. Parker in 1904. After 1904, the Bourbons faded away...
politician and lawyer from West Virginia
West Virginia
West Virginia is a state in the Appalachian and Southeastern regions of the United States, bordered by Virginia to the southeast, Kentucky to the southwest, Ohio to the northwest, Pennsylvania to the northeast and Maryland to the east...
.

Born in Charles Town, Virginia
Charles Town, West Virginia
Charles Town is a city in and the county seat of Jefferson County, West Virginia, United States. The population was 2,907 at the 2000 census. Due to its similar name, travelers have sometimes confused this city with the state's capital, Charleston.-History:...
(now West Virginia
West Virginia
West Virginia is a state in the Appalachian and Southeastern regions of the United States, bordered by Virginia to the southeast, Kentucky to the southwest, Ohio to the northwest, Pennsylvania to the northeast and Maryland to the east...
), Wilson attended Charles Town Academy, graduated from Columbian College in 1860 and subsequently studied at the University of Virginia
University of Virginia
The University of Virginia is a public research university located in Charlottesville, Virginia, United States, founded by Thomas Jefferson...
. During the Civil War
American Civil War
The American Civil War was a civil war fought in the United States of America. In response to the election of Abraham Lincoln as President of the United States, 11 southern slave states declared their secession from the United States and formed the Confederate States of America ; the other 25...
, he enlisted in the Confederate Army
Confederate States Army
The Confederate States Army was the army of the Confederate States of America while the Confederacy existed during the American Civil War. On February 8, 1861, delegates from the seven Deep South states which had already declared their secession from the United States of America adopted the...
and served as a private
Private (rank)
A Private is a soldier of the lowest military rank .In modern military parlance, 'Private' is shortened to 'Pte' in the United Kingdom and other Commonwealth countries and to 'Pvt.' in the United States.Notably both Sir Fitzroy MacLean and Enoch Powell are examples of, rare, rapid career...
in the 12th Virginia Cavalry. For several years, he taught school at Columbian College during which he graduated from law school and was admitted to the bar
Admission to the bar in the United States
In the United States, admission to the bar is the granting of permission by a particular court system to a lawyer to practice law in that system. Each U.S. state and similar jurisdiction has its own court system and sets its own rules for bar admission , which can lead to different admission...
in 1869, commencing practice in Charles Town.

After leaving Congress, Wilson was appointed Postmaster General
United States Postmaster General
The United States Postmaster General is the Chief Executive Officer of the United States Postal Service. The office, in one form or another, is older than both the United States Constitution and the United States Declaration of Independence...
in the cabinet
United States Cabinet
The Cabinet of the United States is composed of the most senior appointed officers of the executive branch of the federal government of the United States, which are generally the heads of the federal executive departments...
of President
President of the United States
The President of the United States of America is the head of state and head of government of the United States. The president leads the executive branch of the federal government and is the commander-in-chief of the United States Armed Forces....
Grover Cleveland
Grover Cleveland
Stephen Grover Cleveland was the 22nd and 24th president of the United States. Cleveland is the only president to serve two non-consecutive terms and therefore is the only individual to be counted twice in the numbering of the presidents...
and served from 1895 to 1897. During that time, future Secretary of War
United States Secretary of War
The Secretary of War was a member of the United States President's Cabinet, beginning with George Washington's administration. A similar position, called either "Secretary at War" or "Secretary of War," was appointed to serve the Congress of the Confederation under the Articles of Confederation...
Newton D. Baker
Newton D. Baker
Newton Diehl Baker, Jr. was an American politician who belonged to the Democratic Party. He served as the 37th mayor of Cleveland, Ohio from 1912 to 1915 and as U.S. Secretary of War from 1916 to 1921.-Early years:...
served as his private secretary. In 1896, he broke party lines by opposing the Free Silver Movement
Free Silver
Free Silver was an important United States political policy issue in the late 19th century and early 20th century. Its advocates were in favor of an inflationary monetary policy using the "free coinage of silver" as opposed to the less inflationary Gold Standard; its supporters were called...
led by Democratic presidential nominee William Jennings Bryan
William Jennings Bryan
William Jennings Bryan was an American politician in the late-19th and early-20th centuries. He was a dominant force in the liberal wing of the Democratic Party, standing three times as its candidate for President of the United States...
and, like many Bourbon Democrats, supported the National Democratic
National Democratic Party (United States)
The National Democratic Party or Gold Democrats was a short-lived political party of Bourbon Democrats, who opposed the regular party nominee William Jennings Bryan in 1896. Most members were admirers of Grover Cleveland. They considered Bryan a dangerous man and charged that his "free silver"...
candidate John McAuley Palmer
John M. Palmer (politician)
John McAuley Palmer , was an Illinois resident, an American Civil War General who fought for the Union, the 15th Governor of Illinois, and presidential candidate of the National Democratic Party in the 1896 election on a platform to defend the gold standard, free trade, and limited...
who supported the traditional gold standard
Gold standard
The gold standard is a monetary system in which the standard economic unit of account is a fixed mass of gold. There are distinct kinds of gold standard...
, limited government
Limited government
Limited government is a government which anything more than minimal governmental intervention in personal liberties and the economy is generally disallowed by law, usually in a written constitution. It is written in the United States Constitution in Article 1, Section 8...
and opposed protectionism
Protectionism
Protectionism is the economic policy of restraining trade between states through methods such as tariffs on imported goods, restrictive quotas, and a variety of other government regulations designed to allow "fair competition" between imports and goods and services produced domestically.This...
.

After leaving office as Postmaster General, Wilson served as president of Washington and Lee University
Washington and Lee University
Washington and Lee University is a private liberal arts college in Lexington, Virginia, United States.The classical school from which Washington and Lee descended was established in 1749 as Augusta Academy, about north of its present location. In 1776 it was renamed Liberty Hall in a burst of...
. He died in Lexington, Virginia
Lexington, Virginia
Lexington is an independent city within the confines of Rockbridge County in the Commonwealth of Virginia. The population was 7,042 in 2010. Lexington is about 55 minutes east of the West Virginia border and is about 50 miles north of Roanoke, Virginia. It was first settled in 1777.It is home to...
, on October 17, 1900 and was interred in Edgehill Cemetery in Charles Town. A portion of U.S. Route 340
U.S. Route 340
U.S. Route 340 is a spur of US 40. It currently runs for from Greenville, Virginia at US 11 to Frederick, Maryland at US 40. Between those two states, US 340 also passes briefly through West Virginia. In Virginia and West Virginia, it is signed north–south...
between Harpers Ferry
Harpers Ferry, West Virginia
Harpers Ferry is a historic town in Jefferson County, West Virginia, United States. In many books the town is called "Harper's Ferry" with an apostrophe....
and Charles Town, West Virginia, is designated the William L. Wilson Freeway in his honor.
The source of this article is wikipedia, the free encyclopedia.  The text of this article is licensed under the GFDL.