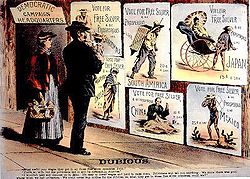 Free Silver was an important United States
United States
The United States of America is a federal constitutional republic comprising fifty states and a federal district...
political
Politics
Politics is a process by which groups of people make collective decisions. The term is generally applied to the art or science of running governmental or state affairs, including behavior within civil governments, but also applies to institutions, fields, and special interest groups such as the...
policy issue in the late 19th century and early 20th century. Its advocates were in favor of an inflationary monetary policy
Monetary policy
Monetary policy is the process by which the monetary authority of a country controls the supply of money, often targeting a rate of interest for the purpose of promoting economic growth and stability. The official goals usually include relatively stable prices and low unemployment...
using the "free coinage of silver" as opposed to the less inflationary Gold Standard
Gold standard
The gold standard is a monetary system in which the standard economic unit of account is a fixed mass of gold. There are distinct kinds of gold standard...
; its supporters were called "Silverites". It largely pitted the financial establishment of the Northeast, who were creditors and would be hurt by inflation, against the more rural areas of the country, who were less affluent and often debtors and would benefit from the lower prices and other perceived benefits of a silver based monetary supply: largely farmers in the Midwest and South, miners in the West, and citizens of farming and silver mining states. Southerners were still chafing against post-Civil War federal government policies and were, together with Midwestern farmers, locked in a bitter struggle with the railroad monopolies, banks, and commodity brokers whose practices kept the farmers deeply in debt while taking the bulk of the farmers' profits (see Farmers' Alliance
Farmers' Alliance
The Farmers Alliance was an organized agrarian economic movement amongst U.S. farmers that flourished in the 1880s. One of the goals of the organization was to end the adverse effects of the crop-lien system on farmers after the American Civil War...
and Populism
Populism
Populism can be defined as an ideology, political philosophy, or type of discourse. Generally, a common theme compares "the people" against "the elite", and urges social and political system changes. It can also be defined as a rhetorical style employed by members of various political or social...
).

To understand exactly what is meant by "free coinage of silver", it is necessary to understand the way mints operated in the days of the gold standard
Gold standard
The gold standard is a monetary system in which the standard economic unit of account is a fixed mass of gold. There are distinct kinds of gold standard...
. Essentially, anyone who possessed uncoined gold, such as successful prospectors, or those to whom they might have sold it, could bring it to one of the United States Mints and trade it for its equivalent in gold coins, less a small deduction for seignorage. Free silver advocates wanted the mints to accept silver on the same principle, so that anyone would be able to deposit silver bullion at a Mint and in return receive nearly its weight in silver dollars and other currency.

Through most of the years when silver dollars and smaller denominations were minted in actual silver, the melt value of the silver was substantially less than their face value. As a result, their monetary value was based on government fiat rather than on the commodity value of their contents, and this became especially true following the huge silver strikes in the West, which further depressed the silver price. From that time until the early 1960s the silver in United States dimes, quarters, halves, and silver dollars was worth only a fraction of their face values. 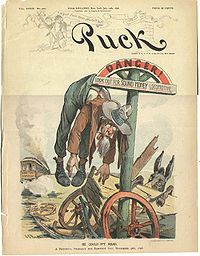 Many populist
Populism
Populism can be defined as an ideology, political philosophy, or type of discourse. Generally, a common theme compares "the people" against "the elite", and urges social and political system changes. It can also be defined as a rhetorical style employed by members of various political or social...
organizations favored a inflationary monetary policy on the grounds that it enabled debtors (often farmers who had mortgages on their land) pay their debts off with cheaper, more readily-available dollars; those who suffered under this policy were the creditors such as banks and landlords. The most vocal and best organized supporters were the silver mine owners (such as William Randolph Hearst
William Randolph Hearst
William Randolph Hearst was an American business magnate and leading newspaper publisher. Hearst entered the publishing business in 1887, after taking control of The San Francisco Examiner from his father...
) and workers, and the western states and territories generally.

The Sherman Silver Purchase Act
Sherman Silver Purchase Act
The Sherman Silver Purchase Act was enacted on July 14, 1890 as a United States federal law. It was named after its author, Senator John Sherman, an Ohio Republican, chairman of the Senate Finance Committee...
of 1890, while falling short of Free Silver's goals, required the U.S. government to buy millions of ounces of silver (driving up the price of the metal and pleasing silver miners) for money (pleasing farmers and many others). However, the U.S. government paid for that silver bullion in gold notes - and actually reduced their coinage of silver. The result was a "run" on the Treasury's gold reserves which was one (among many) reasons for the Panic of 1893 and the onset of the 1890s Depression. Once he regained power, and after the Panic of 1893
Panic of 1893
The Panic of 1893 was a serious economic depression in the United States that began in 1893. Similar to the Panic of 1873, this panic was marked by the collapse of railroad overbuilding and shaky railroad financing which set off a series of bank failures...
had begun, Grover Cleveland
Grover Cleveland
Stephen Grover Cleveland was the 22nd and 24th president of the United States. Cleveland is the only president to serve two non-consecutive terms and therefore is the only individual to be counted twice in the numbering of the presidents...
engineered the repeal of the Act, setting the stage for the key issue of the next presidential election.

The Populist Party
Populist Party (United States)
The People's Party, also known as the "Populists", was a short-lived political party in the United States established in 1891. It was most important in 1892-96, then rapidly faded away...
had a strong Free Silver element. Its subsequent combination with the Democratic Party
Democratic Party (United States)
The Democratic Party is one of two major contemporary political parties in the United States, along with the Republican Party. The party's socially liberal and progressive platform is largely considered center-left in the U.S. political spectrum. The party has the lengthiest record of continuous...
moved the latter from the support of the gold standard which had been the hallmark of the Cleveland
Grover Cleveland
Stephen Grover Cleveland was the 22nd and 24th president of the United States. Cleveland is the only president to serve two non-consecutive terms and therefore is the only individual to be counted twice in the numbering of the presidents...
administration to the Free Silver position epitomized by 1896 presidential nominee William Jennings Bryan
William Jennings Bryan
William Jennings Bryan was an American politician in the late-19th and early-20th centuries. He was a dominant force in the liberal wing of the Democratic Party, standing three times as its candidate for President of the United States...
in his Cross of Gold speech
Cross of Gold speech
The Cross of Gold speech was delivered by William Jennings Bryan at the 1896 Democratic National Convention in Chicago on July 8, 1896. The speech advocated bimetallism. Following the Coinage Act , the United States abandoned its policy of bimetallism and began to operate a de facto gold...
. Bryan's 1896 candidacy was supported by Populists and Silver Republicans as well as Democrats.

The issue was over what would back the US currency. The two options were: gold (wanted by the Goldbugs and William McKinley
William McKinley
William McKinley, Jr. was the 25th President of the United States . He is best known for winning fiercely fought elections, while supporting the gold standard and high tariffs; he succeeded in forging a Republican coalition that for the most part dominated national politics until the 1930s...
) and silver (wanted by the Silverite
Silverite
The Silverites were members of a political movement in the United States in the late-19th century that advocated that silver should continue to be a monetary standard along with gold, as authorized under the Coinage Act of 1792...
s and Bryan). Unbacked paper (wanted by the Greenbacks
United States Greenback Party
The Greenback Party was an American political party with an anti-monopoly ideology that was active between 1874 and 1884. Its name referred to paper money, or "greenbacks," that had been issued during the American Civil War and afterward...
) represented a third option. Free Silver was a political movement for "Pro Silver".

The city voters—especially German Americans—overwhelmingly rejected the Free Silver cause because it would lead to economic disaster, unemployment, and higher prices. The diversified farmers of the Midwest and East opposed it as well, but the cotton farmers in the South and the wheat farmers in the West were enthusiastic for free silver. Bryan tried again in 1900 to raise the issue but lost by larger margins, and when he dropped the issue it fell out of circulation.

Free Silver became increasingly associated with Populism, unions, and the fight of ordinary Americans against the bankers, Railroad monopolists, and the Robber barons
Robber barons
Robber baron may mean:*Robber baron, German nobles who levied illegal tolls in the twelfth and thirteenth centuries*Robber baron , a pejorative term for certain 19th to early 20th century American industrialists...
of the Laissez-Faire
Laissez-faire
In economics, laissez-faire describes an environment in which transactions between private parties are free from state intervention, including restrictive regulations, taxes, tariffs and enforced monopolies....
Capitalism era and was referred to as the "People's Money" (as opposed to the gold-based currency, which was portrayed by the Populists as the money of "exploitation" and "oppression"). Around the time of the Panic of 1893
Panic of 1893
The Panic of 1893 was a serious economic depression in the United States that began in 1893. Similar to the Panic of 1873, this panic was marked by the collapse of railroad overbuilding and shaky railroad financing which set off a series of bank failures...
, William H. Harbey's popular pamphlet Coin's Financial School
Coin's Financial School
right|thumbCoin's Financial School was a popular pamphlet written in 1893 that helped popularize the free silver and populist movements. The author of the text "Coin", William Hope Harvey, would later go on to aid William Jennings Bryan in his bid for the presidency and would run for the presidency...
illustrated the "restorative" properties of silver; through devaluation of the currency, closed factories would reopen, darkened furnaces would be relit, et cetera.