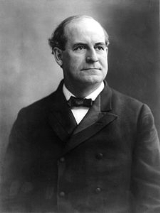 Why was he against the treaty of paris?
More

How has Bryan been portrayed in political cartoons?

Bryan and the Theory of Evolution
More

Success is brought by continued labor and continued watchfulness. We must struggle on, not for one moment hesitate, nor take one backward step.

A man who murders another shortens by a few brief years the life of a human being; but he who votes to increase the burden of debts upon the people of the United States assumes a graver responsibility.

Next to the ministry I know of no more noble profession than the law. The object aimed at is justice, equal and exact, and if it does not reach that end at once it is because the stream is diverted by selfishness or checked by ignorance. Its principles ennoble and its practice elevates.

You cannot judge a man's life by the success of a moment, by the victory of an hour, or even by the results of a year. You must view his life as a whole. You must stand where you can see the man as he treads the entire path that leads from the cradle to the grave — now crossing the plain, now climbing the steeps, now passing through pleasant fields, now wending his way with difficulty between rugged rocks — tempted, tried, tested, triumphant.

"The Law and the Gospel"

I have been so satisfied with the Christian religion that I have spent no time trying to find arguments against it.… I am not afraid now that you will show me any. I feel that I have enough information to live and die by.

The only purpose Mr. Darrow has is to slur at the Bible, but I will answer his question. I will answer it all at once, and I have no objection in the world. I want the world to know that this man, who does not believe in a God, is trying to use a court in Tennessee to slur at it.