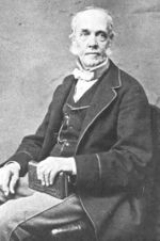 Encyclopedia
William Lassell FRS (18 June 1799 – 5 October 1880) was an English
England
England is a country that is part of the United Kingdom. It shares land borders with Scotland to the north and Wales to the west; the Irish Sea is to the north west, the Celtic Sea to the south west, with the North Sea to the east and the English Channel to the south separating it from continental...
merchant and astronomer
Astronomer
An astronomer is a scientist who studies celestial bodies such as planets, stars and galaxies.Historically, astronomy was more concerned with the classification and description of phenomena in the sky, while astrophysics attempted to explain these phenomena and the differences between them using...
.

Born in Bolton
Bolton
Bolton is a town in Greater Manchester, in the North West of England. Close to the West Pennine Moors, it is north west of the city of Manchester. Bolton is surrounded by several smaller towns and villages which together form the Metropolitan Borough of Bolton, of which Bolton is the...
and educated in Rochdale after the death of his father, he was apprenticed from 1814 to 1821 to a merchant in Liverpool. He then made his fortune as a beer brewer
Brewing
Brewing is the production of beer through steeping a starch source in water and then fermenting with yeast. Brewing has taken place since around the 6th millennium BCE, and archeological evidence suggests that this technique was used in ancient Egypt...
, which enabled him to indulge his interest in astronomy
Astronomy
Astronomy is a natural science that deals with the study of celestial objects and phenomena that originate outside the atmosphere of Earth...
. He built an observatory at Starfield near Liverpool
Liverpool
Liverpool is a city and metropolitan borough of Merseyside, England, along the eastern side of the Mersey Estuary. It was founded as a borough in 1207 and was granted city status in 1880...
with a 24 inches (609.6 mm) reflector telescope
Telescope
A telescope is an instrument that aids in the observation of remote objects by collecting electromagnetic radiation . The first known practical telescopes were invented in the Netherlands at the beginning of the 1600s , using glass lenses...
, for which he pioneered the use of an equatorial mount
Equatorial mount
An equatorial mount is a mount for instruments that follows the rotation of the sky by having one rotational axis parallel to the Earth's axis of rotation. This type of mount is used for astronomical telescopes and cameras...
for easy tracking of objects as the earth rotates. He ground and polished the mirror himself, using equipment he constructed. The observatory was later (1854) moved further out of Liverpool to Bradstones.

In 1846 Lassell discovered Triton
Triton (moon)
Triton is the largest moon of the planet Neptune, discovered on October 10, 1846, by English astronomer William Lassell. It is the only large moon in the Solar System with a retrograde orbit, which is an orbit in the opposite direction to its planet's rotation. At 2,700 km in diameter, it is...
, the largest moon
Natural satellite
A natural satellite or moon is a celestial body that orbits a planet or smaller body, which is called its primary. The two terms are used synonymously for non-artificial satellites of planets, of dwarf planets, and of minor planets....
of Neptune
Neptune
Neptune is the eighth and farthest planet from the Sun in the Solar System. Named for the Roman god of the sea, it is the fourth-largest planet by diameter and the third largest by mass. Neptune is 17 times the mass of Earth and is slightly more massive than its near-twin Uranus, which is 15 times...
, just 17 days after the discovery of Neptune itself by German
Germany
Germany , officially the Federal Republic of Germany , is a federal parliamentary republic in Europe. The country consists of 16 states while the capital and largest city is Berlin. Germany covers an area of 357,021 km2 and has a largely temperate seasonal climate...
astronomer Johann Gottfried Galle
Johann Gottfried Galle
Johann Gottfried Galle was a German astronomer at the Berlin Observatory who, on 23 September 1846, with the assistance of student Heinrich Louis d'Arrest, was the first person to view the planet Neptune, and know what he was looking at...
. In 1848 he independently co-discovered Hyperion
Hyperion (moon)
Hyperion , also known as Saturn VII, is a moon of Saturn discovered by William Cranch Bond, George Phillips Bond and William Lassell in 1848. It is distinguished by its irregular shape, its chaotic rotation, and its unexplained sponge-like appearance...
, a moon of Saturn
Saturn
Saturn is the sixth planet from the Sun and the second largest planet in the Solar System, after Jupiter. Saturn is named after the Roman god Saturn, equated to the Greek Cronus , the Babylonian Ninurta and the Hindu Shani. Saturn's astronomical symbol represents the Roman god's sickle.Saturn,...
. In 1851 he discovered Ariel
Ariel (moon)
Ariel is the brightest and fourth-largest of the 27 known moons of Uranus. Ariel orbits and rotates in the equatorial plane of Uranus, which is almost perpendicular to the orbit of Uranus, and so has an extreme seasonal cycle....
and Umbriel
Umbriel (moon)
Umbriel is a moon of Uranus discovered on October 24, 1851, by William Lassell. It was discovered at the same time as Ariel and named after a character in Alexander Pope's poem The Rape of the Lock. Umbriel consists mainly of ice with a substantial fraction of rock, and may be differentiated into a...
, two new moons of Uranus
Uranus
Uranus is the seventh planet from the Sun. It has the third-largest planetary radius and fourth-largest planetary mass in the Solar System. It is named after the ancient Greek deity of the sky Uranus , the father of Cronus and grandfather of Zeus...
.

When Queen Victoria
Victoria of the United Kingdom
Victoria was the monarch of the United Kingdom of Great Britain and Ireland from 20 June 1837 until her death. From 1 May 1876, she used the additional title of Empress of India....
visited Liverpool
Liverpool
Liverpool is a city and metropolitan borough of Merseyside, England, along the eastern side of the Mersey Estuary. It was founded as a borough in 1207 and was granted city status in 1880...
in 1851, Lassell was the only local she specifically requested to meet.

In 1855, he built a 48 inches (1,219.2 mm) telescope, which he installed in Malta
Malta
Malta , officially known as the Republic of Malta , is a Southern European country consisting of an archipelago situated in the centre of the Mediterranean, south of Sicily, east of Tunisia and north of Libya, with Gibraltar to the west and Alexandria to the east.Malta covers just over in...
because of the better observing conditions compared to England. On his return to the UK after several years in Malta he moved to Maidenhead and operated his 2-foot telescope in an observatory there.

He won the Gold Medal of the Royal Astronomical Society
Gold Medal of the Royal Astronomical Society
-History:In the early years, more than one medal was often awarded in a year, but by 1833 only one medal was being awarded per year. This caused a problem when Neptune was discovered in 1846, because many felt an award should jointly be made to John Couch Adams and Urbain Le Verrier...
in 1849, and served as its president for two years starting in 1870. He was also elected a Fellow of the Royal Society in 1849 and won their Royal Medal
Royal Medal
The Royal Medal, also known as The Queen's Medal, is a silver-gilt medal awarded each year by the Royal Society, two for "the most important contributions to the advancement of natural knowledge" and one for "distinguished contributions in the applied sciences" made within the Commonwealth of...
in 1858.

Lassell died in Maidenhead
Maidenhead
Maidenhead is a town and unparished area within the Royal Borough of Windsor and Maidenhead, in Berkshire, England. It lies on the River Thames and is situated west of Charing Cross in London.-History:...
in 1880. Upon his death, he left a fortune of £80,000 (equivalent to millions of American dollars
United States dollar
The United States dollar , also referred to as the American dollar, is the official currency of the United States of America. It is divided into 100 smaller units called cents or pennies....
by today's standards). His telescope was presented to the Royal Observatory in Greenwich.

The crater Lassell
Lassell (lunar crater)
Lassell is a small lunar crater that is located in the eastern part of the Mare Nubium. It lies to the west of the crater Alpetragius, and southwest of Alphonsus....
on the Moon
Moon
The Moon is Earth's only known natural satellite,There are a number of near-Earth asteroids including 3753 Cruithne that are co-orbital with Earth: their orbits bring them close to Earth for periods of time but then alter in the long term . These are quasi-satellites and not true moons. For more...
, a crater
Impact crater
In the broadest sense, the term impact crater can be applied to any depression, natural or manmade, resulting from the high velocity impact of a projectile with a larger body...
on Mars
Mars
Mars is the fourth planet from the Sun in the Solar System. The planet is named after the Roman god of war, Mars. It is often described as the "Red Planet", as the iron oxide prevalent on its surface gives it a reddish appearance...
, the asteroid
Asteroid
Asteroids are a class of small Solar System bodies in orbit around the Sun. They have also been called planetoids, especially the larger ones...
2636 Lassell
2636 Lassell
2636 Lassell is a main-belt asteroid discovered on February 20, 1982 by E. Bowell at Flagstaff .- External links :*...
and a ring of Neptune
Rings of Neptune
The rings of Neptune consist primarily of five principal rings predicted in 1984 by André Brahic and imaged in 1989 by the Voyager 2 spacecraft...
are named in his honour.