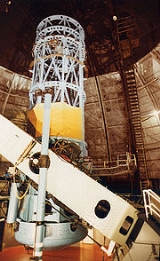 Overview
A telescope is an instrument that aids in the observation of remote objects by collecting electromagnetic radiation
Electromagnetic radiation
Electromagnetic radiation is a form of energy that exhibits wave-like behavior as it travels through space...
(such as visible light). The first known practical telescopes were invented in the Netherlands
Netherlands
The Netherlands is a constituent country of the Kingdom of the Netherlands, located mainly in North-West Europe and with several islands in the Caribbean. Mainland Netherlands borders the North Sea to the north and west, Belgium to the south, and Germany to the east, and shares maritime borders...
at the beginning of the 1600s (the 17th century), using glass lenses. They found use in terrestrial applications and astronomy.

what 2 phenomena of light do the functions of a telescope depend?
More
x