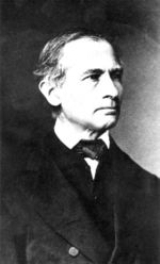 Encyclopedia
Johann Gottfried Galle was a German astronomer
Astronomer
An astronomer is a scientist who studies celestial bodies such as planets, stars and galaxies.Historically, astronomy was more concerned with the classification and description of phenomena in the sky, while astrophysics attempted to explain these phenomena and the differences between them using...
at the Berlin Observatory
Berlin Observatory
The Berlin Observatory is a series of observatories and related organizations in and around the city of Berlin in Germany, starting from the 18th century...
who, on 23 September 1846, with the assistance of student Heinrich Louis d'Arrest
Heinrich Louis d'Arrest
Heinrich Louis d'Arrest was a German astronomer, born in Berlin. His name is sometimes given as Heinrich Ludwig d'Arrest....
, was the first person to view the planet Neptune
Discovery of Neptune
Neptune was mathematically predicted before it was directly observed. With a prediction by Urbain Le Verrier, telescopic observations confirming the existence of a major planet were made on the night of September 23, 1846, and into the early morning of the 24th, at the Berlin Observatory, by...
, and know what he was looking at. He used the calculations of Urbain Le Verrier to know where to look.

Born in Radis
Radis
Radis is a village and a former municipality in Wittenberg district in Saxony-Anhalt, Germany. Since 1 January 2010, it is part of the town Kemberg.- Geography :...
, Galle studied at the University of Berlin
Humboldt University of Berlin
The Humboldt University of Berlin is Berlin's oldest university, founded in 1810 as the University of Berlin by the liberal Prussian educational reformer and linguist Wilhelm von Humboldt, whose university model has strongly influenced other European and Western universities...
from 1830-33. He had started to work as an assistant to Johann Franz Encke
Johann Franz Encke
Johann Franz Encke was a German astronomer. Among his activities, he worked on the calculation of the periods of comets and asteroids, measured the distance from the earth to the sun, and made observations on the planet Saturn.-Biography:Encke was born in Hamburg, where his father was a...
in 1835 immediately following the completion of the Berlin observatory. In 1851 he moved to Breslau (today Wrocław) to become professor of astronomy and the director of the local observatory.

Throughout his career he studied comet
Comet
A comet is an icy small Solar System body that, when close enough to the Sun, displays a visible coma and sometimes also a tail. These phenomena are both due to the effects of solar radiation and the solar wind upon the nucleus of the comet...
s, and in 1894 (with the help of his son Andreas Galle) he published a list with 414 comets. He himself had previously discovered three comets in the short span from 2 December 1839 to 6 March 1840. He died in Potsdam
Potsdam
Potsdam is the capital city of the German federal state of Brandenburg and part of the Berlin/Brandenburg Metropolitan Region. It is situated on the River Havel, southwest of Berlin city centre....
at age 98.

Two crater
Impact crater
In the broadest sense, the term impact crater can be applied to any depression, natural or manmade, resulting from the high velocity impact of a projectile with a larger body...
s, one on the Moon
Galle (lunar crater)
Galle is a small lunar crater on the Mare Frigoris, to the north-northeast of the prominent crater Aristoteles. The formation is nearly circular, with a sharp-edged rim and little appearance of erosion...
and the "happy face" one on Mars
Galle (Martian crater)
Galle is a crater on Mars. It is located on the eastern rim of the huge impact basin Argyre Planitia. It is named after the astronomer Johann Gottfried Galle....
, the asteroid 2097 Galle
2097 Galle
2097 Galle is a main-belt asteroid discovered on August 11, 1953 by Reinmuth, K. at Heidelberg.- External links :*...
, and a ring of Neptune
Rings of Neptune
The rings of Neptune consist primarily of five principal rings predicted in 1984 by André Brahic and imaged in 1989 by the Voyager 2 spacecraft...
have been named in his honor.

Galle's Ph.D. thesis, finished in the year of 1845, was a reduction and critical discussion of Ole Rømer's observation of meridian
Meridian (astronomy)
This article is about the astronomical concept. For other uses of the word, see Meridian.In the sky, a meridian is an imaginary great circle on the celestial sphere. It passes through the north point on the horizon, through the celestial pole, up to the zenith, through the south point on the...
transits of star
Star
A star is a massive, luminous sphere of plasma held together by gravity. At the end of its lifetime, a star can also contain a proportion of degenerate matter. The nearest star to Earth is the Sun, which is the source of most of the energy on Earth...
s and planet
Planet
A planet is a celestial body orbiting a star or stellar remnant that is massive enough to be rounded by its own gravity, is not massive enough to cause thermonuclear fusion, and has cleared its neighbouring region of planetesimals.The term planet is ancient, with ties to history, science,...
s on the days from 20 October to 23 October 1706. Around 1845 he sent a copy of his thesis to Urbain Le Verrier, but only received an answer a year later on 18 September 1846. It reached Galle on 23 September and in it Le Verrier asked him to look at a certain region of sky to find a predicted new planet, which would explain the perturbations of the planet Uranus.
The same night, after Encke gave him the permission against his own judgment, an object fitting the description was found, and it was confirmed as being a planet over the next two evenings.