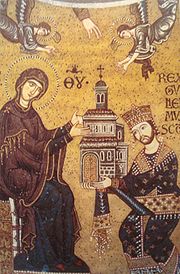 William II called the Good, was king of Sicily
Kingdom of Sicily
The Kingdom of Sicily was a state that existed in the south of Italy from its founding by Roger II in 1130 until 1816. It was a successor state of the County of Sicily, which had been founded in 1071 during the Norman conquest of southern Italy...
from 1166 to 1189. William's character is very indistinct. Lacking in military enterprise, secluded and pleasure-loving, he seldom emerged from his palace life at Palermo. Yet his reign is marked by an ambitious foreign policy and a vigorous diplomacy. Champion of the papacy and in secret league with the Lombard
Lombardy
Lombardy is one of the 20 regions of Italy. The capital is Milan. One-sixth of Italy's population lives in Lombardy and about one fifth of Italy's GDP is produced in this region, making it the most populous and richest region in the country and one of the richest in the whole of Europe...
cities he was able to defy the common enemy, Frederick I Barbarossa
Frederick I, Holy Roman Emperor
Frederick I Barbarossa was a German Holy Roman Emperor. He was elected King of Germany at Frankfurt on 4 March 1152 and crowned in Aachen on 9 March, crowned King of Italy in Pavia in 1155, and finally crowned Roman Emperor by Pope Adrian IV, on 18 June 1155, and two years later in 1157 the term...
. In the Divine Comedy, Dante
Dante Alighieri
Durante degli Alighieri, mononymously referred to as Dante , was an Italian poet, prose writer, literary theorist, moral philosopher, and political thinker. He is best known for the monumental epic poem La commedia, later named La divina commedia ...
places William II in Paradise. He is also referred to in Boccaccio's Decameron (tale V.7).

William was only eleven years old at the death of his father William I
William I of Sicily
William I , called the Bad or the Wicked, was the second king of Sicily, ruling from his father's death in 1154 to his own...
, when he was placed under the regency of his mother, Margaret of Navarre. Until the king was declared adult in 1171 the government was controlled first by the chancellor Stephen du Perche
Stephen du Perche
Stephen du Perche was the chancellor of the Kingdom of Sicily and Archbishop of Palermo during the early regency of his cousin, Queen Margaret of Navarre ....
, cousin of Margaret (1166–1168), and then by Walter Ophamil, archbishop of Palermo
Palermo
Palermo is a city in Southern Italy, the capital of both the autonomous region of Sicily and the Province of Palermo. The city is noted for its history, culture, architecture and gastronomy, playing an important role throughout much of its existence; it is over 2,700 years old...
, and Matthew of Ajello
Matthew of Ajello
Matthew of Ajello was a high-ranking member of the Norman court of the Kingdom of Sicily in the 12th century.He first appears as the notary of the Admiral Maio of Bari who drew up the Treaty of Benevento of 1156...
, the vice-chancellor. In 1174 and 1175 William made treaties with Genoa
Genoa
Genoa |Ligurian]] Zena ; Latin and, archaically, English Genua) is a city and an important seaport in northern Italy, the capital of the Province of Genoa and of the region of Liguria....
and Venice
Venice
Venice is a city in northern Italy which is renowned for the beauty of its setting, its architecture and its artworks. It is the capital of the Veneto region...
and his marriage in February 1177 with Joan, daughter of Henry II of England
Henry II of England
Henry II ruled as King of England , Count of Anjou, Count of Maine, Duke of Normandy, Duke of Aquitaine, Duke of Gascony, Count of Nantes, Lord of Ireland and, at various times, controlled parts of Wales, Scotland and western France. Henry, the great-grandson of William the Conqueror, was the...
and Eleanor of Aquitaine
Eleanor of Aquitaine
Eleanor of Aquitaine was one of the wealthiest and most powerful women in Western Europe during the High Middle Ages. As well as being Duchess of Aquitaine in her own right, she was queen consort of France and of England...
, marks his high position in European politics.

In July 1177, William sent a delegation of Archbishop Romuald of Salerno and Count Roger of Andria
Roger of Andria
Roger, count of Andria and Great Chamberlain of Sicily, was a claimant for the Sicilian throne after the death of William II in 1189. He is claimed by some to have been a great-grandson of Drogo of Hauteville, but this cannot be proven....
to sign the Treaty of Venice
Treaty of Venice
The Treaty or Peace of Venice, 1177, was an important peace treaty between the papacy and its allies, the north Italian city-states of the Lombard League, and Frederick I, Holy Roman Emperor...
with the emperor. To secure the peace, he sanctioned the marriage of his aunt Constance
Constance of Sicily
Constance of Hauteville was the heiress of the Norman kings of Sicily and the wife of Henry VI, Holy Roman Emperor...
, daughter of Roger II
Roger II of Sicily
Roger II was King of Sicily, son of Roger I of Sicily and successor to his brother Simon. He began his rule as Count of Sicily in 1105, later became Duke of Apulia and Calabria , then King of Sicily...
, with Frederick's son Henry, afterwards the emperor Henry VI
Henry VI, Holy Roman Emperor
Henry VI was King of Germany from 1190 to 1197, Holy Roman Emperor from 1191 to 1197 and King of Sicily from 1194 to 1197.-Early years:Born in Nijmegen,...
, causing a general oath to be taken to her as his successor in case of his death without heirs. This step, fatal to the Norman
Normans
The Normans were the people who gave their name to Normandy, a region in northern France. They were descended from Norse Viking conquerors of the territory and the native population of Frankish and Gallo-Roman stock...
kingdom, was possibly taken that William might devote himself to foreign conquests.

The troops then marched upon the capital, but the army of the emperor Isaac Angelus defeated the invaders on the banks of the Strymon
Struma River
The Struma or Strymónas is a river in Bulgaria and Greece. Its ancient name was Strymōn . Its catchment area is 10,800 km²...
(7 September 1185). Thessalonica was at once abandoned and in 1189 William made peace with Isaac, abandoning all the conquests. He was now planning to induce the crusading armies of the West to pass through his territories, and seemed about to play a leading part in the Third Crusade
Third Crusade
The Third Crusade , also known as the Kings' Crusade, was an attempt by European leaders to reconquer the Holy Land from Saladin...
. His admiral Margarito, a naval genius equal to George of Antioch
George of Antioch
George of Antioch was the first true ammiratus ammiratorum, successor of the great Christodulus. George was a Greek Melchite, born in Antioch, whence he moved with his father, Michael, and mother to Tunisia. His parents found employment under the Zirid Sultan, Tamim ibn Muizz...
, with 60 vessels kept the eastern Mediterranean open for the Franks
Franks
The Franks were a confederation of Germanic tribes first attested in the third century AD as living north and east of the Lower Rhine River. From the third to fifth centuries some Franks raided Roman territory while other Franks joined the Roman troops in Gaul. Only the Salian Franks formed a...
, and forced the all-victorious Saladin to retire from before Tripoli
Tripoli, Lebanon
Tripoli is the largest city in northern Lebanon and the second-largest city in Lebanon. Situated 85 km north of the capital Beirut, Tripoli is the capital of the North Governorate and the Tripoli District. Geographically located on the east of the Mediterranean, the city's history dates back...
in the spring of 1188. 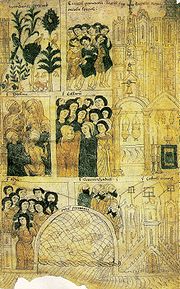 In November 1189 William died at Palermo
Palermo
Palermo is a city in Southern Italy, the capital of both the autonomous region of Sicily and the Province of Palermo. The city is noted for its history, culture, architecture and gastronomy, playing an important role throughout much of its existence; it is over 2,700 years old...
, leaving no children. Though Orderic Vitalis
Orderic Vitalis
Orderic Vitalis was an English chronicler of Norman ancestry who wrote one of the great contemporary chronicles of 11th and 12th century Normandy and Anglo-Norman England. The modern biographer of Henry I of England, C...
records a (presumably short-lived) son in 1181: Bohemond, Duke of Apulia
Bohemond, Duke of Apulia
Bohemond or Boamund is the only recorded son of William II of Sicily and his wife Joanna of England.According to Robert of Torigni, in Normandy, he was born in 1182 and created duke of Apulia...
. His title of "the Good" is due perhaps less to his character than to the cessation of internal troubles in his reign.
The source of this article is wikipedia, the free encyclopedia.  The text of this article is licensed under the GFDL.