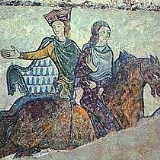 Overview
Eleanor of Aquitaine (1122 or 1124 – 1 April 1204) was one of the wealthiest and most powerful women in Western Europe during the High Middle Ages
High Middle Ages
The High Middle Ages was the period of European history around the 11th, 12th, and 13th centuries . The High Middle Ages were preceded by the Early Middle Ages and followed by the Late Middle Ages, which by convention end around 1500....
. As well as being Duchess of Aquitaine in her own right, she was queen consort of France (1137–1152) and of England (1154–1189). She was the patroness of such literary figures as Wace
Wace
Wace was a Norman poet, who was born in Jersey and brought up in mainland Normandy , ending his career as Canon of Bayeux.-Life:...
, Benoît de Sainte-More, and Chrétien de Troyes
Chrétien de Troyes
Chrétien de Troyes was a French poet and trouvère who flourished in the late 12th century. Perhaps he named himself Christian of Troyes in contrast to the illustrious Rashi, also of Troyes...
.

Eleanor succeeded her father as suo jure
Suo jure
Suo jure is a Latin phrase meaning "in her [or his] own right".It is commonly encountered in the context of titles of nobility, especially in cases where a wife may hold a title in her own right rather than through her marriage....
Duchess of Aquitaine and Countess of Poitiers at the age of fifteen, and thus became the most eligible bride in Europe.

Whta type of house did she live in after she moved.
More
x