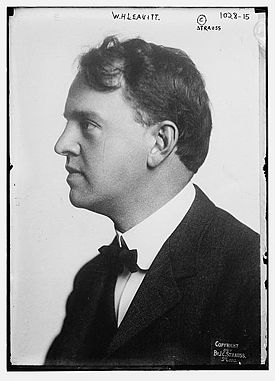 William Homer Leavitt was an American portrait painter
Portrait painting
Portrait painting is a genre in painting, where the intent is to depict the visual appearance of the subject. Beside human beings, animals, pets and even inanimate objects can be chosen as the subject for a portrait...
who married the daughter of politician William Jennings Bryan
William Jennings Bryan
William Jennings Bryan was an American politician in the late-19th and early-20th centuries. He was a dominant force in the liberal wing of the Democratic Party, standing three times as its candidate for President of the United States...
. For a time, Leavitt was a sought-after society portraitist, until he departed for Paris
Paris
Paris is the capital and largest city in France, situated on the river Seine, in northern France, at the heart of the Île-de-France region...
to pursue his art. He was subsequently divorced by his wife, and his two children were raised by their politician grandfather. Leavitt's two children became the subject of a heated custody battle chronicled in the newspapers of the day.

William Homer Leavitt was born in Scituate, Massachusetts
Scituate, Massachusetts
Scituate is a seacoast town in Plymouth County, Massachusetts, United States, on the South Shore, midway between Boston and Plymouth. The population was 18,133 at the 2010 census....
, to Aaron Littlefield Leavitt and his wife Sarah (Clark) Leavitt. The family subsequently removed in 1880 to Newport, Rhode Island
Newport, Rhode Island
Newport is a city on Aquidneck Island in Newport County, Rhode Island, United States, about south of Providence. Known as a New England summer resort and for the famous Newport Mansions, it is the home of Salve Regina University and Naval Station Newport which houses the United States Naval War...
, where William Homer Leavitt, having studied art in Paris, returned and set himself up as a society portrait painter. He was much in demand, and among the many well-known figures he painted was United States General Joseph Wheeler
Joseph Wheeler
Joseph Wheeler was an American military commander and politician. He has the rare distinction of serving as a general during war time for two opposing forces: first as a noted cavalry general in the Confederate States Army in the 1860s during the American Civil War, and later as a general in the...
, who after the portrait session lent Leavitt his black horse, Alabama. The horse bucked and threw Leavitt onto Newport's Bellevue Avenue
Bellevue Avenue Historic District
The Bellevue Avenue Historic District is located along and around Bellevue Avenue in Newport, Rhode Island, United States. Its property is almost exclusively residential, including many of the mansions built by affluent summer vacationers in the city around the turn of the 20th century, including...
. Initially Leavitt was not expected to recover, although he did later make a full recovery.

Two years later Leavitt's career had taken off, causing The New York Times to note that "artist Leavitt has won distinction in his work and has a host of friends in intellectual circles." That same year, 1903, Leavitt went west to Lincoln, Nebraska
Lincoln, Nebraska
The City of Lincoln is the capital and the second-most populous city of the US state of Nebraska. Lincoln is also the county seat of Lancaster County and the home of the University of Nebraska. Lincoln's 2010 Census population was 258,379....
, to paint the portrait of attorney and Presidential candidate William Jennings Bryan. The portrait sessions were repeatedly interrupted by demands on Bryan, and the 32-year-old artist and the politician's 18-year-old daughter Ruth struck up a friendship. On September 17, 1903, the couple announced their plans to marry the next month, meaning the politician's daughter would leave her freshly started career at the University of Nebraska. In announcing the marriage, The New York Times
The New York Times
The New York Times is an American daily newspaper founded and continuously published in New York City since 1851. The New York Times has won 106 Pulitzer Prizes, the most of any news organization...
noted that "Preparations [Were] Under Way to Make It an Elaborate Society Event."

But the big society wedding never transpired. Senator Bryan opposed the match, because of the difference in ages of the couple, as well as the fact that his daughter Ruth had just begun college. The couple married, in a small civil ceremony – described by the newspapers as 'informal' – attended by Bryan's parents, the members of Miss Bryan's college sorority and the widow of the college president and minister who had married William Jennings Bryan and his wife. William Leavitt's mother traveled to Nebraska
Nebraska
Nebraska is a state on the Great Plains of the Midwestern United States. The state's capital is Lincoln and its largest city is Omaha, on the Missouri River....
from Rhode Island
Rhode Island
The state of Rhode Island and Providence Plantations, more commonly referred to as Rhode Island , is a state in the New England region of the United States. It is the smallest U.S. state by area...
for the wedding, which was held in the Bryan home at Lincoln. "In accordance with Miss Bryan's wishes and those of her parents," noted The Oswego Daily Times, "the wedding appointments will be void of any attempt at elaboration."

Following the abbreviated ceremony, painter Leavitt and his wife departed for the East Coast
East Coast of the United States
The East Coast of the United States, also known as the Eastern Seaboard, refers to the easternmost coastal states in the United States, which touch the Atlantic Ocean and stretch up to Canada. The term includes the U.S...
and the South, and briefly to Europe
Europe
Europe is, by convention, one of the world's seven continents. Comprising the westernmost peninsula of Eurasia, Europe is generally 'divided' from Asia to its east by the watershed divides of the Ural and Caucasus Mountains, the Ural River, the Caspian and Black Seas, and the waterways connecting...
where they honeymooned. Later the couple settled at their home at 81 Pelham Street in Newport, Rhode Island
Newport, Rhode Island
Newport is a city on Aquidneck Island in Newport County, Rhode Island, United States, about south of Providence. Known as a New England summer resort and for the famous Newport Mansions, it is the home of Salve Regina University and Naval Station Newport which houses the United States Naval War...
, where Leavitt set himself up in a studio devoted to his portraiture. But the union was apparently rocky from the start, and within six years Leavitt had departed for Paris to paint, and his wife sued for divorce on the grounds of non-support. William Jennings Bryan, a devout Presbyterian, was said to have opposed the divorce on religious grounds. Nevertheless, in 1909 Bryan's daughter's petition for divorce based on non-support was granted. Following the divorce, Ruth Bryan Leavitt (as she continued to be known) often filled her father's shoes in his speaking engagements.

The couple had two children, Ruth and Bryan Leavitt, who were favorites of grandfather William Jennings Bryan. At the Democratic National Convention
Democratic National Convention
The Democratic National Convention is a series of presidential nominating conventions held every four years since 1832 by the United States Democratic Party. They have been administered by the Democratic National Committee since the 1852 national convention...
in Denver
Denver, Colorado
The City and County of Denver is the capital and the most populous city of the U.S. state of Colorado. Denver is a consolidated city-county, located in the South Platte River Valley on the western edge of the High Plains just east of the Front Range of the Rocky Mountains...
, in 1908, newspapers carried photos of Bryan's two grandchildren, and noted that the candidate "was never happier than when bouncing on his knees Ruth and Bryan Leavitt." Following the divorce, grandfather Bryan assumed custody of the two grandchildren. The following year, Ruth Bryan Leavitt married Major Reginald A. Owen, a British Army
Royal Engineers
The Corps of Royal Engineers, usually just called the Royal Engineers , and commonly known as the Sappers, is one of the corps of the British Army....
officer, whom she met while studying voice in Germany
Germany
Germany , officially the Federal Republic of Germany , is a federal parliamentary republic in Europe. The country consists of 16 states while the capital and largest city is Berlin. Germany covers an area of 357,021 km2 and has a largely temperate seasonal climate...
. Following his ex-wife's remarriage, painter Leavitt told reporters that the nuptials – and his ex-wife's presence overseas with her husband – meant that Leavitt would make an attempt to gain custody of his two children. But those attempts were, apparently, in vain, and the two Leavitt children remained with their grandfather Bryan.


Fate of the children and later life

Painter William Homer Leavitt eventually returned to America from Paris, and married as his second wife Gertrude (Leeper) Leavitt, daughter of the Rev. Dr. G. Leeper of Cleveland, Ohio
Cleveland, Ohio
Cleveland is a city in the U.S. state of Ohio and is the county seat of Cuyahoga County, the most populous county in the state. The city is located in northeastern Ohio on the southern shore of Lake Erie, approximately west of the Pennsylvania border...
. Leavitt lived at his old home in Newport with his wife, who died of appendicitis
Appendicitis
Appendicitis is a condition characterized by inflammation of the appendix. It is classified as a medical emergency and many cases require removal of the inflamed appendix, either by laparotomy or laparoscopy. Untreated, mortality is high, mainly because of the risk of rupture leading to...
on April 15, 1914. Leavitt continued to paint and in February 1927 delivered a lecture at the Boston Public Library
Boston Public Library
The Boston Public Library is a municipal public library system in Boston, Massachusetts, United States. It was the first publicly supported municipal library in the United States, the first large library open to the public in the United States, and the first public library to allow people to...
on The Personal Influence of John Ruskin
John Ruskin
John Ruskin was the leading English art critic of the Victorian era, also an art patron, draughtsman, watercolourist, a prominent social thinker and philanthropist. He wrote on subjects ranging from geology to architecture, myth to ornithology, literature to education, and botany to political...
. Leavitt's death from heart disease was reported in "Deaths Registered in the Town of Winthrop, 1946-1951, pg. 32 as August 8, 1951 in Winthrop, Mass. He was buried in Island Cemetery, Newport, Rhode Island, according to the same document.