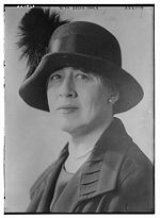 Encyclopedia
Ruth Bryan Owen was the daughter of William Jennings Bryan
William Jennings Bryan
William Jennings Bryan was an American politician in the late-19th and early-20th centuries. He was a dominant force in the liberal wing of the Democratic Party, standing three times as its candidate for President of the United States...
and mother of Helen Rudd Brown. A Democrat
Democratic Party (United States)
The Democratic Party is one of two major contemporary political parties in the United States, along with the Republican Party. The party's socially liberal and progressive platform is largely considered center-left in the U.S. political spectrum. The party has the lengthiest record of continuous...
, in 1929 she became Florida
Florida
Florida is a state in the southeastern United States, located on the nation's Atlantic and Gulf coasts. It is bordered to the west by the Gulf of Mexico, to the north by Alabama and Georgia and to the east by the Atlantic Ocean. With a population of 18,801,310 as measured by the 2010 census, it...
’s (and the South
Southern United States
The Southern United States—commonly referred to as the American South, Dixie, or simply the South—constitutes a large distinctive area in the southeastern and south-central United States...
's) first woman representative in the United States Congress
United States Congress
The United States Congress is the bicameral legislature of the federal government of the United States, consisting of the Senate and the House of Representatives. The Congress meets in the United States Capitol in Washington, D.C....
, coming from Florida’s 4th district. Representative Owen was also the first woman to earn a spot on the House Foreign Affairs Committee. In 1933, she became the first woman ever appointed as a U.S. Ambassador when President Roosevelt appointed her as U.S. Ambassador to Denmark.

In 1903 Ruth Bryan dropped out of the University of Nebraska to marry William H. Leavitt, a well-known Newport, Rhode Island
Newport, Rhode Island
Newport is a city on Aquidneck Island in Newport County, Rhode Island, United States, about south of Providence. Known as a New England summer resort and for the famous Newport Mansions, it is the home of Salve Regina University and Naval Station Newport which houses the United States Naval War...
, portrait painter, who was painting Bryan's father's portrait when the couple met. The couple had two children before divorcing in 1909. She married Reginald Owen, a British Army officer in 1910, bearing two more children. Her second husband died in 1928. She spent three years in Oracabessa, Jamaica, where she oversaw the design and construction of her home, Golden Clouds
Golden Clouds
Golden Clouds was the name given by the first female US ambassador, Ruth Bryan Owen, to her house in Oracabessa, Jamaica. It is situated between Goldeneye , where Ian Fleming wrote many of the James Bond novels, and Noel Coward's Firefly Estate. The ocean front 9-bedroom mansion is located on of...
, which is now operated as a luxury villa
Villa
A villa was originally an ancient Roman upper-class country house. Since its origins in the Roman villa, the idea and function of a villa have evolved considerably. After the fall of the Roman Republic, villas became small farming compounds, which were increasingly fortified in Late Antiquity,...
. Owen kept her home in Jamaica for over three decades and spent many winters there, particularly in later years when she lived in Denmark
Denmark
Denmark is a Scandinavian country in Northern Europe. The countries of Denmark and Greenland, as well as the Faroe Islands, constitute the Kingdom of Denmark . It is the southernmost of the Nordic countries, southwest of Sweden and south of Norway, and bordered to the south by Germany. Denmark...
and New York
New York
New York is a state in the Northeastern region of the United States. It is the nation's third most populous state. New York is bordered by New Jersey and Pennsylvania to the south, and by Connecticut, Massachusetts and Vermont to the east...
. She detailed her time in Jamaica and experiences at Golden Clouds in vivid detail in her book, Caribbean Caravel.

During World War I
World War I
World War I , which was predominantly called the World War or the Great War from its occurrence until 1939, and the First World War or World War I thereafter, was a major war centred in Europe that began on 28 July 1914 and lasted until 11 November 1918...
, she served as a war nurse in the Voluntary Aid Detachment in the Egypt-Palestine campaign, 1915-1918. From 1925 to 1928, she was an administrator at the University of Miami
University of Miami
The University of Miami is a private, non-sectarian university founded in 1925 with its main campus in Coral Gables, Florida, a medical campus in Miami city proper at Civic Center, and an oceanographic research facility on Virginia Key., the university currently enrolls 15,629 students in 12...
.

Owen first ran for office in 1926 for the Democratic nomination for Florida's Fourth Congressional District, losing by fewer than 800 votes. Two years later, after the death of her husband, she ran again. She was elected to Congress (March 4, 1929-March 3, 1933) while a widow and mother of four. Her election was contested on the grounds that she lost her citizenship on her marriage to an alien. By the Cable Act
Cable Act
The Cable Act of 1922 is a United States federal law that reversed former immigration laws regarding marriage, also known as the Married Women's Citizenship Act or the Women's Citizenship Act...
in 1922, she could petition for her citizenship, which she only did in 1925, less than the seven years required by the Constitution. She argued her case before the House Committee on Elections that no American man had ever lost his citizenship by marriage; therefore, Owen argued she lost her citizenship because she was a woman, not because of her marital status. The U.S. House of Representatives voted in her favor. Although Owen won again in 1930, she was defeated for renomination in 1932 by a candidate advocating the repeal of the unpopular Eighteenth Amendment
Eighteenth Amendment to the United States Constitution
The Eighteenth Amendment of the United States Constitution established Prohibition in the United States. The separate Volstead Act set down methods of enforcing the Eighteenth Amendment, and defined which "intoxicating liquors" were prohibited, and which were excluded from prohibition...
.

From 1933 to 1936 she was U.S. Ambassador to Denmark
United States Ambassador to Denmark
The first representative from the United States to Denmark was appointed in 1827 as a Chargé d'Affaires. There followed a series of chargés and ministers until 1890 when the first full ambassador was appointed...
, appointed by President Franklin D. Roosevelt
Franklin D. Roosevelt
Franklin Delano Roosevelt , also known by his initials, FDR, was the 32nd President of the United States and a central figure in world events during the mid-20th century, leading the United States during a time of worldwide economic crisis and world war...
. She served successfully until 1936 when she married Borge Rohde, a Danish Captain of the King's Guard, in July. This gave her dual citizenship as a Dane, so she resigned her post in September.

She was also a delegate to the San Francisco Conference which established the United Nations
United Nations
The United Nations is an international organization whose stated aims are facilitating cooperation in international law, international security, economic development, social progress, human rights, and achievement of world peace...
after World War II
World War II
World War II, or the Second World War , was a global conflict lasting from 1939 to 1945, involving most of the world's nations—including all of the great powers—eventually forming two opposing military alliances: the Allies and the Axis...
. In 1948, President Truman named her an alternate delegate to the U.N. General Assembly.

She died July 26, 1954 in Copenhagen
Copenhagen
Copenhagen is the capital and largest city of Denmark, with an urban population of 1,199,224 and a metropolitan population of 1,930,260 . With the completion of the transnational Øresund Bridge in 2000, Copenhagen has become the centre of the increasingly integrating Øresund Region...
, Denmark
Denmark
Denmark is a Scandinavian country in Northern Europe. The countries of Denmark and Greenland, as well as the Faroe Islands, constitute the Kingdom of Denmark . It is the southernmost of the Nordic countries, southwest of Sweden and south of Norway, and bordered to the south by Germany. Denmark...
and was cremated. Her ashes were interred at Ordrup Cemetery, Copenhagen.

In 1939, Ruth Bryan Owen
Ruth Bryan Owen
Ruth Bryan Owen was the daughter of William Jennings Bryan and mother of Helen Rudd Brown. A Democrat, in 1929 she became Florida’s first woman representative in the United States Congress, coming from Florida’s 4th district. Representative Owen was also the first woman to earn a spot on the...
(1885-1954) and her husband purchased "The Cedars
Alexander McVeigh Miller House
Alexander McVeigh Miller House, also known as the Mittie Clark Miller House and "The Cedars," is a historic home located at Alderson, Greenbrier County, West Virginia. It was built starting in 1881, and is a large, "T"-shaped frame dwelling. It features three-bay verandas and a full height,...
," located at Alderson, West Virginia
Alderson, West Virginia
Alderson, a town in the US State of West Virginia, is split geographically by the Greenbrier River, with portions in both Greenbrier and Monroe Counties. Although split physically by the river, the town functions as one entity, including that of town government...
, and began making repairs. They sold the property in 1945. It was listed on the National Register of Historic Places
National Register of Historic Places
The National Register of Historic Places is the United States government's official list of districts, sites, buildings, structures, and objects deemed worthy of preservation...
in 1978.

In 1992, she was inducted into the Florida Women’s Hall of Fame.