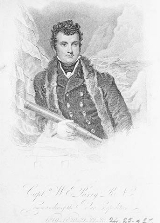 
Sir William Edward Parry (19 December 1790 – 8 or 9 July 1855) was an English rear-admiral
Admiral
Admiral is the rank, or part of the name of the ranks, of the highest naval officers. It is usually considered a full admiral and above vice admiral and below admiral of the fleet . It is usually abbreviated to "Adm" or "ADM"...
and Arctic
Arctic
The Arctic is a region located at the northern-most part of the Earth. The Arctic consists of the Arctic Ocean and parts of Canada, Russia, Greenland, the United States, Norway, Sweden, Finland, and Iceland. The Arctic region consists of a vast, ice-covered ocean, surrounded by treeless permafrost...
explorer, who in 1827 attempted one of the earliest expeditions to the North Pole
North Pole
The North Pole, also known as the Geographic North Pole or Terrestrial North Pole, is, subject to the caveats explained below, defined as the point in the northern hemisphere where the Earth's axis of rotation meets its surface...
. He reached 82°45′ North latitude
Latitude
In geography, the latitude of a location on the Earth is the angular distance of that location south or north of the Equator. The latitude is an angle, and is usually measured in degrees . The equator has a latitude of 0°, the North pole has a latitude of 90° north , and the South pole has a...
, setting the record for human exploration farthest North
Farthest North
Farthest North describes the most northerly latitude reached by explorers before the conquest of the North Pole rendered the expression obsolete...
that stood for nearly five decades before being surpassed at 83°20′26″ by Albert Hastings Markham
Albert Hastings Markham
Admiral Sir Albert Hastings Markham, KCB was a British explorer, author, and officer in the Royal Navy. In 1903 he was made Knight Commander in the Order of the Bath...
in 1875–1876.

Parry was born in Bath, the son of Dr. Caleb Hillier Parry and Sarah Rigby. He was educated at King Edward's School, Bath
King Edward's School, Bath
King Edward's School , Bath, Somerset, England is an independent school providing education for 950 pupils aged 3 to 18.The school is a member of The Headmasters' and Headmistresses' Conference....
. At the age of thirteen he joined the flagship of Admiral Cornwallis in the Channel fleet as a first-class volunteer, in 1806 became a midshipman, and in 1810 received promotion to the rank of lieutenant in the frigate Alexander, which spent the next three years in the protection of the Spitsbergen
Svalbard
Svalbard is an archipelago in the Arctic, constituting the northernmost part of Norway. It is located north of mainland Europe, midway between mainland Norway and the North Pole. The group of islands range from 74° to 81° north latitude , and from 10° to 35° east longitude. Spitsbergen is the...
whale fishery. He took advantage of this opportunity for the study and practice of astronomical
Astronomy
Astronomy is a natural science that deals with the study of celestial objects and phenomena that originate outside the atmosphere of Earth...
observations in northern latitudes, and afterwards published the results of his studies in a small volume on Nautical Astronomy by Night (1816). From 1813–1817 he served on the North American station.

In 1818 he received command of the brig Alexander in the Arctic expedition under Captain (afterwards Sir) John Ross
John Ross (Arctic explorer)
Sir John Ross, CB, was a Scottish rear admiral and Arctic explorer.Ross was the son of the Rev. Andrew Ross, minister of Inch, near Stranraer in Scotland. In 1786, aged only nine, he joined the Royal Navy as an apprentice. He served in the Mediterranean until 1789 and then in the English Channel...
. This expedition returned to England without having made any new discoveries but Parry, confident, as he expressed it, "that attempts at Polar discovery had been hitherto relinquished just at a time when there was the greatest chance of succeeding", in the following year obtained the chief command of a new Arctic expedition; consisting of the two ships HMS Griper and HMS Hecla
HMS Hecla (1815)
HMS Hecla was a Royal Navy Hecla-class bomb vessel of 372 tons. Launched on 15 July 1815, she saw wartime service in an attack on Barbary pirates at Algiers in August, 1816...
.

This expedition returned to England in November, 1820 after a voyage of almost unprecedented Arctic success, having accomplished more than half the journey from Greenland
Greenland
Greenland is an autonomous country within the Kingdom of Denmark, located between the Arctic and Atlantic Oceans, east of the Canadian Arctic Archipelago. Though physiographically a part of the continent of North America, Greenland has been politically and culturally associated with Europe for...
to Bering Strait
Bering Strait
The Bering Strait , known to natives as Imakpik, is a sea strait between Cape Dezhnev, Chukotka Autonomous Okrug, Russia, the easternmost point of the Asian continent and Cape Prince of Wales, Alaska, USA, the westernmost point of the North American continent, with latitude of about 65°40'N,...
, the completion of which solved the ancient problem of a Northwest Passage
Northwest Passage
The Northwest Passage is a sea route through the Arctic Ocean, along the northern coast of North America via waterways amidst the Canadian Arctic Archipelago, connecting the Atlantic and Pacific Oceans...
. A narrative of the expedition, entitled Journal of a Voyage to discover a North-west Passage, appeared in 1821.

With the same ships Parry undertook a third expedition on the same quest in 1824, but again unsuccessfully, and following the wreck of the Fury, he returned home in October 1825 with a double ship's company. He published an account of this voyage in 1826.

He was elected a Fellow of the Royal Society in February 1821.

In the following year Parry obtained the sanction of the Admiralty
Admiralty
The Admiralty was formerly the authority in the Kingdom of England, and later in the United Kingdom, responsible for the command of the Royal Navy...
for an attempt on the North Pole
North Pole
The North Pole, also known as the Geographic North Pole or Terrestrial North Pole, is, subject to the caveats explained below, defined as the point in the northern hemisphere where the Earth's axis of rotation meets its surface...
from the northern shores of Spitsbergen
Spitsbergen
Spitsbergen is the largest and only permanently populated island of the Svalbard archipelago in Norway. Constituting the western-most bulk of the archipelago, it borders the Arctic Ocean, the Norwegian Sea and the Greenland Sea...
at Seven Islands
Sjuøyane
Sjuøyane is the northernmost part of the Svalbard archipelago, just north of Nordaustlandet. As the name implies, this is a group of seven islands , although three are mere islets. The principal islands are Phippsøya, Parryøya, Martensøya, Nelsonøya and Waldenøya, the islets are Tavleøya, Vesle...
. On 23 October 1826 Parry married Isabella Louisa Stanley, daughter of John Stanley, 1st Baron Stanley of Alderley
John Stanley, 1st Baron Stanley of Alderley
John Thomas Stanley, 1st Baron Stanley of Alderley , known as Sir John Stanley, 7th Baronet, from 1807 to 1839, was a British peer and politician....
and Lady Maria Josepha Holroyde before undertaking the expedition.

In 1827 he reached 82°45’N, which remained for 49 years the highest latitude attained. He published an account of this journey under the title of Narrative of the Attempt to reach the North Pole, &c. (1827).

Parry was subsequently selected for the post of comptroller of the newly-created department of steam machinery of the Navy, and held this office until his retirement from active service in 1846, when he was appointed captain-superintendent of Haslar Hospital. He reorganised the Packet Service (overseas mail), which had been transferred from the Post Office to the Admiralty in January 1837. Steamship companies were contracted to carry the mail, instead of naval vessels, on a regular schedule .

He attained the rank of rear-admiral in 1852, and in the following year became a governor of Greenwich Hospital, and retained this post until his death.

Sir William Parry’s character was influenced by his unwavering belief in Jesus Christ, and besides the journals of his different voyages he also wrote a Lecture to Seamen, and Thoughts on the Parental Character of God. He was noted as "an evangelical [Christian] and an ardent advocate of moral reform in the navy."

Parry also pioneered the use of canning
Canning
Canning is a method of preserving food in which the food contents are processed and sealed in an airtight container. Canning provides a typical shelf life ranging from one to five years, although under specific circumstances a freeze-dried canned product, such as canned, dried lentils, can last as...
techniques for food preservation
Food preservation
Food preservation is the process of treating and handling food to stop or slow down spoilage and thus allow for longer storage....
on his Arctic voyages. However, his techniques were not infallible: in 1939 viable spores of certain heat-resistant bacteria were found in canned roast veal that had travelled with Parry to the Arctic Circle in 1824.

The crater Parry
Parry (crater)
Parry is a lunar crater that is attached to the southeast rim of the walled plain Fra Mauro. Attached to the west and southwest rim of Parry is the crater Bonpland. Due south of Parry is the small crater Tolansky, and farther to the south-southwest is Guericke....
on the Moon
Moon
The Moon is Earth's only known natural satellite,There are a number of near-Earth asteroids including 3753 Cruithne that are co-orbital with Earth: their orbits bring them close to Earth for periods of time but then alter in the long term . These are quasi-satellites and not true moons. For more...
was named after him, as was Parry County, New South Wales
Parry County, New South Wales
Parry County is one of the 141 Cadastral divisions of New South Wales. It is bounded by the Peel River and Cockburn River on the north, near Tamworth. The Moonbi Range is on the eastern boundary, and the Peel Range on the western boundary. The Great Dividing Range is the boundary to the south-east...
, Parry Sound
Parry Sound, Ontario
Parry Sound is a town in Central Ontario, Canada, located on Parry Sound on the eastern shore of Georgian Bay. Parry Sound is located south of Sudbury and north of Toronto. It is the seat of Parry Sound District, a popular cottage country region for Southern Ontario residents. It is also the...
, Ontario, Canada, and the optical phenomenon Parry arc
Parry arc
A Parry arc is a rare halo, an optical phenomenon which occasionally appears over a 22° halo together with an upper tangent arc.- Discovery :...
, documented by him during the 1819–1821 expedition.