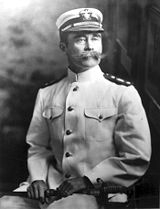 Overview
Robert Edwin Peary, Sr. (May 6, 1856 – February 20, 1920) was an American
United States
The United States of America is a federal constitutional republic comprising fifty states and a federal district...
explorer who claimed to have been the first person, on April 6, 1909, to reach the geographic North Pole. Peary's claim was widely credited for most of the 20th century, though it was criticized even in its own day and is today widely doubted.
Robert Edwin Peary was born in Cresson, Pennsylvania
Cresson, Pennsylvania
Cresson is a borough in Cambria County, Pennsylvania, east of Pittsburgh. Cresson is an elevated place known for its beauty. Mineral springs add to its attractions. It is above 2,000 feet in elevation. Lumber, coal, and coke yards were industries that had supported the population which numbered...
, in 1856. Peary graduated from Bowdoin College
Bowdoin College
Bowdoin College , founded in 1794, is an elite private liberal arts college located in the coastal Maine town of Brunswick, Maine. As of 2011, U.S. News and World Report ranks Bowdoin 6th among liberal arts colleges in the United States. At times, it was ranked as high as 4th in the country. It is...
, Phi Beta Kappa, in 1877.

What did he travel in?

What did he travel in?
More
x