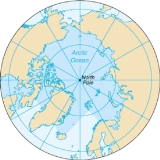 Overview
The North Pole, also known as the Geographic North Pole or Terrestrial North Pole, is, subject to the caveats explained below, defined as the point in the northern hemisphere
Northern Hemisphere
The Northern Hemisphere is the half of a planet that is north of its equator—the word hemisphere literally means “half sphere”. It is also that half of the celestial sphere north of the celestial equator...
where the Earth
Earth
Earth is the third planet from the Sun, and the densest and fifth-largest of the eight planets in the Solar System. It is also the largest of the Solar System's four terrestrial planets...
's axis of rotation meets its surface. It should not be confused with the North Magnetic Pole
North Magnetic Pole
The Earth's North Magnetic Pole is the point on the surface of the Northern Hemisphere at which the Earth's magnetic field points vertically downwards . Though geographically in the north, it is, by the direction of the magnetic field lines, physically the south pole of the Earth's magnetic field...
.

The North Pole is the northernmost point on Earth, lying diametrically opposite the South Pole
South Pole
The South Pole, also known as the Geographic South Pole or Terrestrial South Pole, is one of the two points where the Earth's axis of rotation intersects its surface. It is the southernmost point on the surface of the Earth and lies on the opposite side of the Earth from the North Pole...
. It defines geodetic latitude 90° North, as well as the direction of True North
True north
True north is the direction along the earth's surface towards the geographic North Pole.True geodetic north usually differs from magnetic north , and from grid north...
.

How fast does it take for hot water to freeze when tossed in in the air in north pole? i watched a national geographic documentary of north pole..ther...