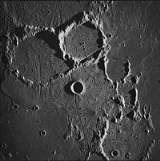 Encyclopedia
Parry is a lunar
Moon
The Moon is Earth's only known natural satellite,There are a number of near-Earth asteroids including 3753 Cruithne that are co-orbital with Earth: their orbits bring them close to Earth for periods of time but then alter in the long term . These are quasi-satellites and not true moons. For more...
crater
Impact crater
In the broadest sense, the term impact crater can be applied to any depression, natural or manmade, resulting from the high velocity impact of a projectile with a larger body...
that is attached to the southeast rim of the walled plain Fra Mauro
Fra Mauro (crater)
Fra Mauro is the worn remnant of a walled lunar plain. It is part of the surrounding Fra Mauro formation, being located to the northeast of Mare Cognitum and southeast of Mare Insularum...
. Attached to the west and southwest rim of Parry is the crater Bonpland
Bonpland (crater)
Bonpland is the remains of a lunar crater that is attached to the walled plain Fra Mauro to the north and Parry to the east. The intersection of their rims forms a three-pointed mountainous rise. To the southeast is the small crater Tolansky...
. Due south of Parry is the small crater Tolansky
Tolansky (crater)
Tolansky is a small, circular lunar impact crater that is located due south of the crater Parry on the Mare Cognitum. The formation is symmetric, with a light-hued outer rim and a darker interior floor. A rille belonging to the Rimae Parry almost connects with the north-northwestern rim of Tolansky....
, and farther to the south-southwest is Guericke
Guericke (crater)
Guericke is the remnant of a lunar crater at the north part of the Mare Nubium. To the north-northwest lies the large Fra Mauro formation, along with the co-joined craters Parry and Bonpland. To the east are the craters Kundt and Davy....
.

The rim of Parry is heavily worn and slightly distorted due to the co-joined formations. The wall is the most prominent along the northwest, and crossed along the southwest by the small Parry B. The floor has been flooded by lava
Lava
Lava refers both to molten rock expelled by a volcano during an eruption and the resulting rock after solidification and cooling. This molten rock is formed in the interior of some planets, including Earth, and some of their satellites. When first erupted from a volcanic vent, lava is a liquid at...
, and is relatively flat. At the mid-point is a pair of tiny craterlets. A rille
Rille
Rille is typically used to describe any of the long, narrow depressions in the lunar surface that resemble channels. Typically a rille can be up to several kilometers wide and hundreds of kilometers in length...
system crosses the southeast rim in a northeast direction before crossing the east rim and continuing a short distance across the surrounding mare
Lunar mare
The lunar maria are large, dark, basaltic plains on Earth's Moon, formed by ancient volcanic eruptions. They were dubbed maria, Latin for "seas", by early astronomers who mistook them for actual seas. They are less reflective than the "highlands" as a result of their iron-rich compositions, and...
.

By convention these features are identified on lunar maps by placing the letter on the side of the crater mid-point that is closest to Parry.