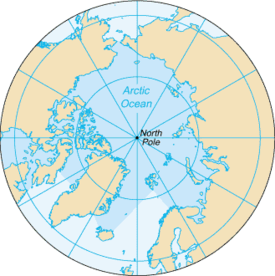 Farthest North describes the most northerly latitude reached by explorers before the conquest of the North Pole
North Pole
The North Pole, also known as the Geographic North Pole or Terrestrial North Pole, is, subject to the caveats explained below, defined as the point in the northern hemisphere where the Earth's axis of rotation meets its surface...
rendered the expression obsolete. The northern (Arctic
Arctic
The Arctic is a region located at the northern-most part of the Earth. The Arctic consists of the Arctic Ocean and parts of Canada, Russia, Greenland, the United States, Norway, Sweden, Finland, and Iceland. The Arctic region consists of a vast, ice-covered ocean, surrounded by treeless permafrost...
) polar regions are much more accessible than those of the south
Antarctic
The Antarctic is the region around the Earth's South Pole, opposite the Arctic region around the North Pole. The Antarctic comprises the continent of Antarctica and the ice shelves, waters and island territories in the Southern Ocean situated south of the Antarctic Convergence...
, as continental land masses extend to high latitudes and sea voyages to the regions are relatively short.

A Dutch expedition led by Willem Barentz reached 79°49’ N on 16 June 1596 to register the first recorded Farthest North. In 1607 Henry Hudson
Henry Hudson
Henry Hudson was an English sea explorer and navigator in the early 17th century. Hudson made two attempts on behalf of English merchants to find a prospective Northeast Passage to Cathay via a route above the Arctic Circle...
probably reached Hakluyt's Headland (a little south of the latitude reached by Barentsz), but could not proceed further as ice lay packed along Spitsbergen
Spitsbergen
Spitsbergen is the largest and only permanently populated island of the Svalbard archipelago in Norway. Constituting the western-most bulk of the archipelago, it borders the Arctic Ocean, the Norwegian Sea and the Greenland Sea...
's north coast. In 1612 an explorer from Hull, Thomas Marmaduke
Thomas Marmaduke
Thomas Marmaduke was an English explorer, sealer, and whaler in the early 17th century.-Career:In a list dated from September 1600 Marmaduke is mentioned as being a younger brother of the Hull Trinity House. He was master of one of the two Hull interlopers sent to Bjørnøya in 1609...
, claimed to have reached 82°N, while Dutch explorers in 1614 and 1624 claimed to have sailed even further north to 83°N. None of these claims have any basis in fact, with the second claim, made by Joris Carolus
Joris Carolus
Joris Carolus was a Dutch cartographer and explorer. He served for both the Noordsche Compagnie and the Vereenigde Oost-Indische Compagnie .-Career:...
, impossible knowing ice conditions that season; although Marmaduke did at least reach Gråhuken (at 79° 48' N). English
England
England is a country that is part of the United Kingdom. It shares land borders with Scotland to the north and Wales to the west; the Irish Sea is to the north west, the Celtic Sea to the south west, with the North Sea to the east and the English Channel to the south separating it from continental...
whalers reached Svalbard
Svalbard
Svalbard is an archipelago in the Arctic, constituting the northernmost part of Norway. It is located north of mainland Europe, midway between mainland Norway and the North Pole. The group of islands range from 74° to 81° north latitude , and from 10° to 35° east longitude. Spitsbergen is the...
's Nordkapp (at 80°32' N) in or before 1622, as shown on the Muscovy Company's Map (1625). The Seven Islands
Sjuøyane
Sjuøyane is the northernmost part of the Svalbard archipelago, just north of Nordaustlandet. As the name implies, this is a group of seven islands , although three are mere islets. The principal islands are Phippsøya, Parryøya, Martensøya, Nelsonøya and Waldenøya, the islets are Tavleøya, Vesle...
(at 80° 49' N), north of Nordaustlandet
Nordaustlandet
Nordaustlandet is the second-largest island in the archipelago of Svalbard, Norway, with an area of . It lies north east of Spitsbergen, separated by Hinlopenstretet. Much of Nordaustlandet lies under large ice caps, mainly Austfonna and Vestfonna, the remaining parts of the north being tundra...
, were first marked on a Dutch map of 1663, but were allegedly reached by a ship of Enkhuizen
Enkhuizen
Enkhuizen is a municipality and a town in the Netherlands, in the province of North Holland and the region of West-Frisia.Enkhuizen was one of the harbour-towns of the VOC, just like Hoorn and Amsterdam, from where overseas trade with the East Indies was conducted. It received city rights in 1355...
as early as 1618. In 1707 the Dutch whaler Cornelis Cornelisz Giles (or Gieles) rounded the northernmost point of Nordaustlandet in Svalbard, passing 81°N. In 1806 the Resolution of Whibty, under William Scoresby, Sr., was said to have sailed north of the Seven Islands and reached 81° 50' N.

One of the first expeditions with the explicit purpose of reaching the North Pole was that of William Edward Parry
William Edward Parry
Sir William Edward Parry was an English rear-admiral and Arctic explorer, who in 1827 attempted one of the earliest expeditions to the North Pole...
in 1827, who reached 82°45’ N, a record that stood for decades. Albert Hastings Markham
Albert Hastings Markham
Admiral Sir Albert Hastings Markham, KCB was a British explorer, author, and officer in the Royal Navy. In 1903 he was made Knight Commander in the Order of the Bath...
, a member of the British Arctic Expedition
British Arctic Expedition
The British Arctic Expedition of 1875-1876, led by Sir George Strong Nares, was sent by the British Admiralty to attempt to reach the North Pole via Smith Sound. Two ships, HMS Alert and HMS Discovery , sailed from Portsmouth on 29 May 1875...
of 1875-76 was the next one to get closer to the pole 48 years later, when he reached a latitude of 83° 20′ 26″ N by a dog sledge. Adolphus Greely
Adolphus Greely
Adolphus Washington Greely , was an American Polar explorer, a United States Army officer and a recipient of the Medal of Honor.-Early military career:...
's Lady Franklin Bay Expedition
Lady Franklin Bay Expedition
The 1881-1884 Lady Franklin Bay Expedition into the Canadian Arctic was led by Lt. Adolphus Greely and was promoted by the United States Army Signal Corps. Its purpose was threefold: to establish a meteorological-observation station as part of the First International Polar Year, to collect...
bested Markham by a few miles, reaching 83°24′ in 1882.

In 1895, Norwegians Fridtjof Nansen
Fridtjof Nansen
Fridtjof Wedel-Jarlsberg Nansen was a Norwegian explorer, scientist, diplomat, humanitarian and Nobel Peace Prize laureate. In his youth a champion skier and ice skater, he led the team that made the first crossing of the Greenland interior in 1888, and won international fame after reaching a...
and Fredrik Hjalmar Johansen reached latitude 86°14' N. In 1900, Umberto Cagni
Umberto Cagni
Umberto Cagni was a polar explorer and an admiral in the Royal Italian Navy. He is best known for his leadership in a probe, by dogsled, northward over the surface of the Arctic Ocean in 1900...
of the Italian Royal Navy left the base camp established by Luigi Amedeo, Duke of the Abruzzi
Luigi Amedeo, Duke of the Abruzzi
Prince Luigi Amedeo Giuseppe Maria Ferdinando Francesco di Savoia-Aosta , Duke of the Abruzzi , was an Italian nobleman, mountaineer and explorer of the royal House of Savoy...
and reached latitude 86° 34’ on April 25, beating Nansen's 1895 mark by 35 to 40 kilometres.

Two American explorers claimed to reach the North Pole in 1908 (Frederick Cook
Frederick Cook
Frederick Albert Cook was an American explorer and physician, noted for his claim of having reached the North Pole on April 21, 1908. This would have been a year before April 6, 1909, the date claimed by Robert Peary....
) and 1909 (Robert Peary
Robert Peary
Robert Edwin Peary, Sr. was an American explorer who claimed to have been the first person, on April 6, 1909, to reach the geographic North Pole...
). Cook's claim was soon judged to be fraudulent, and Peary was credited as the discoverer of the North Pole for much of the 20th century. In recent decades, however, Peary's claim has become the subject of controversy, though he did set a new record for Farthest North (his support party was dismissed at 87° 45’ N latitude). With Peary's claim accepted at the time, overland expeditions to the North Pole came to an end. Roald Amundsen
Roald Amundsen
Roald Engelbregt Gravning Amundsen was a Norwegian explorer of polar regions. He led the first Antarctic expedition to reach the South Pole between 1910 and 1912 and he was the first person to reach both the North and South Poles. He is also known as the first to traverse the Northwest Passage....
of Norway redirected his planned Arctic expedition and instead aimed for the South Pole, which he achieved
Amundsen's South Pole expedition
The first expedition to reach the geographic South Pole was led by the Norwegian explorer Roald Amundsen. He and four others arrived at the pole on 14 December 1911, five weeks ahead of a British party led by Robert Falcon Scott...
in 1911.

On 9 May 1926, Richard Evelyn Byrd
Richard Evelyn Byrd
Rear Admiral Richard Evelyn Byrd, Jr., USN was a naval officer who specialized in feats of exploration. He was a pioneering American aviator, polar explorer, and organizer of polar logistics...
attempted to fly over the North Pole in an airplane. He was widely credited with achieving this, but his claim subsequently became subject to doubt. Finally, on 12 May 1926, the airship
Airship
An airship or dirigible is a type of aerostat or "lighter-than-air aircraft" that can be steered and propelled through the air using rudders and propellers or other thrust mechanisms...
Norge
Norge (airship)
The Norge was a semi-rigid Italian-built airship that carried out what many consider the first verified overflight of the North Pole on May 12, 1926. It was also the first aircraft to fly over the polar ice cap between Europe and America...
carried Roald Amundsen
Roald Amundsen
Roald Engelbregt Gravning Amundsen was a Norwegian explorer of polar regions. He led the first Antarctic expedition to reach the South Pole between 1910 and 1912 and he was the first person to reach both the North and South Poles. He is also known as the first to traverse the Northwest Passage....
and fifteen other men (including the craft's designer and pilot Umberto Nobile
Umberto Nobile
Umberto Nobile was an Italian aeronautical engineer and Arctic explorer. Nobile was a developer and promoter of semi-rigid airships during the Golden Age of Aviation between the two World Wars...
, helmsman Oscar Wisting
Oscar Wisting
Oscar Adolf Wisting was a Norwegian polar explorer. Together with Roald Amundsen he was the first person to reach both the North and South Poles.- Biography :...
, navigator Hjalmar Riiser-Larsen
Hjalmar Riiser-Larsen
Hjalmar Riiser-Larsen was a Norwegian aviation pioneer, polar explorer and businessman. Among his achievements, he is generally regarded as the founder of the Royal Norwegian Air Force....
, and the expedition's sponsor Lincoln Ellsworth
Lincoln Ellsworth
Lincoln Ellsworth was an arctic explorer from the United States.-Birth:He was born on May 12, 1880 to James Ellsworth and Eva Frances Butler in Chicago, Illinois...
) over the North Pole, en route from Spitsbergen
Spitsbergen
Spitsbergen is the largest and only permanently populated island of the Svalbard archipelago in Norway. Constituting the western-most bulk of the archipelago, it borders the Arctic Ocean, the Norwegian Sea and the Greenland Sea...
to Alaska
Alaska
Alaska is the largest state in the United States by area. It is situated in the northwest extremity of the North American continent, with Canada to the east, the Arctic Ocean to the north, and the Pacific Ocean to the west and south, with Russia further west across the Bering Strait...
, the first achievement of the Pole about which there is no controversy. The first man definitely to set foot on the Pole was the Russian Alexander Kuznetsov, who landed an aircraft there in 1948. In 1968–69 the British explorer Wally Herbert
Wally Herbert
Sir Walter William "Wally" Herbert was a British polar explorer, writer and artist. In 1969 he became the first man to walk undisputed to the North Pole, on the 60th anniversary of Robert Peary's famous, but disputed, expedition...
became the first person indubitably to reach the Pole on foot, having sledged from Alaska. His expedition was supported by air drops.
The source of this article is wikipedia, the free encyclopedia.  The text of this article is licensed under the GFDL.