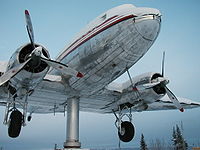 A weather vane is an instrument for showing the direction of the wind. They are typically used as an architectural ornament to the highest point of a building.

Although partly functional, weather vanes are generally decorative, often featuring the traditional cockerel
Chicken
The chicken is a domesticated fowl, a subspecies of the Red Junglefowl. As one of the most common and widespread domestic animals, and with a population of more than 24 billion in 2003, there are more chickens in the world than any other species of bird...
design with letters indicating the points of the compass
Compass
A compass is a navigational instrument that shows directions in a frame of reference that is stationary relative to the surface of the earth. The frame of reference defines the four cardinal directions – north, south, east, and west. Intermediate directions are also defined...
. Other common motifs include ships, arrows and horses. Not all weather vanes have pointers.

The design of a wind vane is such that the weight is evenly distributed on each side of the surface, but the surface area is unequally divided, so that the pointer can move freely on its axis. The side with the larger surface area is blown away from the wind direction, so that the smaller side, with the pointer, is pivoted to face the wind direction. Most wind vanes have directional markers beneath the arrow, aligned with the geographic directions.

Wind vanes, especially those with fanciful shapes, do not always show the real direction of a very gentle wind. This is because the figures do not achieve the necessary design balance: an unequal surface area but balanced in weight.

To obtain an accurate reading, the wind vane must be located well above the ground and away from buildings, trees, and other objects which interfere with the true wind direction. Changing wind direction can be meaningful when coordinated with other apparent sky conditions, enabling the user to make simple short range forecasts.
From the street level the size of many weathercocks is deceptive.

The Tower of the Winds
Tower of the Winds
The Tower of the Winds, also called horologion , is an octagonal Pentelic marble clocktower on the Roman agora in Athens. The structure features a combination of sundials, a water clock and a wind vane...
on the ancient Roman
Ancient Rome
Ancient Rome was a thriving civilization that grew on the Italian Peninsula as early as the 8th century BC. Located along the Mediterranean Sea and centered on the city of Rome, it expanded to one of the largest empires in the ancient world....
agora
Agora
The Agora was an open "place of assembly" in ancient Greek city-states. Early in Greek history , free-born male land-owners who were citizens would gather in the Agora for military duty or to hear statements of the ruling king or council. Later, the Agora also served as a marketplace where...
in Athens
Athens
Athens , is the capital and largest city of Greece. Athens dominates the Attica region and is one of the world's oldest cities, as its recorded history spans around 3,400 years. Classical Athens was a powerful city-state...
once bore on its roof a wind vane in the form of a bronze Triton
Triton (mythology)
Triton is a mythological Greek god, the messenger of the big sea. He is the son of Poseidon, god of the sea, and Amphitrite, goddess of the sea, whose herald he is...
holding a rod in his outstretched hand, rotating as the wind changed direction. Below, the frieze
Frieze
thumb|267px|Frieze of the [[Tower of the Winds]], AthensIn architecture the frieze is the wide central section part of an entablature and may be plain in the Ionic or Doric order, or decorated with bas-reliefs. Even when neither columns nor pilasters are expressed, on an astylar wall it lies upon...
was adorned with the eight wind deities. The eight metre high structure also featured sundial
Sundial
A sundial is a device that measures time by the position of the Sun. In common designs such as the horizontal sundial, the sun casts a shadow from its style onto a surface marked with lines indicating the hours of the day. The style is the time-telling edge of the gnomon, often a thin rod or a...
s, and a water clock
Water clock
A water clock or clepsydra is any timepiece in which time is measured by the regulated flow of liquid into or out from a vessel where the amount is then measured.Water clocks, along with sundials, are likely to be the oldest time-measuring instruments, with the only exceptions...
inside dates from around 50 BC.

In the 9th century the Pope issued an edict that all churches must show the symbol of a cock on its dome or steeple, as a symbol of Jesus
Jesus
Jesus of Nazareth , commonly referred to as Jesus Christ or simply as Jesus or Christ, is the central figure of Christianity...
' prophecy of Peter's betrayal (Luke 22:34), that Peter would deny him three times before the rooster crowed on the morning following the Last Supper
Last Supper
The Last Supper is the final meal that, according to Christian belief, Jesus shared with his Twelve Apostles in Jerusalem before his crucifixion. The Last Supper provides the scriptural basis for the Eucharist, also known as "communion" or "the Lord's Supper".The First Epistle to the Corinthians is...
. Many churches started using this symbol on its weathervanes.

The Bayeux Tapestry
Bayeux Tapestry
The Bayeux Tapestry is an embroidered cloth—not an actual tapestry—nearly long, which depicts the events leading up to the Norman conquest of England concerning William, Duke of Normandy and Harold, Earl of Wessex, later King of England, and culminating in the Battle of Hastings...
of 1070s depicts a scene, with a man installing a weather vane with a cock on Westminster Abbey
Westminster Abbey
The Collegiate Church of St Peter at Westminster, popularly known as Westminster Abbey, is a large, mainly Gothic church, in the City of Westminster, London, United Kingdom, located just to the west of the Palace of Westminster. It is the traditional place of coronation and burial site for English,...
, while the dead King Edward is carried inside.

Early weather vanes had very ornamental pointers, but modern wind vanes are usually simple arrows that dispense with the directionals because the instrument is connected to a remote reading station. An early example of this was installed in the Royal Navy's Admiralty
Admiralty
The Admiralty was formerly the authority in the Kingdom of England, and later in the United Kingdom, responsible for the command of the Royal Navy...
building in London - the vane on the roof was mechanically linked to a large dial in the boardroom so senior officers were always aware of the wind direction when they met.

Modern aerovanes combine the directional vane with an anemometer
Anemometer
An anemometer is a device for measuring wind speed, and is a common weather station instrument. The term is derived from the Greek word anemos, meaning wind, and is used to describe any airspeed measurement instrument used in meteorology or aerodynamics...
(a device for measuring wind speed). Co-locating both instruments allows them to use the same axis (a vertical rod) and provides a coordinated readout.

Another wind direction device is the windsock
Windsock
A windsock is a conical textile tube designed to indicate wind direction and relative wind speed. Windsocks typically are used at airports and at chemical plants where there is risk of gaseous leakage...
used at airports to show wind direction and strength. The wind fills the sock and makes it blow away from the prevailing wind. Strong winds make the sock point almost horizontally, while light airs allow the sock to hang limply. Because of its size, the windsock can often be seen from the air as well as the ground. Even the most technologically-advanced airports still use windsocks.

According to the Guinness World Records
Guinness World Records
Guinness World Records, known until 2000 as The Guinness Book of Records , is a reference book published annually, containing a collection of world records, both human achievements and the extremes of the natural world...
, the world's largest weather vane is a Tío Pepe
Tio Pepe
Tío Pepe is a brand of Sherry, the best selling brand in the world. It is best known for its fino style of dry sherry made from the palomino grape...
sherry
Sherry
Sherry is a fortified wine made from white grapes that are grown near the town of Jerez , Spain. In Spanish, it is called vino de Jerez....
advertisement located in Jerez
Jerez de la Frontera
Jerez de la Frontera is a municipality in the province of Cádiz in the autonomous community of Andalusia, in southwestern Spain, situated midway between the sea and the mountains. , the city, the largest in the province, had 208,896 inhabitants; it is the fifth largest in Andalusia...
, Spain
Spain
Spain , officially the Kingdom of Spain languages]] under the European Charter for Regional or Minority Languages. In each of these, Spain's official name is as follows:;;;;;;), is a country and member state of the European Union located in southwestern Europe on the Iberian Peninsula...
. The city of Montague, Michigan
Montague, Michigan
Montague is a city in Muskegon County in the U.S. state of Michigan. As of the 2000 census, the city had a total population of 2,407. The city is located within Montague Township, but is politically independent....
also claims to have the largest standard-design weather vane, being a ship and arrow which measures 48 feet tall, with an arrow 26 feet long.

A challenger for the title of world's largest weather vane is located in Whitehorse, Yukon
Whitehorse, Yukon
Whitehorse is Yukon's capital and largest city . It was incorporated in 1950 and is located at kilometre 1476 on the Alaska Highway in southern Yukon. Whitehorse's downtown and Riverdale areas occupy both shores of the Yukon River, which originates in British Columbia and meets the Bering Sea in...
. The weather vane is a retired Douglas DC-3
Douglas DC-3
The Douglas DC-3 is an American fixed-wing propeller-driven aircraft whose speed and range revolutionized air transport in the 1930s and 1940s. Its lasting impact on the airline industry and World War II makes it one of the most significant transport aircraft ever made...
CF-CPY atop a swiveling support. Located at the Yukon Transportation Museum http://www.goytm.ca beside Whitehorse International Airport
Whitehorse International Airport
Erik Nielsen Whitehorse International Airport is located in Whitehorse, Yukon, Canada. It is part of the National Airports System, and is operated by the government of the Yukon Territory...
, the weather vane is used by pilots to determine wind direction, used as a landmark by tourists and enjoyed by locals. The weather vane only requires a 5 knot wind to rotate.