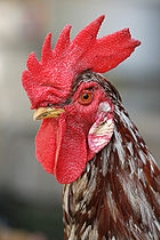 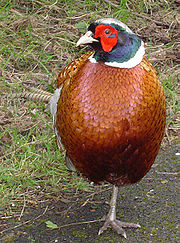 A wattle is a fleshy dewlap
Dewlap
A dewlap is a longitudinal flap of skin that hangs beneath the lower jaw or neck of many vertebrates. While the term is usually used in this specific context, it can also be used to include other structures occurring in the same body area with a similar aspect, such as those caused by a double...
or caruncle
Caruncle
Caruncle may refer to:*In botany, an elaiosome , especially in the plant family Euphorbiaceae*In animal anatomy:**prostomium, the sensory organ of Annelid worms...
hanging from various parts of the head or neck in several groups of birds, goats and other animals. In some birds the caruncle is erectile tissue
Erectile tissue
Erectile tissue is tissue in the body that can become erect, usually by becoming engorged with blood.-Erectile tissue in the clitoris and penis:...
.

In birds the wattle is often an ornament for courting potential mates
Sexual selection
Sexual selection, a concept introduced by Charles Darwin in his 1859 book On the Origin of Species, is a significant element of his theory of natural selection...
. A large wattle is correlated with high testosterone levels, good nutrition, and the ability to evade predators, which in turn suggests a successful mate. It has also been proposed that ornamental organs such as the wattle are also associated with genes
Gene
A gene is a molecular unit of heredity of a living organism. It is a name given to some stretches of DNA and RNA that code for a type of protein or for an RNA chain that has a function in the organism. Living beings depend on genes, as they specify all proteins and functional RNA chains...
coding for disease resistance.

Bird
Bird
Birds are feathered, winged, bipedal, endothermic , egg-laying, vertebrate animals. Around 10,000 living species and 188 families makes them the most speciose class of tetrapod vertebrates. They inhabit ecosystems across the globe, from the Arctic to the Antarctic. Extant birds range in size from...
s with wattles include:

Mammal
Mammal
Mammals are members of a class of air-breathing vertebrate animals characterised by the possession of endothermy, hair, three middle ear bones, and mammary glands functional in mothers with young...
s with wattles include:
The source of this article is wikipedia, the free encyclopedia.  The text of this article is licensed under the GFDL.