Like many incorporated towns in Virginia, the town of Warrenton has government and taxation separate from the county. The town and the county do share some services, such as schools and the county landfill. 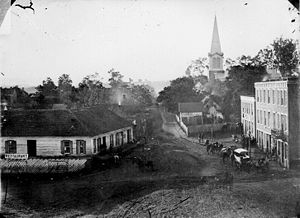 The settlement which would grow into the Town of Warrenton began as a cross roads at the junction of the Falmouth-Winchester and Alexandria-Culpeper roads., where a trading post called the Red Store was located. In the 1790s, a courthouse was built in the area, and the location was known as Fauquier Courthouse.

Colonel
Colonel
Colonel , abbreviated Col or COL, is a military rank of a senior commissioned officer. It or a corresponding rank exists in most armies and in many air forces; the naval equivalent rank is generally "Captain". It is also used in some police forces and other paramilitary rank structures...
John S. Mosby
John S. Mosby
John Singleton Mosby , nicknamed the "Gray Ghost", was a Confederate cavalry battalion commander in the American Civil War...
made raids in the town during the Civil War
American Civil War
The American Civil War was a civil war fought in the United States of America. In response to the election of Abraham Lincoln as President of the United States, 11 southern slave states declared their secession from the United States and formed the Confederate States of America ; the other 25...
and later made his home and practiced law in Warrenton. The Warren Green Hotel building hosted many famous people including Marquis de Lafayette, James Monroe, Andrew Jackson, Henry Clay, President Theodore Roosevelt, and divorcée Wallis Simpson. General McClellan bade farewell to his officers November 11, 1862 from the steps of the Hotel. It now hosts some offices of the Fauquier County Government.

Arthur Jordan, an African-American man, was lynched by a mob of approximately 50 white men in the early hours of January 19, 1880. Jordan had been accused of miscegenation
Miscegenation
Miscegenation is the mixing of different racial groups through marriage, cohabitation, sexual relations, and procreation....
and bigamy
Bigamy
In cultures that practice marital monogamy, bigamy is the act of entering into a marriage with one person while still legally married to another. Bigamy is a crime in most western countries, and when it occurs in this context often neither the first nor second spouse is aware of the other...
for eloping with the daughter of his white employer. A group of local men hunted the pair down in Maryland, returned them, and delivered Mr. Jordan to the town jail. During the night, the lynch mob gained access to the jail and dragged Jordan the nearby town cemetery, where he was hanged from a small locust tree.

In 1909, a fire destroyed almost half the structures in the town, and was halted with the use of dynamite to create a firebreak to stop the flames from spreading. .

A bypass route around the Town was built in the early 1960s, which attracted restaurants, gas stations, and shopping centers, but also drew businesses away from the center of Town.


Notable residents, past and present 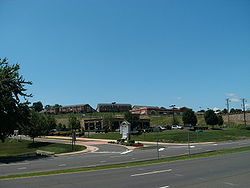 As of the census
Census
A census is the procedure of systematically acquiring and recording information about the members of a given population. It is a regularly occurring and official count of a particular population. The term is used mostly in connection with national population and housing censuses; other common...
of 2000, there were 6,670 people, 2,683 households, and 1,591 families residing in the town. The population density
Population density
Population density is a measurement of population per unit area or unit volume. It is frequently applied to living organisms, and particularly to humans...
was 1,574.8 people per square mile (607.4/km²). There were 2,856 housing units at an average density of 674.3 per square mile (260.1/km²). The racial makeup of the town was 80.04% White, 16.49% African American, 0.24% Native American, 1.00% Asian, 0.01% Pacific Islander, 0.63% from other races
Race (United States Census)
Race and ethnicity in the United States Census, as defined by the Federal Office of Management and Budget and the United States Census Bureau, are self-identification data items in which residents choose the race or races with which they most closely identify, and indicate whether or not they are...
, and 1.57% from two or more races. Hispanic or Latino of any race were 3.25% of the population.

There were 2,683 households out of which 28.7% had children under the age of 18 living with them, 41.6% were married couples
Marriage
Marriage is a social union or legal contract between people that creates kinship. It is an institution in which interpersonal relationships, usually intimate and sexual, are acknowledged in a variety of ways, depending on the culture or subculture in which it is found...
living together, 14.5% had a female householder with no husband present, and 40.7% were non-families. 33.7% of all households were made up of individuals and 13.2% had someone living alone who was 65 years of age or older. The average household size was 2.33 and the average family size was 3.01.

The median income for a household in the town was $50,760, and the median income for a family was $59,744. Males had a median income of $40,405 versus $31,689 for females. The per capita income
Per capita income
Per capita income or income per person is a measure of mean income within an economic aggregate, such as a country or city. It is calculated by taking a measure of all sources of income in the aggregate and dividing it by the total population...
for the town was $23,552. About 6.7% of families and 9.3% of the population were below the poverty line, including 9.3% of those under age 18 and 10.2% of those age 65 or over.