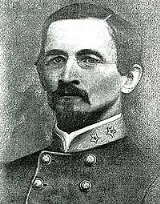 Encyclopedia
Charles Marshall was a Confederate Army officer during the American Civil War
American Civil War
The American Civil War was a civil war fought in the United States of America. In response to the election of Abraham Lincoln as President of the United States, 11 southern slave states declared their secession from the United States and formed the Confederate States of America ; the other 25...
. Marshall served as an aide de camp, assistant adjutant general
Adjutant general
An Adjutant General is a military chief administrative officer.-Imperial Russia:In Imperial Russia, the General-Adjutant was a Court officer, who was usually an army general. He served as a personal aide to the Tsar and hence was a member of the H. I. M. Retinue...
and military secretary
Military Secretary
The Military Secretary is the British Army appointment of which the incumbent is responsible for policy direction on personnel management for members of the British Army. It is a senior British Army appointment, held by an officer holding the rank of Major-General. The Military Secretary's...
to Gen.
General (United States)
In the United States Army, United States Air Force, and United States Marine Corps, general is a four-star general officer rank, with the pay grade of O-10. General ranks above lieutenant general and below General of the Army or General of the Air Force; the Marine Corps does not have an...
Robert E. Lee
Robert E. Lee
Robert Edward Lee was a career military officer who is best known for having commanded the Confederate Army of Northern Virginia in the American Civil War....
. He was also an uncle of WWII General George Marshall
George Marshall
George Catlett Marshall was an American military leader, Chief of Staff of the Army, Secretary of State, and the third Secretary of Defense...
.

Marshall was born in Warrenton, Virginia
Warrenton, Virginia
Warrenton is a town in Fauquier County, Virginia, United States. The population was 6,670 at the 2000 census, and 14,634 at the 2010 estimate. It is the county seat of Fauquier County. Public schools in the town include Fauquier High School, Warrenton Middle School, Taylor Middle School and two...
to Alexander John and Maria Rose Taylor Marshall. He was the great nephew of Chief Justice of the United States
Chief Justice of the United States
The Chief Justice of the United States is the head of the United States federal court system and the chief judge of the Supreme Court of the United States. The Chief Justice is one of nine Supreme Court justices; the other eight are the Associate Justices of the Supreme Court of the United States...
John Marshall
John Marshall
John Marshall was the Chief Justice of the United States whose court opinions helped lay the basis for American constitutional law and made the Supreme Court of the United States a coequal branch of government along with the legislative and executive branches...
and second cousin of Col. James K. Marshall
James K. Marshall
James Keith "Jimmy" Marshall was a Confederate Army officer during the American Civil War. Marshall commanded the wounded J. Johnston Pettigrew's brigade during Pickett's Charge at the Battle of Gettysburg...
who was killed during Pickett's Charge
Pickett's Charge
Pickett's Charge was an infantry assault ordered by Confederate Gen. Robert E. Lee against Maj. Gen. George G. Meade's Union positions on Cemetery Ridge on July 3, 1863, the last day of the Battle of Gettysburg during the American Civil War. Its futility was predicted by the charge's commander,...
. Charles Marshall was educated at the Richard M. Smith School in and the Warren Green Academy in Warrenton before graduating from the University of Virginia
University of Virginia
The University of Virginia is a public research university located in Charlottesville, Virginia, United States, founded by Thomas Jefferson...
with a Master's Degree
Master's degree
A master's is an academic degree granted to individuals who have undergone study demonstrating a mastery or high-order overview of a specific field of study or area of professional practice...
with high honors in 1848. He served as professor
Professor
A professor is a scholarly teacher; the precise meaning of the term varies by country. Literally, professor derives from Latin as a "person who professes" being usually an expert in arts or sciences; a teacher of high rank...
of mathematics
Mathematics
Mathematics is the study of quantity, space, structure, and change. Mathematicians seek out patterns and formulate new conjectures. Mathematicians resolve the truth or falsity of conjectures by mathematical proofs, which are arguments sufficient to convince other mathematicians of their validity...
at Indiana University
Indiana University
Indiana University is a multi-campus public university system in the state of Indiana, United States. Indiana University has a combined student body of more than 100,000 students, including approximately 42,000 students enrolled at the Indiana University Bloomington campus and approximately 37,000...
from 1850 to 1852. Upon returning to Virginia
Virginia
The Commonwealth of Virginia , is a U.S. state on the Atlantic Coast of the Southern United States. Virginia is nicknamed the "Old Dominion" and sometimes the "Mother of Presidents" after the eight U.S. presidents born there...
, Marshall studied law. In 1853, he moved to Baltimore, Maryland where he was admitted to the bar and began practice at the law firm of William Schley
William Schley
William Schley was an American lawyer, jurist, and politician.-Biography:...
. In December 1856, he married Emily Andrews, daughter of Mexican War hero Colonel
Colonel (United States)
In the United States Army, Air Force, and Marine Corps, colonel is a senior field grade military officer rank just above the rank of lieutenant colonel and just below the rank of brigadier general...
Timothy Patrick Andrews and sister of Richard Snowden Andrews
Richard Snowden Andrews
Richard Snowden Andrews was an American architect and a Confederate artillery commander and diplomat during the American Civil War.Andrews was a native of Baltimore, Maryland...
. Marshall and his wife had one daughter. Emily Andrews Marshall died in 1858.

Lee, a long-time family friend, appointed Marshall to his personal staff on March 21, 1862 with the rank of captain. Marshall served as Lee's aide-de-camp and was present with Lee during all the major battles of the Army of Northern Virginia
Army of Northern Virginia
The Army of Northern Virginia was the primary military force of the Confederate States of America in the Eastern Theater of the American Civil War, as well as the primary command structure of the Department of Northern Virginia. It was most often arrayed against the Union Army of the Potomac...
. He was subsequently promoted to major
Major (United States)
In the United States Army, Air Force, and Marine Corps, major is a field grade military officer rank just above the rank of captain and just below the rank of lieutenant colonel...
, lieutenant colonel
Lieutenant Colonel (United States)
In the United States Army, United States Air Force, and United States Marine Corps, a lieutenant colonel is a field grade military officer rank just above the rank of major and just below the rank of colonel. It is equivalent to the naval rank of commander in the other uniformed services.The pay...
and colonel. He was responsible for the writing of Lee's after-action reports during the War. Marshall accompanied Lee at the surrender
Surrender (military)
Surrender is when soldiers, nations or other combatants stop fighting and eventually become prisoners of war, either as individuals or when ordered to by their officers. A white flag is a common symbol of surrender, as is the gesture of raising one's hands empty and open above one's head.When the...
at the Battle of Appomattox Courthouse
Battle of Appomattox Courthouse
The Battle of Appomattox Court House, fought on the morning of April 9, 1865, was the final engagement of Confederate States Army General Robert E. Lee's Army of Northern Virginia before it surrendered to the Union Army under Lt. Gen. Ulysses S. Grant, and one of the last battles of the American...
and drafted Lee's acceptance of the terms of surrender. He also located the Wilmer McLean
Wilmer McLean
Wilmer McLean was a wholesale grocer from Virginia. It is said that the American Civil War started in his front yard and ended in his front parlor....
house where the surrender ceremony took place and drafted Lee's "Farewell Order" to the Army of Northern Virginia.

Following the War, Marshall returned to Baltimore and continued his legal practice, becoming one of the leading attorneys in Baltimore. Marshall delivered the dedication addresses for the monuments to Lee in Richmond, Virginia
Richmond, Virginia
Richmond is the capital of the Commonwealth of Virginia, in the United States. It is an independent city and not part of any county. Richmond is the center of the Richmond Metropolitan Statistical Area and the Greater Richmond area...
and Ulysses S. Grant
Ulysses S. Grant
Ulysses S. Grant was the 18th President of the United States as well as military commander during the Civil War and post-war Reconstruction periods. Under Grant's command, the Union Army defeated the Confederate military and ended the Confederate States of America...
in New York City
New York City
New York is the most populous city in the United States and the center of the New York Metropolitan Area, one of the most populous metropolitan areas in the world. New York exerts a significant impact upon global commerce, finance, media, art, fashion, research, technology, education, and...
.

Marshall's papers were later published in a book called Lee's Aide-de-Camp, edited by Sir Frederick Maurice and in a later edition by Gary W. Gallagher.

Marshall died in Baltimore, Maryland from a stroke
Stroke
A stroke, previously known medically as a cerebrovascular accident , is the rapidly developing loss of brain function due to disturbance in the blood supply to the brain. This can be due to ischemia caused by blockage , or a hemorrhage...
.