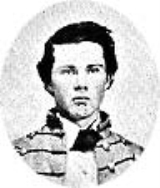 James K. Marshall graduated from the Virginia Military Institute
Virginia Military Institute
The Virginia Military Institute , located in Lexington, Virginia, is the oldest state-supported military college and one of six senior military colleges in the United States. Unlike any other military college in the United States—and in keeping with its founding principles—all VMI students are...
in 1860. He was chosen as the final orator for graduation ceremonies by the Society of Cadets. He also served as first lieutenant of a cadet company. When the Civil War broke out, Marshall was serving as a teacher in Edenton, North Carolina
Edenton, North Carolina
Edenton is a town in Chowan County, North Carolina, United States. The population was 4,966 at the 2008 census. It is the county seat of Chowan County. Edenton is located in North Carolina's Inner Banks region. In recent years Edenton has become a popular retirement location and a destination for...
.

Marshall became a captain of Company M of the 1st North Carolina "Bethel Regiment" of Col.
Colonel (United States)
In the United States Army, Air Force, and Marine Corps, colonel is a senior field grade military officer rank just above the rank of lieutenant colonel and just below the rank of brigadier general...
Daniel Harvey Hill
Daniel Harvey Hill
On July 22, 1862, Hill and Union Maj. Gen. John A. Dix concluded an agreement for the general exchange of prisoners between the Union and Confederate armies. This agreement became known as the Dix-Hill Cartel....
in the spring of 1861. He did not take part in the Battle of Big Bethel
Battle of Big Bethel
The Battle of Big Bethel, also known as the Battle of Bethel Church or Great Bethel was one of the earliest land battles of the American Civil War after the surrender of Fort Sumter...
. He was made colonel of the 52nd North Carolina on April 23, 1862 under the command of Brig. Gen J. Johnston Pettigrew, despite having no combat experience. Marshall was initially elected to the post of lieutenant colonel
Lieutenant colonel
Lieutenant colonel is a rank of commissioned officer in the armies and most marine forces and some air forces of the world, typically ranking above a major and below a colonel. The rank of lieutenant colonel is often shortened to simply "colonel" in conversation and in unofficial correspondence...
and Zebulon Vance was elected colonel, however, Vance declined the position so Marshall took the spot instead. Marshall spent much of this period defending the Blackwater River. Pettigrew's Brigade joined the Army of Northern Virginia
Army of Northern Virginia
The Army of Northern Virginia was the primary military force of the Confederate States of America in the Eastern Theater of the American Civil War, as well as the primary command structure of the Department of Northern Virginia. It was most often arrayed against the Union Army of the Potomac...
in late May 1863, for the Gettysburg Campaign
Gettysburg Campaign
The Gettysburg Campaign was a series of battles fought in June and July 1863, during the American Civil War. After his victory in the Battle of Chancellorsville, Confederate General Robert E. Lee's Army of Northern Virginia moved north for offensive operations in Maryland and Pennsylvania. The...
.

Pettigrew's Brigade saw intense fighting during the Battle of Gettysburg. On July 1, 1863, Marshall's regiment initially encountered two companies from the 80th New York Infantry at the Harmon farm. A detachment of this regiment burned down the house, and barn, sending Amelia Harmon and her aunt, who were still inside, running westward away from the danger. After dispersing these men, a portion of the 52nd North Carolina fought part of the 8th New York Cavalry at Meal's Orchard. The 52nd crossed Willoughby Run and faced resistance from more cavalry units around Fairfield Road. After crossing Fairfield Road, Marshall's men slammed into the flank of the 121st Pennsylvania of Lt. Col. Alexander Biddle
Alexander Biddle
Alexander Biddle was an officer in the Union Army during the American Civil War.-Life:His father was Thomas A. Biddle , the son of American Revolutionary War soldier Clement Biddle ....
, routing them from the field and sending them running toward Seminary Ridge
Seminary Ridge
Seminary Ridge is a dendritic ridge which was an area of Battle of Gettysburg engagements during the American Civil War and of military installations during World War II.-Geography:...
. Marshall's men next attacked the 80th New York of Col. Theodore Gates and forced them to retreat. Soon after this attack, Maj. Gen.
Major general (United States)
In the United States Army, United States Marine Corps, and United States Air Force, major general is a two-star general-officer rank, with the pay grade of O-8. Major general ranks above brigadier general and below lieutenant general...
Henry Heth
Henry Heth
Henry "Harry" Heth was a career United States Army officer and a Confederate general in the American Civil War. He is best remembered for inadvertently precipitating the Battle of Gettysburg, when he sent some of his troops of the Army of Northern Virginia to the small Pennsylvania village,...
was wounded and Pettigrew was elevated to divisional command. Due to the high casualty rate in Pettigrew's Brigade command structure, Marshall was given charge of it. The brigade suffered 1,100 casualties
Casualty of war
Casualty of war: Military or civilian casualty suffered in war or deployments on the side in which it occurred.-See also:Related terms* Casualty* Collateral damage* Conflict epidemiology* Fragging* Friendly fireStatistics...
out of 2,584 engaged, however Marshall's 52nd North Carolina suffered only 26 casualties.

The brigade was not involved in any fighting on July 2, 1863. Marshall had the brigade's Moravian band perform for the men to heighten their morale after the first day's carnage.

Leading the decimated brigade during Pickett's Charge, Marshall's men crossed the field around the Bliss Farm and Stevens' Run and then crossed the Emmitsburg Rd, coming under withering fire at the fence line. While crossing the Emmitsburg Road, Marshall turned to Capt. Stockton Heath (son of Maj. Gen. Henry Heth) and said "We do not know which of us will be next to fall." Just minutes later, as Marshall neared the stonewall on Cemetery Ridge
Cemetery Ridge
Cemetery Ridge is a geographic feature in Gettysburg National Military Park south of the town of Gettysburg, Pennsylvania, that figured prominently in the Battle of Gettysburg, July 1 to July 3, 1863. It formed a primary defensive position for the Union Army during the battle, roughly the center of...
he was struck in the forehead and killed instantly by two bullets while cheering his men on.

Marshall's family did not know what had happened to him until several months later when they received a letter from Marshall's cousin F. Lewis Marshall informing them of James K. Marshall's death at Gettysburg. The family had heard conflicting reports of Marshall's fate, and thought that he was a prisoner of war
Prisoner of war
A prisoner of war or enemy prisoner of war is a person, whether civilian or combatant, who is held in custody by an enemy power during or immediately after an armed conflict...
.

Marshall's remains were buried on the field at Gettysburg. It is assumed, but not known for sure, that he was re-interred at Hollywood Cemetery in Richmond, Virginia
Richmond, Virginia
Richmond is the capital of the Commonwealth of Virginia, in the United States. It is an independent city and not part of any county. Richmond is the center of the Richmond Metropolitan Statistical Area and the Greater Richmond area...
.