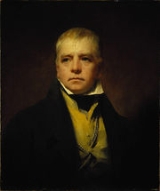 Encyclopedia
Sir Walter Scott, 1st Baronet (15 August 1771 – 21 September 1832) was a Scottish historical novelist, playwright, and poet, popular throughout much of the world during his time.

Scott was the first English-language author to have a truly international career in his lifetime, with many contemporary readers in Europe, Australia, and North America. His novels and poetry are still read, and many of his works remain classics of both English-language literature and of Scottish literature
Scottish literature
Scottish literature is literature written in Scotland or by Scottish writers. It includes literature written in English, Scottish Gaelic, Scots, Brythonic, French, Latin and any other language in which a piece of literature was ever written within the boundaries of modern Scotland.The earliest...
. Famous titles include Ivanhoe
Ivanhoe
Ivanhoe is a historical fiction novel by Sir Walter Scott in 1819, and set in 12th-century England. Ivanhoe is sometimes credited for increasing interest in Romanticism and Medievalism; John Henry Newman claimed Scott "had first turned men's minds in the direction of the middle ages," while...
, Rob Roy
Rob Roy (novel)
Rob Roy is a historical novel by Walter Scott. It is narrated by Frank Osbaldistone, the son of an English merchant who travels first to the North of England, and subsequently to the Scottish Highlands to collect a debt stolen from his father. On the way he encounters the larger-than-life title...
, The Lady of the Lake
The Lady of the Lake (poem)
The Lady of the Lake is a narrative poem by Sir Walter Scott, first published in 1810. Set in the Trossachs region of Scotland, it is composed of six cantos, each of which concerns the action of a single day...
, Waverley
Waverley (novel)
Waverley is an 1814 historical novel by Sir Walter Scott. Initially published anonymously in 1814 as Scott's first venture into prose fiction, Waverley is often regarded as the first historical novel. It became so popular that Scott's later novels were advertised as being "by the author of...
, The Heart of Midlothian
The Heart of Midlothian
The Heart of Midlothian is the seventh of Sir Walter Scott’s Waverley Novels. It was originally published in four volumes on 25 July 1818, under the title of Tales of My Landlord, 2nd series, and the author was given as "Jedediah Cleishbotham, Schoolmaster and Parish-clerk of Gandercleugh"...
and The Bride of Lammermoor
The Bride of Lammermoor
The Bride of Lammermoor is a historical novel by Sir Walter Scott, set in Scotland in the reign of Queen Anne . The novel tells of a tragic love affair between Lucy Ashton and her family's enemy Edgar Ravenswood. Scott indicated the plot was based on an actual incident...
.

Born in College Wynd in the Old Town
Old Town, Edinburgh
The Old Town of Edinburgh, the capital of Scotland, is the medieval part of the city. Together with the 18th-century New Town, it is a UNESCO World Heritage Site. It has preserved its medieval plan and many Reformation-era buildings....
of Edinburgh
Edinburgh
Edinburgh is the capital city of Scotland, the second largest city in Scotland, and the eighth most populous in the United Kingdom. The City of Edinburgh Council governs one of Scotland's 32 local government council areas. The council area includes urban Edinburgh and a rural area...
in 1771, the son of a solicitor, Scott survived a childhood bout of polio in 1773 that left him lame. To cure his lameness he was sent in 1773 to live in the rural Borders
Scottish Borders
The Scottish Borders is one of 32 local government council areas of Scotland. It is bordered by Dumfries and Galloway in the west, South Lanarkshire and West Lothian in the north west, City of Edinburgh, East Lothian, Midlothian to the north; and the non-metropolitan counties of Northumberland...
region at his grandparents' farm at Sandyknowe, adjacent to the ruin of Smailholm Tower
Smailholm Tower
Smailholm Tower is a peel tower at Smailholm, around five miles west of Kelso in the Scottish Borders. Its dramatic situation, atop a crag of Lady Hill, commands wide views over the surrounding countryside. The tower is located at grid reference , just west of Sandyknowe farm, and is now a...
, the earlier family home. Here he was taught to read by his aunt Jenny, and learned from her the speech patterns and many of the tales and legends that characterised much of his work. In January 1775 he returned to Edinburgh, and that summer went with his aunt Jenny to take spa treatment at Bath in England, where they lived at 6 South Parade
South Parade, Bath
South Parade in Bath, Somerset, England is a historic terrace built around 1743 by John Wood, the Elder. All of the houses have been designated as Grade I listed buildings....
. In the winter of 1776 he went back to Sandyknowe, with another attempt at a water cure at Prestonpans
Prestonpans
Prestonpans is a small town to the east of Edinburgh, Scotland, in the unitary council area of East Lothian. It has a population of 7,153 . It is the site of the 1745 Battle of Prestonpans, and has a history dating back to the 11th century...
during the following summer.
In 1778 Scott returned to Edinburgh for private education to prepare him for school, and in October 1779 he began at the Royal High School of Edinburgh
Royal High School (Edinburgh)
The Royal High School of Edinburgh is a co-educational state school administered by the City of Edinburgh Council. The school was founded in 1128 and is one of the oldest schools in Scotland, and has, throughout its history, been high achieving, consistently attaining well above average exam results...
. He was now well able to walk and explore the city and the surrounding countryside. His reading included chivalric romances, poems, history and travel books. He was given private tuition by James Mitchell in arithmetic and writing, and learned from him the history of the Kirk
Church of Scotland
The Church of Scotland, known informally by its Scots language name, the Kirk, is a Presbyterian church, decisively shaped by the Scottish Reformation....
with emphasis on the Covenanters. After finishing school he was sent to stay for six months with his aunt Jenny in Kelso, attending the local Grammar School
Kelso High School (Scotland)
Kelso High School is a secondary school in Kelso, Scotland, under the control of the Scottish Borders Council. It is one of nine secondary schools in the Scottish Borders and the only one in Kelso. Pupils come to Kelso High School from the town of Kelso, the villages of Ednam, Eckford, Heiton,...
where he met James and John Ballantyne who later became his business partners and printed his books.


Scott's meeting with Blacklock and Burns

Scott began studying classics at the University of Edinburgh
University of Edinburgh
The University of Edinburgh, founded in 1583, is a public research university located in Edinburgh, the capital of Scotland, and a UNESCO World Heritage Site. The university is deeply embedded in the fabric of the city, with many of the buildings in the historic Old Town belonging to the university...
in November 1783, at the age of only 12, a year or so younger than most of his fellow students. In March 1786 he began an apprenticeship in his father's office to become a Writer to the Signet. While at the university Scott had become a friend of Adam Ferguson, the son of Professor Adam Ferguson
Adam Ferguson
Adam Ferguson FRSE, also known as Ferguson of Raith was a Scottish philosopher, social scientist and historian of the Scottish Enlightenment...
who hosted literary salons. Scott met the blind poet Thomas Blacklock
Thomas Blacklock
Thomas Blacklock was a Scottish poet.He was born near Annan, Dumfries and Galloway, of humble parentage, and lost his sight as a result of smallpox when six months old. He began to write poetry at the age of 12, and studied for the Church...
who lent him books as well as introducing him to James Macpherson
James Macpherson
James Macpherson was a Scottish writer, poet, literary collector and politician, known as the "translator" of the Ossian cycle of poems.-Early life:...
's Ossian
Ossian
Ossian is the narrator and supposed author of a cycle of poems which the Scottish poet James Macpherson claimed to have translated from ancient sources in the Scots Gaelic. He is based on Oisín, son of Finn or Fionn mac Cumhaill, anglicised to Finn McCool, a character from Irish mythology...
cycle of poems. During the winter of 1786–87 the 15-year-old Scott saw Robert Burns
Robert Burns
Robert Burns was a Scottish poet and a lyricist. He is widely regarded as the national poet of Scotland, and is celebrated worldwide...
at one of these salons, for what was to be their only meeting. When Burns noticed a print illustrating the poem "The Justice of the Peace" and asked who had written the poem, only Scott knew that it was by John Langhorne, and was thanked by Burns. When it was decided that he would become a lawyer, he returned to the university to study law, first taking classes in Moral Philosophy and Universal History in 1789–90.