The Lammermuir Hills, usually simply called the Lammermuirs (An Lomair Mòr in Gaelic
Scottish Gaelic language
Scottish Gaelic is a Celtic language native to Scotland. A member of the Goidelic branch of the Celtic languages, Scottish Gaelic, like Modern Irish and Manx, developed out of Middle Irish, and thus descends ultimately from Primitive Irish....
) (occasionally anglicised Lammermoors), in southern Scotland
Scotland
Scotland is a country that is part of the United Kingdom. Occupying the northern third of the island of Great Britain, it shares a border with England to the south and is bounded by the North Sea to the east, the Atlantic Ocean to the north and west, and the North Channel and Irish Sea to the...
, form a natural boundary between Lothian
Lothian
Lothian forms a traditional region of Scotland, lying between the southern shore of the Firth of Forth and the Lammermuir Hills....
and the Scottish Borders
Scottish Borders
The Scottish Borders is one of 32 local government council areas of Scotland. It is bordered by Dumfries and Galloway in the west, South Lanarkshire and West Lothian in the north west, City of Edinburgh, East Lothian, Midlothian to the north; and the non-metropolitan counties of Northumberland...
.

They span the areas of East Lothian Council and the Scottish Borders Council, and they extend from Gala Water
Gala Water
The Gala Water is a river in the Scottish Borders area of Scotland and a tributary of the River Tweed. It is sometimes known as the "Gala", which nickname is also shared with Galashiels, which it flows through. The "Braw Lads O Gala Watter" is a song about people from Galashiels.-Gallery:...
to St. Abb's Head, and offer a traditional site for sheep grazing. 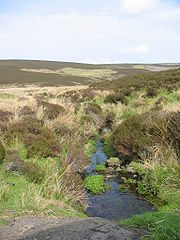 The hills are nowhere especially high, the highest points being Meikle Says Law at 535 m (1,755.2 ft) and the Lammer Law at 528 m (1,732.3 ft), but steep gradients, exposure to the elements and a lack of natural passes combine to form a formidable barrier to communications between Edinburgh
Edinburgh
Edinburgh is the capital city of Scotland, the second largest city in Scotland, and the eighth most populous in the United Kingdom. The City of Edinburgh Council governs one of Scotland's 32 local government council areas. The council area includes urban Edinburgh and a rural area...
and the Borders.

The hills are crossed by only one major road (the A68
A68 road
The A68 is a major road in the United Kingdom, running from Darlington in England to the A720 in Scotland.From Darlington, the road runs north, bypassing Bishop Auckland, and running through West Auckland, Toft Hill and Tow Law, past Consett and Corbridge...
), which crosses the shoulder of Soutra Hill between Lauder
Lauder
The Royal Burgh of Lauder is a town in the Scottish Borders 27 miles south east of Edinburgh. It is also a royal burgh in the county of Berwickshire. It lies on the edge of the Lammermuir Hills, on the Southern Upland Way.-Medieval history:...
and Pathhead
Pathhead, Midlothian
Pathhead is a conservation village in Midlothian, Scotland.-Location:Pathhead is located around south east of Dalkeith and south of Scotland's capital city, Edinburgh. It lies above the east bank of the River Tyne. The name of the village is due to its position. It stands above sea level and is...
, and is frequently closed by snow in winter. The main road linking Edinburgh to England
England
England is a country that is part of the United Kingdom. It shares land borders with Scotland to the north and Wales to the west; the Irish Sea is to the north west, the Celtic Sea to the south west, with the North Sea to the east and the English Channel to the south separating it from continental...
(the A1) avoids the hills by following a circuitous route around the coast

The name Lammermuir literally means "lambs' moor" or "moorland of the lambs" from the Old English genitive plural
Plural
In linguistics, plurality or [a] plural is a concept of quantity representing a value of more-than-one. Typically applied to nouns, a plural word or marker is used to distinguish a value other than the default quantity of a noun, which is typically one...
"lambra" ("lambs") and the noun
Noun
In linguistics, a noun is a member of a large, open lexical category whose members can occur as the main word in the subject of a clause, the object of a verb, or the object of a preposition .Lexical categories are defined in terms of how their members combine with other kinds of...
"mor" ("moorland", "swamp", "waste ground"). Early forms include Lombormore, Lambremore, Lambermora and Lambirmor. Another place-name with the element "lambra" is Lamberton.

White Castle
White Castle, East Lothian
Whitecastle was originally a hillfort in East Lothian, Scotland, situated on the edge of the Lammermuir Hills, two miles south of the village of Garvald, . It later formed part of a landed estate which is known today as Nunraw...
was an Iron Age hill fort
Hill fort
A hill fort is a type of earthworks used as a fortified refuge or defended settlement, located to exploit a rise in elevation for defensive advantage. They are typically European and of the Bronze and Iron Ages. Some were used in the post-Roman period...
, settled by the ancestors of the Votadini
Votadini
The Votadini were a people of the Iron Age in Great Britain, and their territory was briefly part of the Roman province Britannia...
tribe.

Two ranges of hills in New Zealand
New Zealand
New Zealand is an island country in the south-western Pacific Ocean comprising two main landmasses and numerous smaller islands. The country is situated some east of Australia across the Tasman Sea, and roughly south of the Pacific island nations of New Caledonia, Fiji, and Tonga...
, the Lammermoor Range and Lammerlaw Range are named after the Scottish hills and their second highest point respectively.