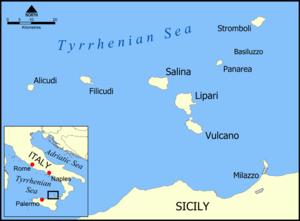 Vulcano is a small volcanic island in the Tyrrhenian Sea
Tyrrhenian Sea
The Tyrrhenian Sea is part of the Mediterranean Sea off the western coast of Italy.-Geography:The sea is bounded by Corsica and Sardinia , Tuscany, Lazio, Campania, Basilicata and Calabria and Sicily ....
, about 25 km north of Sicily
Sicily
Sicily is a region of Italy, and is the largest island in the Mediterranean Sea. Along with the surrounding minor islands, it constitutes an autonomous region of Italy, the Regione Autonoma Siciliana Sicily has a rich and unique culture, especially with regard to the arts, music, literature,...
and the southernmost of the eight Aeolian Islands
Aeolian Islands
The Aeolian Islands or Lipari Islands are a volcanic archipelago in the Tyrrhenian Sea north of Sicily, named after the demigod of the winds Aeolus. The locals residing on the islands are known as Eolians . The Aeolian Islands are a popular tourist destination in the summer, and attract up to...
. It is 21 square kilometers in area, rises to 499 meters, and contains several volcanic centers, including one of four active non-submarine volcanoes in Italy
Italy
Italy , officially the Italian Republic languages]] under the European Charter for Regional or Minority Languages. In each of these, Italy's official name is as follows:;;;;;;;;), is a unitary parliamentary republic in South-Central Europe. To the north it borders France, Switzerland, Austria and...
.

The Roman
Ancient Rome
Ancient Rome was a thriving civilization that grew on the Italian Peninsula as early as the 8th century BC. Located along the Mediterranean Sea and centered on the city of Rome, it expanded to one of the largest empires in the ancient world....
name for the island Vulcano has contributed the word for volcano
Volcano
2. Bedrock3. Conduit 4. Base5. Sill6. Dike7. Layers of ash emitted by the volcano8. Flank| 9. Layers of lava emitted by the volcano10. Throat11. Parasitic cone12. Lava flow13. Vent14. Crater15...
in most modern European languages. The Romans used the island mainly for raw materials, harvesting wood
Wood
Wood is a hard, fibrous tissue found in many trees. It has been used for hundreds of thousands of years for both fuel and as a construction material. It is an organic material, a natural composite of cellulose fibers embedded in a matrix of lignin which resists compression...
and mining
Mining
Mining is the extraction of valuable minerals or other geological materials from the earth, from an ore body, vein or seam. The term also includes the removal of soil. Materials recovered by mining include base metals, precious metals, iron, uranium, coal, diamonds, limestone, oil shale, rock...
alum
Alum
Alum is both a specific chemical compound and a class of chemical compounds. The specific compound is the hydrated potassium aluminium sulfate with the formula KAl2.12H2O. The wider class of compounds known as alums have the related empirical formula, AB2.12H2O.-Chemical properties:Alums are...
and sulfur
Sulfur
Sulfur or sulphur is the chemical element with atomic number 16. In the periodic table it is represented by the symbol S. It is an abundant, multivalent non-metal. Under normal conditions, sulfur atoms form cyclic octatomic molecules with chemical formula S8. Elemental sulfur is a bright yellow...
. This was the principal activity on the island until the end of the 19th Century.

When the Bourbon
House of Bourbon
The House of Bourbon is a European royal house, a branch of the Capetian dynasty . Bourbon kings first ruled Navarre and France in the 16th century. By the 18th century, members of the Bourbon dynasty also held thrones in Spain, Naples, Sicily, and Parma...
rule collapsed in 1860 (see Francis II of the Two Sicilies
Francis II of the Two Sicilies
Francis II , was King of the Two Sicilies from 1859 to 1861. He was the last King of the Two Sicilies, as successive invasions by Giuseppe Garibaldi and Victor Emmanuel II of Sardinia ultimately brought an end to his rule, and marked the first major event of Italian unification...
) a British man named James Stevenson bought the northern part of the island, built a villa
Villa
A villa was originally an ancient Roman upper-class country house. Since its origins in the Roman villa, the idea and function of a villa have evolved considerably. After the fall of the Roman Republic, villas became small farming compounds, which were increasingly fortified in Late Antiquity,...
, reopened the local mines and planted vineyard
Vineyard
A vineyard is a plantation of grape-bearing vines, grown mainly for winemaking, but also raisins, table grapes and non-alcoholic grape juice...
s for grapes that would later be used to make Malmsey wine
Wine
Wine is an alcoholic beverage, made of fermented fruit juice, usually from grapes. The natural chemical balance of grapes lets them ferment without the addition of sugars, acids, enzymes, or other nutrients. Grape wine is produced by fermenting crushed grapes using various types of yeast. Yeast...
. Stevenson lived on Vulcano until the last major eruption on the island, in 1888. The eruption lasted the better part of two years, by which time Stevenson had sold all of his property to the local populace, and never returned to the island. The villa is still intact.

Currently, around 470 people live on the island, mainly deriving their income from tourism. It is a few minutes hydrofoil
Hydrofoil
A hydrofoil is a foil which operates in water. They are similar in appearance and purpose to airfoils.Hydrofoils can be artificial, such as the rudder or keel on a boat, the diving planes on a submarine, a surfboard fin, or occur naturally, as with fish fins, the flippers of aquatic mammals, the...
ride from Lipari
Lipari
Lipari is the largest of the Aeolian Islands in the Tyrrhenian Sea off the north coast of Sicily, and the name of the island's main town. It has a permanent population of 11,231; during the May–September tourist season, its population may reach up to 20,000....
and has several hotels and cafes, the important attractions being the beaches, hot springs and sulfur mud baths.

The volcanic activity in the region is largely the result of the northward-moving African Plate
African Plate
The African Plate is a tectonic plate which includes the continent of Africa, as well as oceanic crust which lies between the continent and various surrounding ocean ridges.-Boundaries:...
meeting the Eurasian Plate
Eurasian Plate
The Eurasian Plate is a tectonic plate which includes most of the continent of Eurasia , with the notable exceptions of the Indian subcontinent, the Arabian subcontinent, and the area east of the Chersky Range in East Siberia...
. There are three volcanic centres on the island:


Vulcano has been quiet since the eruption of the Fossa cone on 3 August 1888 to 1890, which deposited about 5 metres of pyroclastic material on the summit. The style of eruption seen on the Fossa cone is called a Vulcanian eruption
Vulcanian eruption
The term Vulcanian was first used by Giuseppe Mercalli, witnessing the 1888-1890 eruptions on the island of Vulcano. His description of the eruption style is now used all over the world for eruptions characterised by a dense cloud of ash-laden gas exploding from the crater and rising high above the...
, being the explosive emission of pyroclastic fragments of viscous magma
Magma
Magma is a mixture of molten rock, volatiles and solids that is found beneath the surface of the Earth, and is expected to exist on other terrestrial planets. Besides molten rock, magma may also contain suspended crystals and dissolved gas and sometimes also gas bubbles. Magma often collects in...
s caused by the high viscosity preventing gases from escaping easily. This eruption of Vulcano was carefully documented at the time by Giuseppe Mercalli
Giuseppe Mercalli
Giuseppe Mercalli was an Italian volcanologist. He is best remembered today for his Mercalli scale for measuring earthquakes which is still used today.-Biography:...
.

The Ancient Greeks named the island Therassía (Θηρασία) and Thérmessa (Θέρμεσσα, source of heat). The island appeared in their myths
Greek mythology
Greek mythology is the body of myths and legends belonging to the ancient Greeks, concerning their gods and heroes, the nature of the world, and the origins and significance of their own cult and ritual practices. They were a part of religion in ancient Greece...
as the private workshop of the Olympian god
Twelve Olympians
The Twelve Olympians, also known as the Dodekatheon , in Greek mythology, were the principal deities of the Greek pantheon, residing atop Mount Olympus. Zeus, Hera, Poseidon, Demeter, Hestia, and Hades were siblings. Ares, Hermes, Hephaestus, Athena, Apollo, and Artemis were children of Zeus...
Hephaestus
Hephaestus
Hephaestus was a Greek god whose Roman equivalent was Vulcan. He is the son of Zeus and Hera, the King and Queen of the Gods - or else, according to some accounts, of Hera alone. He was the god of technology, blacksmiths, craftsmen, artisans, sculptors, metals, metallurgy, fire and volcanoes...
, protector of the blacksmith
Blacksmith
A blacksmith is a person who creates objects from wrought iron or steel by forging the metal; that is, by using tools to hammer, bend, and cut...
s; he owned another two at Etna
Mount Etna
Mount Etna is an active stratovolcano on the east coast of Sicily, close to Messina and Catania. It is the tallest active volcano in Europe, currently standing high, though this varies with summit eruptions; the mountain is 21 m higher than it was in 1981.. It is the highest mountain in...
and Olympus. Strabo
Strabo
Strabo, also written Strabon was a Greek historian, geographer and philosopher.-Life:Strabo was born to an affluent family from Amaseia in Pontus , a city which he said was situated the approximate equivalent of 75 km from the Black Sea...
also mentions Thermessa as sacred place of Hephaestus (ἱερὰ Ἡφαίστου), but it's not clear if it was a third name for the island, or just an adjective
Adjective
In grammar, an adjective is a 'describing' word; the main syntactic role of which is to qualify a noun or noun phrase, giving more information about the object signified....
.

Similarly the Romans believed that Vulcano was the chimney to the god Vulcan's workshop. The island had grown due to his periodic clearing of cinders and ashes from his forge. The earthquakes that either preceded or accompanied the explosions of ash etc., were considered to be due to Vulcan making weapons for Mars and his armies to wage war.