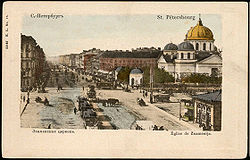 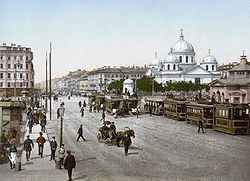 Vosstaniya Square is a major square in the Central Business District of Saint Petersburg
Saint Petersburg
Saint Petersburg is a city and a federal subject of Russia located on the Neva River at the head of the Gulf of Finland on the Baltic Sea...
, Russia
Russia
Russia or , officially known as both Russia and the Russian Federation , is a country in northern Eurasia. It is a federal semi-presidential republic, comprising 83 federal subjects...
. The square lies at the crossing of Nevsky Prospekt
Nevsky Prospekt
Nevsky Avenue |Prospekt]]) is the main street in the city of St. Petersburg, Russia. Planned by Peter the Great as beginning of the road to Novgorod and Moscow, the avenue runs from the Admiralty to the Moscow Railway Station and, after making a turn at Vosstaniya Square, to the Alexander...
, Ligovsky Prospekt
Ligovsky Prospekt
Ligovsky Prospekt is a major street in Saint Petersburg. Before the establishment of the city, it was a street leading to Novgorod, used by the people living in the villages around the delta of Neva....
, Vosstaniya Street and Goncharnaya Street, in front of the Moskovsky Rail Terminal, which is the northern terminus of the line connecting the city with Moscow
Moscow
Moscow is the capital, the most populous city, and the most populous federal subject of Russia. The city is a major political, economic, cultural, scientific, religious, financial, educational, and transportation centre of Russia and the continent...
. Administratively, the Vosstaniya Square falls under the authority of the Tsentralny District
Tsentralny District, Saint Petersburg
Tsentralny District is a district of the federal city of Saint Petersburg, Russia. It borders the Neva River in the north and in the east, Obvodny Canal in the south, and areas around the Gorokhovaya Street in the west...
.

Prior to the February Revolution
February Revolution
The February Revolution of 1917 was the first of two revolutions in Russia in 1917. Centered around the then capital Petrograd in March . Its immediate result was the abdication of Tsar Nicholas II, the end of the Romanov dynasty, and the end of the Russian Empire...
, the square was known as Znamenskaya, after the church of the Sign, which was built there in 1794-1804 to a Neoclassical
Neoclassical architecture
Neoclassical architecture was an architectural style produced by the neoclassical movement that began in the mid-18th century, manifested both in its details as a reaction against the Rococo style of naturalistic ornament, and in its architectural formulas as an outgrowth of some classicizing...
design by Fyodor Demertsov. The square was a scene of many revolutionary demonstrations and protests. After the Bolsheviks seized the city, they had the square renamed into the Uprising Square to commemorate these events. The church of the Sign was torn down in 1940 to make room for the surface vestibule of the Ploshchad Vosstaniya
Ploshchad Vosstaniya
Ploshchad Vosstaniya is a station on the Kirovsko-Vyborgskaya Line of Saint Petersburg Metro. It is one of the system's original stations, opening on November 15, 1955. It is a deep underground pylon station at 58 m depth. The main surface vestibule is situated on Vosstaniya Square, which gives...
metro station (opened in 1955).

The roundabout at the center of the square was formerly dominated by Paolo Troubetzkoy
Paolo Troubetzkoy
Prince Paolo or Paul Troubetzkoy was an artist and a sculptor, of Russia's Troubetzkoy princely family, who was described by G.B. Shaw as "the most astonishing sculptor of modern times".-Life:He worked in Russia, America, England and Italy...
's equestrian statue of Alexander III of Russia
Alexander III of Russia
Alexander Alexandrovich Romanov , historically remembered as Alexander III or Alexander the Peacemaker reigned as Emperor of Russia from until his death on .-Disposition:...
. In 1937, the Communist authorities moved the famous impressionist sculpture out of the square (it was put into the courtyard of the Marble Palace
Marble Palace
Marble Palace is one of the first Neoclassical palaces in Saint Petersburg, Russia. It is situated between the Field of Mars and Palace Quay, slightly to the east from New Michael Palace....
in the early 1990s).
The Hero-City Obelisk
Hero-City Obelisk
The Hero-City Obelisk is located in Vosstaniya Square in Saint Petersburg, Russia, which was known as Leningrad from 1924 to 1991. It was installed on Victory Day of May 1985 to commemorate the fortieth anniversary of the Red Army's victory the in the German-Soviet War. The monument was designed...
was erected on the same spot, in order to commemorate the 40th anniversary of the Victory Day
Victory Day (Eastern Europe)
Victory Day or 9 May marks the capitulation of Nazi Germany to the Soviet Union in the Second World War...
in 1985 design by Vladimir Lukyanov and Aleksandr Alymov.

The Vosstaniya Square is a major traffic hub of Saint Petersburg. It's home to the large Moscow Rail Terminal
Moscow Rail Terminal
Moskovsky Rail Terminal , also called Moscow Rail Terminal, with an easily recognizable Neo-Renaissance frontage on Nevsky Prospekt and Uprising Square, is a terminal railway station in Saint Petersburg, Russia...
, from where trains depart for Moscow
Moscow
Moscow is the capital, the most populous city, and the most populous federal subject of Russia. The city is a major political, economic, cultural, scientific, religious, financial, educational, and transportation centre of Russia and the continent...
, Novosibirsk
Novosibirsk
Novosibirsk is the third-largest city in Russia, after Moscow and Saint Petersburg, and the largest city of Siberia, with a population of 1,473,737 . It is the administrative center of Novosibirsk Oblast as well as of the Siberian Federal District...
and other major cities, it is filled with passengers every day.
The square is home to the metro station
Saint Petersburg Metro
The Saint Petersburg Metro is the underground railway system in Saint Petersburg and Leningrad Oblast, Russia. It has been open since November 15, 1955.Formerly known as the V.I...
Ploshchad Vosstaniya
Ploshchad Vosstaniya
Ploshchad Vosstaniya is a station on the Kirovsko-Vyborgskaya Line of Saint Petersburg Metro. It is one of the system's original stations, opening on November 15, 1955. It is a deep underground pylon station at 58 m depth. The main surface vestibule is situated on Vosstaniya Square, which gives...
. The square is also a main hub for marshrutka
Marshrutka
Marshrutka , from marshrutnoye taksi is a share taxi in the CIS countries, the Baltic states, and Bulgaria. Marshrutnoye taksi literally means routed taxicab...
s, taxis
Taxicab
A taxicab, also taxi or cab, is a type of vehicle for hire with a driver, used by a single passenger or small group of passengers, often for a non-shared ride. A taxicab conveys passengers between locations of their choice...
, bus
Bus
A bus is a road vehicle designed to carry passengers. Buses can have a capacity as high as 300 passengers. The most common type of bus is the single-decker bus, with larger loads carried by double-decker buses and articulated buses, and smaller loads carried by midibuses and minibuses; coaches are...
es, trolleybus
Trolleybus
A trolleybus is an electric bus that draws its electricity from overhead wires using spring-loaded trolley poles. Two wires and poles are required to complete the electrical circuit...
es and tram
Tram
A tram is a passenger rail vehicle which runs on tracks along public urban streets and also sometimes on separate rights of way. It may also run between cities and/or towns , and/or partially grade separated even in the cities...
s. 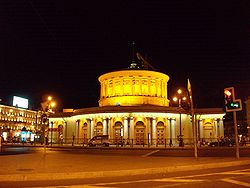