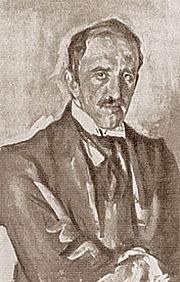 He worked in Russia
Russia
Russia or , officially known as both Russia and the Russian Federation , is a country in northern Eurasia. It is a federal semi-presidential republic, comprising 83 federal subjects...
, America
United States
The United States of America is a federal constitutional republic comprising fifty states and a federal district...
, England
England
England is a country that is part of the United Kingdom. It shares land borders with Scotland to the north and Wales to the west; the Irish Sea is to the north west, the Celtic Sea to the south west, with the North Sea to the east and the English Channel to the south separating it from continental...
and Italy. He was a self taught artist, although he learned sculpture from Giuseppe Grandi
Giuseppe Grandi
Giuseppe Grandi was an Italian sculptor, painter and engraver.-Life:Taught by Vela at the Accademia di Brera, in 1866 he won the Canonica competition with a sculpture called Ulisse and began to work on a verist sculpture of Tabacchi at Turin. After his Turin period, he returned to Milan, where he...
. He is associated with impressionism
Impressionism
Impressionism was a 19th-century art movement that originated with a group of Paris-based artists whose independent exhibitions brought them to prominence during the 1870s and 1880s...
, due to his ability to grasp sketchy movements in his bronze
Bronze
Bronze is a metal alloy consisting primarily of copper, usually with tin as the main additive. It is hard and brittle, and it was particularly significant in antiquity, so much so that the Bronze Age was named after the metal...
works. He portrait
Portrait
thumb|250px|right|Portrait of [[Thomas Jefferson]] by [[Rembrandt Peale]], 1805. [[New-York Historical Society]].A portrait is a painting, photograph, sculpture, or other artistic representation of a person, in which the face and its expression is predominant. The intent is to display the likeness,...
ed the society
Society
A society, or a human society, is a group of people related to each other through persistent relations, or a large social grouping sharing the same geographical or virtual territory, subject to the same political authority and dominant cultural expectations...
of the Belle Époque
Belle Époque
The Belle Époque or La Belle Époque was a period in European social history that began during the late 19th century and lasted until World War I. Occurring during the era of the French Third Republic and the German Empire, it was a period characterised by optimism and new technological and medical...
. Few of his bronzes are still available in the market. Quite famous is the 35 cm high portrait of Constance Stewart-Richardson
Constance Stewart-Richardson
Constance Stewart-Richardson was a dancer.-Biography:She was a daughter of the Francis Mackenzie, 2nd Earl of Cromartie and sister of the Sibell Lilian Blunt-Mackenzie, 3rd Countess of Cromartie . She married Sir Edward Austin Stewart-Richardson, 15th Baronet in 1904 and had two sons. She lived...
called "The Dancer".

Troubetzkoy was a vegetarian. His vegetarian friend Bernard Shaw remarked: “Troubetzkoy is a gigantic and terrifying humanitarian who can do anything with an animal except eat it”.
Alexandra Tolstoy, daughter of the great novelist Leo Tolstoy
Leo Tolstoy
Lev Nikolayevich Tolstoy was a Russian writer who primarily wrote novels and short stories. Later in life, he also wrote plays and essays. His two most famous works, the novels War and Peace and Anna Karenina, are acknowledged as two of the greatest novels of all time and a pinnacle of realist...
wrote in her father’s biography: "From time to time he posed – a tiring obligation – for painters and sculptors: for Repin, Pasternak who did a study of the family, Aronson, and Paolo Trubetskoy. Trubetskoy, a Russian educated in Italy, did some splendid little statues of Tolstoy – one of him on horseback. Father was very fond of him. A sweet and childlike person in addition to his great gifts, he read practically nothing, spoke little, all his life was wrapped up in sculpture. As a convinced vegetarian he would not eat meat but cried: “Je ne mange pas de cadavre!” if anyone offered him some. In his studio in St. Petersburg there was a whole zoo: a bear, a fox, a horse, and a vegetarian wolf."

Troubetzkoy once said “As I cannot kill, I cannot authorize others to kill. Do you see? If you are buying from a butcher you are authorizing him to kill – to kill helpless, dumb creatures which neither you nor I could kill ourselves.”