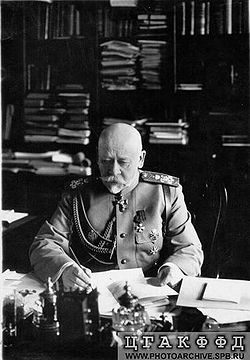 Vladimir Aleksandrovich Sukhomlinov ' onMouseout='HidePop("52948")' href="/topics/Kaunas">Kaunas
Kaunas
Kaunas is the second-largest city in Lithuania and has historically been a leading centre of Lithuanian economic, academic, and cultural life. Kaunas was the biggest city and the center of a powiat in Trakai Voivodeship of the Grand Duchy of Lithuania since 1413. During Russian Empire occupation...
– February 2, 1926, Berlin
Berlin
Berlin is the capital city of Germany and is one of the 16 states of Germany. With a population of 3.45 million people, Berlin is Germany's largest city. It is the second most populous city proper and the seventh most populous urban area in the European Union...
) was a cavalry
Cavalry
Cavalry or horsemen were soldiers or warriors who fought mounted on horseback. Cavalry were historically the third oldest and the most mobile of the combat arms...
general of the Imperial Russian Army
Imperial Russian Army
The Imperial Russian Army was the land armed force of the Russian Empire, active from around 1721 to the Russian Revolution of 1917. In the early 1850s, the Russian army consisted of around 938,731 regular soldiers and 245,850 irregulars . Until the time of military reform of Dmitry Milyutin in...
(1906) who served as the Chief of the General Staff
General Staff
A military staff, often referred to as General Staff, Army Staff, Navy Staff or Air Staff within the individual services, is a group of officers and enlisted personnel that provides a bi-directional flow of information between a commanding officer and subordinate military units...
in 1908–09 and the Minister of War until 1915, when he was ousted from office amid allegations of failure to provide necessary armaments and munitions.

After the war, on the invitation of General Mikhail Dragomirov, Chief of the General Staff Academy, he joined the staff of that institution, and lectured as well at the Nicholas Cavalry School, the Corps of Pages
Page Corps
Page Corps was a military academy in Imperial Russia, which prepared sons of the nobility and of senior officers for military service....
and the Mikhail Artillery School.

In December 1908, he became head of General Staff
General Staff
A military staff, often referred to as General Staff, Army Staff, Navy Staff or Air Staff within the individual services, is a group of officers and enlisted personnel that provides a bi-directional flow of information between a commanding officer and subordinate military units...
and, in March 1909, Minister of War. Some regard Vladimir Sukhomlinov as responsible for the military stagnation of 1905–1912, which resulted in unpreparedness of the Russian Army
Imperial Russian Army
The Imperial Russian Army was the land armed force of the Russian Empire, active from around 1721 to the Russian Revolution of 1917. In the early 1850s, the Russian army consisted of around 938,731 regular soldiers and 245,850 irregulars . Until the time of military reform of Dmitry Milyutin in...
at the outbreak of World War I
World War I
World War I , which was predominantly called the World War or the Great War from its occurrence until 1939, and the First World War or World War I thereafter, was a major war centred in Europe that began on 28 July 1914 and lasted until 11 November 1918...
. On the other hand, in Bayonets Before Bullets, Bruce W. Menning asserts that "There was no doubt that he remained committed to building Russia's defensive and offensive military power.... Thanks to Sukhomlinov's reforms, the peacetime strength of the Imperial Russian Army on the eve of World War I reached 1,423,000 officers and men." Though he has some criticism for the Minister, Menning credits him with simplifying and modernizing the structure of the Russian army corps, including the addition of a six-plane detachment to each.

Norman Stone maintains that Sukhomlinov had "an extremely bad press" due to his autocratic style and accusations of corruption made by his enemies in the Duma
Duma
A Duma is any of various representative assemblies in modern Russia and Russian history. The State Duma in the Russian Empire and Russian Federation corresponds to the lower house of the parliament. Simply it is a form of Russian governmental institution, that was formed during the reign of the...
and the army. The effect of the allegations against him is that "Sukhomlinov, as a sort of uniformed Rasputin, belongs to the demonology of 1917. But the case against him is far from watertight." Stone details his position as leader of informal group of "praetorians" in the high ranks of the army, professional soldiers, often from lower- and middle-class backgrounds, with experience in and loyalty to the infantry. As such, he and his allies were opposed by what Stone calls the "patrician" faction, upper-class officers owing less of their status to military service, who tended to favor the cavalry and artillery (especially fortress artillery). Stone regards the continued standoff between the two factions as the work of the Czar
Nicholas II of Russia
Nicholas II was the last Emperor of Russia, Grand Prince of Finland, and titular King of Poland. His official short title was Nicholas II, Emperor and Autocrat of All the Russias and he is known as Saint Nicholas the Passion-Bearer by the Russian Orthodox Church.Nicholas II ruled from 1894 until...
, who played the two sides off against one another as a means of preserving his freedom of action. In any case, Sukhomlinov did try, with some success, to direct resources away from the static fortifications which would prove less useful in the coming war, to the infantry and mobile artillery. His failure to achieve more Stone blames on problems of Russian development economics, and the resistance of the supposedly "technocratic" patrician faction.

As Minister of War, Sukhomlinov was never trusted by the Army Committee of the Duma
State Duma of the Russian Empire
The State Duma of the Russian Empire was a legislative assembly in the late Russian Empire, which met in the Taurida Palace in St. Petersburg. It was convened four times between 1906 and the collapse of the Empire in 1917.-History:...
, led by Alexander Guchkov
Alexander Guchkov
Alexander Ivanovich Guchkov was a Russian politician, Chairman of the Duma and Minister of War in the Russian Provisional Government.-Early years:...
. Disagreement between the Minister and his assistant, General Alexei Polivanov
Alexei Polivanov
Alexei Andreyevich Polivanov was a Russian military figure, infantry general . He served as Russia's Minister of War from June 1915 until his Tsarina Alexandra forced his removal from office in March 1916....
, culminated in 1912 in the dismissal of Polivanov, and his replacement by General Vernander.

Despite Sukhomlinov's reforms (or perhaps because of his inefficacy and resistance to change, as some assert), the opening phase of the First World War was very bad for Russia. After several defeats of the Russian Army during the first year of war, Vladimir Sukhomlinov was relieved of his post in June 1915.

In March 1916, he was arrested on charges of abuse of power and treason
Treason
In law, treason is the crime that covers some of the more extreme acts against one's sovereign or nation. Historically, treason also covered the murder of specific social superiors, such as the murder of a husband by his wife. Treason against the king was known as high treason and treason against a...
, after some of his close associates had been convicted for espionage
Espionage
Espionage or spying involves an individual obtaining information that is considered secret or confidential without the permission of the holder of the information. Espionage is inherently clandestine, lest the legitimate holder of the information change plans or take other countermeasures once it...
on behalf of Germany
Germany
Germany , officially the Federal Republic of Germany , is a federal parliamentary republic in Europe. The country consists of 16 states while the capital and largest city is Berlin. Germany covers an area of 357,021 km2 and has a largely temperate seasonal climate...
(S. Myasoyedov, A. Altschuller, V. Dumbadze, and others). After six months in custody, Vladimir Sukhomlinov was placed under house arrest
House arrest
In justice and law, house arrest is a measure by which a person is confined by the authorities to his or her residence. Travel is usually restricted, if allowed at all...
and then once again arrested after the February Revolution of 1917
February Revolution
The February Revolution of 1917 was the first of two revolutions in Russia in 1917. Centered around the then capital Petrograd in March . Its immediate result was the abdication of Tsar Nicholas II, the end of the Romanov dynasty, and the end of the Russian Empire...
. Trial took place in August and September of 1917, he was sentenced to open-ended katorga
Katorga
Katorga was a system of penal servitude of the prison farm type in Tsarist Russia...
on charges of leaving the army unprepared for the Great War.

Sukhomlinov was then sent to a fortress to serve his sentence. On May 1 of 1918, he was released from prison on reaching 70 years of age. Soon, he emigrated to Finland
Finland
Finland , officially the Republic of Finland, is a Nordic country situated in the Fennoscandian region of Northern Europe. It is bordered by Sweden in the west, Norway in the north and Russia in the east, while Estonia lies to its south across the Gulf of Finland.Around 5.4 million people reside...
and then to Germany
Germany
Germany , officially the Federal Republic of Germany , is a federal parliamentary republic in Europe. The country consists of 16 states while the capital and largest city is Berlin. Germany covers an area of 357,021 km2 and has a largely temperate seasonal climate...
. His memoir
Memoir
A memoir , is a literary genre, forming a subclass of autobiography – although the terms 'memoir' and 'autobiography' are almost interchangeable. Memoir is autobiographical writing, but not all autobiographical writing follows the criteria for memoir set out below...
s appeared in 1924.