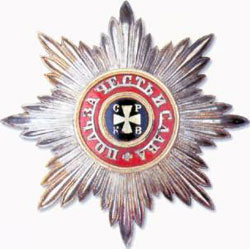 The Cross of Saint Vladimir (Russian
Russian language
Russian is a Slavic language used primarily in Russia, Belarus, Uzbekistan, Kazakhstan, Tajikistan and Kyrgyzstan. It is an unofficial but widely spoken language in Ukraine, Moldova, Latvia, Turkmenistan and Estonia and, to a lesser extent, the other countries that were once constituent republics...
: Орден Святого Владимира) was an Imperial Russia
Russia
Russia or , officially known as both Russia and the Russian Federation , is a country in northern Eurasia. It is a federal semi-presidential republic, comprising 83 federal subjects...
n Order established in 1782 by Empress Catherine II in memory of the deeds of Saint Vladimir, the Grand Prince and the Baptizer of the Kievan Rus.

The order had four degrees and was awarded for continuous civil and military service. The color of the order ribbon is red with a black border.

First class of the order - A red cross with black and golden borders. The badge of the Order depended from a sash worn over the right shoulder, and a gold-and-silver eight-rayed star was fastened on the left chest.

Second class - The red cross on the neck and the star on the left chest.

Third class - The red cross of a smaller size on the neck.

Fourth class - The same on the left chest.

Badge: A red enamelled
Vitreous enamel
Vitreous enamel, also porcelain enamel in U.S. English, is a material made by fusing powdered glass to a substrate by firing, usually between 750 and 850 °C...
cross pattée
Cross pattée
A cross pattée is a type of cross which has arms narrow at the centre, and broader at the perimeter. An early English example from the start of the age of heraldry proper A cross pattée (or "cross patty", known also as "cross formée/formy") is a type of cross which has arms narrow at the...
with black enamelled borders, and a black enamelled central disc bearing a crowned red and ermine
Ermine (heraldry)
Ermine is a heraldic fur representing the winter coat of the stoat . Many skins would be sewn together to make a luxurious garment, producing a pattern of small black spots on a white field...
mantle with the monogram
Monogram
A monogram is a motif made by overlapping or combining two or more letters or other graphemes to form one symbol. Monograms are often made by combining the initials of an individual or a company, used as recognizable symbols or logos. A series of uncombined initials is properly referred to as a...
of St. Vladimir. Worn on a sash
Sash
A sash is a cloth belt used to hold a robe together, and is usually tied about the waist. The Japanese equivalent of a sash, obi, serves to hold a kimono or yukata together. Decorative sashes may pass from the shoulder to the hip rather than around the waist...
by the first degree, on a necklet
Neck order
A neck order is a type of decoration which is designed to be worn and displayed around a person's neck, rather than hung from the chest as is the standard practice for displaying most decorations....
by the second and third degrees, and on a chest ribbon
Ribbon
A ribbon or riband is a thin band of material, typically cloth but also plastic or sometimes metal, used primarily for binding and tying. Cloth ribbons, most commonly silk, are often used in connection with clothing, but are also applied for innumerable useful, ornamental and symbolic purposes...
by the fourth degree.

Star: A four-pointed star superimposed upon a four-pointed gold star, with a golden cross pattée and the letters "CPKB" between the arms of the cross on a black enamel background at the centre surrounded by the motto of the order "Benefit, Honour and Glory" (Pol'za, chest' i slava). Worn on the left chest by the first and second degrees. This motto was transferred to present-day star of the Order of Merit for the Fatherland
Order of Merit for the Fatherland
The Order of Merit for the Fatherland was instituted on 2 March 1994 by Presidential Decree. The statutes describe it as a decoration for merit, not an order of knights....
, which was established in 1992 by President Boris Yeltsin
Boris Yeltsin
Boris Nikolayevich Yeltsin was the first President of the Russian Federation, serving from 1991 to 1999.Originally a supporter of Mikhail Gorbachev, Yeltsin emerged under the perestroika reforms as one of Gorbachev's most powerful political opponents. On 29 May 1990 he was elected the chairman of...
and is today the second highest ranking decoration of that country.

In 1957, in commemoration of the 40th anniversary of the Patriarchy restoration in Russia, the order was revived by the Russian Orthodox Church
Russian Orthodox Church
The Russian Orthodox Church or, alternatively, the Moscow Patriarchate The ROC is often said to be the largest of the Eastern Orthodox churches in the world; including all the autocephalous churches under its umbrella, its adherents number over 150 million worldwide—about half of the 300 million...
. The order is to be awarded to priests and nuns of Orthodox church for their service to Soviet Union
Soviet Union
The Soviet Union , officially the Union of Soviet Socialist Republics , was a constitutionally socialist state that existed in Eurasia between 1922 and 1991....
and later Russia. There are three degrees of the order.

People who had been awarded with the St.Vladimir Order for military merits bore it with a special fold on the ribbon - "with a bow".

There was a certain hierarchy of Russian Orders. According to this, the St. Vladimir Order, 1st Class was the second one (the first - St. George Order) by its significance.

According to the Russian Law about the Nobility, people who were awarded with the St. Vladimir Order (each class) had had the rights of hereditary nobility until the Emperor's Decree of 1900 was issued. After this only three first classes of the Order gave such a right.

Mikhail Lermontov
Mikhail Lermontov
Mikhail Yuryevich Lermontov , a Russian Romantic writer, poet and painter, sometimes called "the poet of the Caucasus", became the most important Russian poet after Alexander Pushkin's death in 1837. Lermontov is considered the supreme poet of Russian literature alongside Pushkin and the greatest...
was awarded the Fourth Class of the Order but never received it, as his name was removed from the final list of recipients by Czar Nicholas I
Nicholas I of Russia
Nicholas I , was the Emperor of Russia from 1825 until 1855, known as one of the most reactionary of the Russian monarchs. On the eve of his death, the Russian Empire reached its historical zenith spanning over 20 million square kilometers...
, who harbored a strong dislike for the contumacious poet.
The source of this article is wikipedia, the free encyclopedia.  The text of this article is licensed under the GFDL.