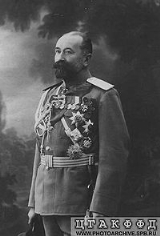 Encyclopedia
Alexei Andreyevich Polivanov (March 16, 1855 – September 25, 1920) was a Russia
Russia
Russia or , officially known as both Russia and the Russian Federation , is a country in northern Eurasia. It is a federal semi-presidential republic, comprising 83 federal subjects...
n military figure, infantry general (1915). He served as Russia's Minister of War from June 1915 until his Tsarina Alexandra forced his removal from office in March 1916.

Following the disastrous defeat in the 1904–1905 Russo-Japanese War
Russo-Japanese War
The Russo-Japanese War was "the first great war of the 20th century." It grew out of rival imperial ambitions of the Russian Empire and Japanese Empire over Manchuria and Korea...
, he was appointed assistant Minister of War and quickly recommended extensive political and military reforms. However, he was dismissed in 1912 because of his cooperation with liberal factions within the Duma.

Polivanov was appointed to the State Council in 1912 and served until June 1915 when he replaced Vladimir Sukhomlinov
Vladimir Sukhomlinov
Vladimir Aleksandrovich Sukhomlinov was a cavalry general of the Imperial Russian Army who served as the Chief of the General Staff in 1908–09 and the Minister of War until 1915, when he was ousted from office amid allegations of failure to provide necessary armaments and munitions.Vladimir...
as Minister of War; and at once started transforming the Russian army's training system and tried with limited success to improve its supply and communications systems.

However in September 1915 he became aware of Tsar Nicholas II
Nicholas II of Russia
Nicholas II was the last Emperor of Russia, Grand Prince of Finland, and titular King of Poland. His official short title was Nicholas II, Emperor and Autocrat of All the Russias and he is known as Saint Nicholas the Passion-Bearer by the Russian Orthodox Church.Nicholas II ruled from 1894 until...
's plan to replace Grand Duke Nikolai as commander-in-chief of the army and personally lead the Russian armies at the front, and made strenuous efforts to persuade him not to.

This helped alienate Polivanov from the Tsarina, who then conspired to have him sacked, and achieved this when Tsar Nicholas dismissed him March 1916.

Following the Russian Revolution
October Revolution
The October Revolution , also known as the Great October Socialist Revolution , Red October, the October Uprising or the Bolshevik Revolution, was a political revolution and a part of the Russian Revolution of 1917...
, Polivanov joined the Red Army in February 1920, participating in the Soviet-Polish peace talks
Peace of Riga
The Peace of Riga, also known as the Treaty of Riga; was signed in Riga on 18 March 1921, between Poland, Soviet Russia and Soviet Ukraine. The treaty ended the Polish-Soviet War....
in Riga
Riga
Riga is the capital and largest city of Latvia. With 702,891 inhabitants Riga is the largest city of the Baltic states, one of the largest cities in Northern Europe and home to more than one third of Latvia's population. The city is an important seaport and a major industrial, commercial,...
later that year but died during the talks of typhus
Typhus
Epidemic typhus is a form of typhus so named because the disease often causes epidemics following wars and natural disasters...
.