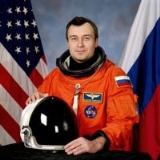 Encyclopedia
Vladimir Nikolayevich Dezhurov is a former cosmonaut who resides in Star City, Moscow. He is a veteran of two spaceflights, to the Mir
Mir
Mir was a space station operated in low Earth orbit from 1986 to 2001, at first by the Soviet Union and then by Russia. Assembled in orbit from 1986 to 1996, Mir was the first modular space station and had a greater mass than that of any previous spacecraft, holding the record for the...
and International
International Space Station
The International Space Station is a habitable, artificial satellite in low Earth orbit. The ISS follows the Salyut, Almaz, Cosmos, Skylab, and Mir space stations, as the 11th space station launched, not including the Genesis I and II prototypes...
Space Stations. During his career, Duzhurov also conducted nine spacewalks before his retirement on July 12, 2004.

Dezhurov was born on July 30, 1962 in the settlement of Yavas
Yavas
Yavas is an urban locality in Zubovo-Polyansky District of the Republic of Mordovia, Russia. Population: It is a birth place of the Soviet/Russian cosmonaut Vladimir Dezhurov ....
, Zubovo-Polyansky District
Zubovo-Polyansky District
Zubovo-Polyansky District is an administrative and municipal district , one of the fourteen in the Republic of Mordovia, Russia. Its administrative center is the urban locality of Zubova Polyana. District's population: 65,735 ; Population of Zubova Polyana accounts for 17.4% of the district's...
, Mordovia
Mordovia
The Republic of Mordovia , also known as Mordvinia, is a federal subject of Russia . Its capital is the city of Saransk. Population: -Geography:The republic is located in the eastern part of the East European Plain of Russia...
, Russia
Russia
Russia or , officially known as both Russia and the Russian Federation , is a country in northern Eurasia. It is a federal semi-presidential republic, comprising 83 federal subjects...
. He is married to Elena Valentinovna Dezhurova (née Suprina). They have two daughters, Anna, born in 1983, and Svetlana, born in 1987. His father, Nikolai Serafimovich Dezhurov and mother, Anna Vasilevna Dezhurova reside in Yavas settlement, Zubovo-Polyansk district, Mordovia, Russia.

Dezhurov attended and graduated from the S.I. Gritsevits Kharkov Higher Military Aviation School in 1983 with a pilot engineer’s diploma.

After graduating, Dezhurov served as a pilot and senior pilot in the Russian Air Force.

In March 1994, Dezhurov began flight training as commander of the prime crew of the Mir
Mir
Mir was a space station operated in low Earth orbit from 1986 to 2001, at first by the Soviet Union and then by Russia. Assembled in orbit from 1986 to 1996, Mir was the first modular space station and had a greater mass than that of any previous spacecraft, holding the record for the...
-18 mission. The crew was launched from the Baikonur Cosmodrome
Baikonur Cosmodrome
The Baikonur Cosmodrome , also called Tyuratam, is the world's first and largest operational space launch facility. It is located in the desert steppe of Kazakhstan, about east of the Aral Sea, north of the Syr Darya river, near Tyuratam railway station, at 90 meters above sea level...
in Kazakhstan
Kazakhstan
Kazakhstan , officially the Republic of Kazakhstan, is a transcontinental country in Central Asia and Eastern Europe. Ranked as the ninth largest country in the world, it is also the world's largest landlocked country; its territory of is greater than Western Europe...
on March 14, 1995 aboard the Soyuz TM-21
Soyuz TM-21
Soyuz TM-21 was Soyuz mission, a human spaceflight mission transporting personnel to the Russian space station Mir. Part of the US/Russian Shuttle-Mir Program, the mission launched from Baikonur Cosmodrome, atop a Soyuz-U2 carrier rocket, at 06:11:34 UTC on March 14, 1995...
spacecraft. Following a two day solo flight, the Soyuz spacecraft docked with the Mir on March 16. Dezhurov served as the Mir E)-18 commander. There were several technical problems during this mission. The crew also performed life science experiments. Following a 115 day flight, the mission concluded with landing at the Kennedy Space Center
Kennedy Space Center
The John F. Kennedy Space Center is the NASA installation that has been the launch site for every United States human space flight since 1968. Although such flights are currently on hiatus, KSC continues to manage and operate unmanned rocket launch facilities for America's civilian space program...
in Florida
Florida
Florida is a state in the southeastern United States, located on the nation's Atlantic and Gulf coasts. It is bordered to the west by the Gulf of Mexico, to the north by Alabama and Georgia and to the east by the Atlantic Ocean. With a population of 18,801,310 as measured by the 2010 census, it...
, aboard Space Shuttle Atlantis
Space Shuttle Atlantis
The Space Shuttle Atlantis is a retired Space Shuttle orbiter in the Space Shuttle fleet belonging to the National Aeronautics and Space Administration , the spaceflight and space exploration agency of the United States...
on July 7, 1995.

Dezhurov lived and worked aboard the International Space Station
International Space Station
The International Space Station is a habitable, artificial satellite in low Earth orbit. The ISS follows the Salyut, Almaz, Cosmos, Skylab, and Mir space stations, as the 11th space station launched, not including the Genesis I and II prototypes...
where he served as a member of the Expedition 3
Expedition 3
Expedition 3 was the third expedition to the International Space Station. Commander Frank Culbertson was the only American crew member, and as such the only American not on Earth during the September 11 terrorist attacks, which the crew photographed and videoed from the ISS.- Crew :- Mission...
crew. carrying Dezhurov and six other crewmembers on STS-105
STS-105
STS-105 was a mission of the Space Shuttle Discovery to the International Space Station, launched from Kennedy Space Center, Florida, 10 August 2001. This mission was Discoverys final mission until STS-114, because Discovery was grounded for a refit, and then all Shuttles were grounded in the wake...
mission blasted off to space from the Kennedy Space Center
Kennedy Space Center
The John F. Kennedy Space Center is the NASA installation that has been the launch site for every United States human space flight since 1968. Although such flights are currently on hiatus, KSC continues to manage and operate unmanned rocket launch facilities for America's civilian space program...
(KSC) on August 10, 2001. The shuttle docked with the ISS on 12 August at 18:41 UTC. Dezhurov spent approximately 4 months aboard the station as a flight engineer. During the long duration mission the Expedition 3 crew enjoyed a unique view of the 2001 Leonid meteor storm. At the end of the stay Expedition 3 crewmembers, Dezhurov, NASA astronaut Frank Culbertson and cosmonaut Mikhail Tyurin
Mikhail Tyurin
Mikhail Vladislavovich Tyurin is a Russian cosmonaut.-Personal data:Michael Tyurin lives in Korolev, a small city outside of Moscow. He was born March 2, 1960, in Kolomna, USSR where his parents still reside. He is married to Tatiana Anatoleyvna Tyurina. They have a daughter, Alexandra, born in...
returned to Earth
Earth
Earth is the third planet from the Sun, and the densest and fifth-largest of the eight planets in the Solar System. It is also the largest of the Solar System's four terrestrial planets...
on board Space Shuttle . Endeavour STS-108
STS-108
STS-108 was a Space Shuttle mission to the International Space Station flown by Space Shuttle Endeavour. Its primary objective was to deliver supplies to and help maintain the ISS....
mission delivered the Expedition 4
Expedition 4
Expedition 4 was the fourth expedition to the International Space Station.-Crew:-Mission parameters:*Perigee: 384 km*Apogee: 396 km*Inclination: 51.6°*Period: 92 min...
crew to the ISS and landed at KSC on December 17, 2001.

During his cosmonaut career, Dezhurov has performed nine spacewalks. During Mir EO-18 long duration mission Dezhurov together with cosmonaut Gennady Strekalov
Gennady Strekalov
Gennadi Mikhailovich Strekalov was an Instructor-Test-Cosmonaut and Department Head at Russian aerospace firm RSC Energia. He has been decorated twice as Hero of the Soviet Union...
conducted five spacewalks. As of June 2010, his nine spacewalks totalling 37 hours and 2 minutes has placed him in the 25th position in the list of astronauts who have the most extra-vehicular activity (EVA) time.

On 12 May 1995, Dezhurov conducted his first career spacewalk. The spacewalk started 04:20:44 UTC and ended at 10:35:16 UTC. He and Strekalov prepared for the arrival of the Spektr
Spektr
Spektr was the fifth module of the Mir Space Station. The module was designed for remote observation of Earth's environment containing atmospheric and surface research equipment...
module and prepared to move Kristall's solar panel. They also practiced work at the Kristall module. The spacewalk lasted 6 hours and 14 minutes.
Dezhurov performed his second career spacewalk on May 17. They moved the solar array to the Kvant-1
Kvant-1
Kvant-1 was the second module of the Soviet space station Mir. It was the first addition to the Mir base block and contained scientific instruments for astrophysical observations and materials science experiments....
module. The spacewalk lasted six hours and 52 minutes.

On May 22, Dezhurov and Strekalov installed the solar array on Kvant-1 and stowed Kristall's other solar array. The excursion out of the Mir Space Station marked Dezhurov's third career spacewalk. The spacewalk started at 00:10:20 UTC and was completed at 05:25:11 UTC. The spacewalk lasted 5 hours and 14 minutes.

On 28 May and June 1, 1995, Dezhurov and Strekolov conducted two spacewalks to prepare Mir to move Kristall and Spektr modules. Dezhurov's fourth and fifth career spacewalks lasted 21 and 23 minutes respectively.

Dezhurov conducted another four spacewalks during the Expedition 3 mission to the ISS. On October 8, 2001, Dezhurov and Tyurin ventured outside of the ISS to mark the 100th spacewalk to be carried out by Russian cosmonauts. The main objective of the spacewalk was to outfit the Pirs Docking Compartment and make connections between that newly arrived compartment and the Zvezda module. The spacewalkers installed a cable that allows space walk radio communications between the two station sections. They also installed handrails on the new compartment and an exterior ladder that will be used to help spacewalkers leave Pirs hatch. Dezhurov and Tyurin also installed a Strela cargo crane onto the station. The spacewalk lasted 4 hours and 58 minutes ending at 19:21 UTC.

On October 15, 2001, Dezhurov performed his seventh career spacewalk. The two spacewalkers returned to space outside the ISS from the Pirs airlock. Dezhurov and Tyurin installed Russian commercial experiments on the exterior of Pirs. Among the experiments is a set of investigations of how various materials react to the space environment over a long time. Called MPAC-SEEDS, the investigation is housed in three briefcase-sized containers. The spacewalk lasted 5 hours and 52 minutes.

On November 12, 2001, Dezhurov conducted his eighth career spacewalk. Dezhurov and NASA astronaut Culbertson connected cables on the exterior of the Pirs Docking Compartment for the Kurs automated docking system. They completed checks of the Strela cargo crane, using one space walker at the end of the crane's boom to simulate a cargo. They also inspected and photographed a small panel of one solar array on the Zvezda Service Module that has one portion of a panel not fully unfolded. The spacewalk was conducted in Russian Orlan spacesuits. It lasted 5 hours and 4 minutes.

On December 3, 2001, Dezhurov conducted his ninth career spacewalk. Dressed in Orlan spacesuits, Tyurin and Dezhurov floated out of the Pirs airlock at 13:20 UTC. Dezhurov and Tyurin used a cutting tool to remove an errant rubber seal that had prevented a Progress resupply ship from firmly docking with the ISS. The two spacewalkers also took pictures of the debris, which was a rubberized seal from the previous cargo ship, and of the docking interface. The spacewalk lasted 2 hours and 46 minutes.
The source of this article is wikipedia, the free encyclopedia.  The text of this article is licensed under the GFDL.