Encyclopedia
Virus classification is the process of naming virus
Virus
A virus is a small infectious agent that can replicate only inside the living cells of organisms. Viruses infect all types of organisms, from animals and plants to bacteria and archaea...
es and placing them into a taxonomic
Alpha taxonomy
Alpha taxonomy is the discipline concerned with finding, describing and naming species of living or fossil organisms. This field is supported by institutions holding collections of these organisms, with relevant data, carefully curated: such institutes include natural history museums, herbaria and...
system. Similar to the classification systems used for cellular organisms
Cell (biology)
The cell is the basic structural and functional unit of all known living organisms. It is the smallest unit of life that is classified as a living thing, and is often called the building block of life. The Alberts text discusses how the "cellular building blocks" move to shape developing embryos....
, virus classification is the subject of ongoing debate and proposals. This is mainly due to the pseudo-living nature of viruses, which are not yet definitively classified as living or non-living. As such, they do not fit neatly into the established biological classification
Biological classification
Biological classification, or scientific classification in biology, is a method to group and categorize organisms by biological type, such as genus or species. Biological classification is part of scientific taxonomy....
system in place for cellular organisms.

Viruses are mainly classified by phenotypic characteristics, such as morphology, nucleic acid
Nucleic acid
Nucleic acids are biological molecules essential for life, and include DNA and RNA . Together with proteins, nucleic acids make up the most important macromolecules; each is found in abundance in all living things, where they function in encoding, transmitting and expressing genetic information...
type, mode of replication, host organism
Host (biology)
In biology, a host is an organism that harbors a parasite, or a mutual or commensal symbiont, typically providing nourishment and shelter. In botany, a host plant is one that supplies food resources and substrate for certain insects or other fauna...
s, and the type of disease
Disease
A disease is an abnormal condition affecting the body of an organism. It is often construed to be a medical condition associated with specific symptoms and signs. It may be caused by external factors, such as infectious disease, or it may be caused by internal dysfunctions, such as autoimmune...
they cause. Currently there are two main schemes used for the classification of viruses: the ICTV
ICTV
ICTV can stand for*International Committee on Taxonomy of Viruses, a taxonomic organisation and the nomenclature code it produces*ICTV , a content distribution network for delivering the web-media experience through television...
system and Baltimore classification
Baltimore classification
The Baltimore classification, developed by David Baltimore, is a virus classification system that groups viruses into families, depending on their type of genome and their method of replication....
system, which places viruses into one of seven groups. Accompanying this broad method of classification are specific naming conventions and further classification guidelines set out by the International Committee on Taxonomy of Viruses
International Committee on Taxonomy of Viruses
The International Committee on Taxonomy of Viruses is a committee which authorizes and organizes the taxonomic classification of viruses. They have developed a universal taxonomic scheme for viruses and aim to describe all the viruses of living organisms. Members of the committee are considered to...
.

Species form the basis for any biological classification system. The ICTV had adopted the principle that a virus species is a polythetic class of viruses that constitutes a replicating lineage and occupies a particular ecological niche.

Order
Order (biology)
In scientific classification used in biology, the order is# a taxonomic rank used in the classification of organisms. Other well-known ranks are life, domain, kingdom, phylum, class, family, genus, and species, with order fitting in between class and family...
(-virales)

Family
Family (biology)
In biological classification, family is* a taxonomic rank. Other well-known ranks are life, domain, kingdom, phylum, class, order, genus, and species, with family fitting between order and genus. As for the other well-known ranks, there is the option of an immediately lower rank, indicated by the...
(-viridae)

Genus
Genus
In biology, a genus is a low-level taxonomic rank used in the biological classification of living and fossil organisms, which is an example of definition by genus and differentia...
(-virus)

Species
Species
In biology, a species is one of the basic units of biological classification and a taxonomic rank. A species is often defined as a group of organisms capable of interbreeding and producing fertile offspring. While in many cases this definition is adequate, more precise or differing measures are...

So far, six orders have been established by the ICTV: the Caudovirales, Herpesvirales, Mononegavirales, Nidovirales, Picornavirales, and Tymovirales. These orders span viruses with varying host ranges. Caudovirales
Caudovirales
The Caudovirales are an order of viruses also known as the tailed bacteriophages. Under the Baltimore classification scheme, the Caudovirales are group I viruses as they have double stranded DNA genomes, which can be anywhere from 18,000 base pairs to 500,000 base pairs in length...
are tailed dsDNA (group I) bacteriophages, Herpesvirales contains large eukaryotic dsDNA viruses, Mononegavirales
Mononegavirales
The order Mononegavirales is the taxonomic home of numerous related viruses. Members of the order that are commonly known are, for instance, Ebola virus, human respiratory syncytial virus, measles virus, mumps virus, Nipah virus, and rabies virus. All of these viruses cause significant disease in...
includes non-segmented (-) strand ssRNA (Group V) plant and animal viruses, Nidovirales
Nidovirales
The Nidovirales are an order of viruses with animal hosts. It includes the families Coronaviridae, Arterivirus and Roniviridae.-Virology:...
is composed of (+) strand ssRNA (Group IV) viruses with vertebrate hosts, Picornavirales contains small (+) strand ssRNA viruses that infect a variety of plant, insect, and animal hosts, and Tymovirales contains monopartite ssRNA viruses that infect plants. Other variations occur between the orders, for example, Nidovirales are isolated for their differentiation in expressing structural and non-structural proteins separately. However, this system of nomenclature differs from other taxonomic codes on several points. A minor point is that names of orders and families are italicized, as in the ICBN. Most notably, species names generally take the form of [Disease] virus. The establishment of an order is based on the inference that the virus families contained within a single order have most likely evolved from a common ancestor. The majority of virus families remain unplaced. Currently (2009) 6 orders, 87 families, 19 subfamilies, 348 genera, and 2,288 species of virus have been defined. 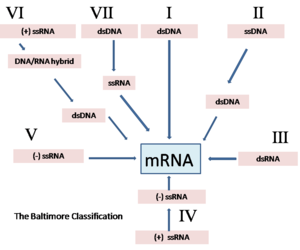 Baltimore classification (first defined in 1971) is a classification system that places viruses into one of seven groups depending on a combination of their nucleic acid
Nucleic acid
Nucleic acids are biological molecules essential for life, and include DNA and RNA . Together with proteins, nucleic acids make up the most important macromolecules; each is found in abundance in all living things, where they function in encoding, transmitting and expressing genetic information...
(DNA
DNA
Deoxyribonucleic acid is a nucleic acid that contains the genetic instructions used in the development and functioning of all known living organisms . The DNA segments that carry this genetic information are called genes, but other DNA sequences have structural purposes, or are involved in...
or RNA
RNA
Ribonucleic acid , or RNA, is one of the three major macromolecules that are essential for all known forms of life....
), strandedness (single-stranded or double-stranded), Sense
Sense (molecular biology)
In molecular biology and genetics, sense is a concept used to compare the polarity of nucleic acid molecules, such as DNA or RNA, to other nucleic acid molecules...
, and method of replication
Viral replication
Viral replication is the term used by virologists to describe the formation of biological viruses during the infection process in the target host cells. Viruses must first get into the cell before viral replication can occur. From the perspective of the virus, the purpose of viral replication is...
. Named after David Baltimore
David Baltimore
David Baltimore is an American biologist, university administrator, and Nobel laureate in Physiology or Medicine. He served as president of the California Institute of Technology from 1997 to 2006, and is currently the Robert A. Millikan Professor of Biology at Caltech...
, a Nobel Prize
Nobel Prize
The Nobel Prizes are annual international awards bestowed by Scandinavian committees in recognition of cultural and scientific advances. The will of the Swedish chemist Alfred Nobel, the inventor of dynamite, established the prizes in 1895...
-winning biologist, these groups are designated by Roman numerals
Roman numerals
The numeral system of ancient Rome, or Roman numerals, uses combinations of letters from the Latin alphabet to signify values. The numbers 1 to 10 can be expressed in Roman numerals as:...
and discriminate viruses depending on their mode of replication, and genome type. Other classifications are determined by the disease caused by the virus or its morphology, neither of which are satisfactory due to different viruses either causing the same disease or looking very similar. In addition, viral structures are often difficult to determine under the microscope. Classifying viruses according to their genome
Genome
In modern molecular biology and genetics, the genome is the entirety of an organism's hereditary information. It is encoded either in DNA or, for many types of virus, in RNA. The genome includes both the genes and the non-coding sequences of the DNA/RNA....
means that those in a given category will all behave in a similar fashion, offering some indication of how to proceed with further research. Viruses can be placed in one of the seven following groups:

The LHT System of Virus Classification is based on chemical and physical characters like nucleic acid (DNA or RNA), Symmetry (Helical or Icosahedral or Complex), presence of envelope, diameter of capsid
Capsid
A capsid is the protein shell of a virus. It consists of several oligomeric structural subunits made of protein called protomers. The observable 3-dimensional morphological subunits, which may or may not correspond to individual proteins, are called capsomeres. The capsid encloses the genetic...
, number of capsomers. This classification was approved by the Provisional Committee on Nomenclature of Virus (PNVC) of the International Association of Microbiological Societies (1962). It is as follows:

The following agents are smaller than viruses but have some of their properties.

Satellites depend on co-infection of a host cell with a helper virus
Helper virus
A helper virus is a virus used when producing copies of a helper dependent viral vector which does not have the ability to replicate on its own. The helper virus is used to coinfect cells alongside the viral vector and provides the necessary enzymes for replication of the genome of the viral vector....
for productive multiplication. Their nucleic acids have substantially distinct nucleotide sequences from either their helper virus or host. When a satellite subviral agent encodes the coat protein in which it is encapsulated, it is then called a satellite virus.

Prion
Prion
A prion is an infectious agent composed of protein in a misfolded form. This is in contrast to all other known infectious agents which must contain nucleic acids . The word prion, coined in 1982 by Stanley B. Prusiner, is a portmanteau derived from the words protein and infection...
s, named for their description as "proteinaceous and infectious particles", lack any detectable (as of 2002) nucleic acids or virus-like particles. They resist inactivation procedures that normally affect nucleic acids.