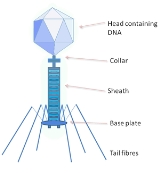 Overview
A bacteriophage is any one of a number of viruses that infect
Infection
An infection is the colonization of a host organism by parasite species. Infecting parasites seek to use the host's resources to reproduce, often resulting in disease...
bacteria. They do this by injecting genetic material, which they carry enclosed in an outer protein
Protein
Proteins are biochemical compounds consisting of one or more polypeptides typically folded into a globular or fibrous form, facilitating a biological function. A polypeptide is a single linear polymer chain of amino acids bonded together by peptide bonds between the carboxyl and amino groups of...
capsid
Capsid
A capsid is the protein shell of a virus. It consists of several oligomeric structural subunits made of protein called protomers. The observable 3-dimensional morphological subunits, which may or may not correspond to individual proteins, are called capsomeres. The capsid encloses the genetic...
. The genetic material can be ssRNA, dsRNA, ssDNA, or dsDNA
DNA
Deoxyribonucleic acid is a nucleic acid that contains the genetic instructions used in the development and functioning of all known living organisms . The DNA segments that carry this genetic information are called genes, but other DNA sequences have structural purposes, or are involved in...
('ss-' or 'ds-' prefix denotes single-strand or double-strand) along with either circular or linear arrangement.

Bacteriophages are among the most common and diverse entities in the biosphere
Biosphere
The biosphere is the global sum of all ecosystems. It can also be called the zone of life on Earth, a closed and self-regulating system...
.

What is the organisation of a bacteriophage