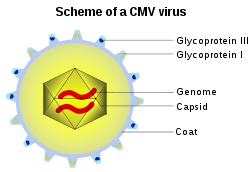 For the leaf bug, see Miridae
Miridae
The large and diverse insect family Miridae contains the plant bugs, leaf bugs, and grass bugs, and may also be known as capsid bugs. It is the largest family of true bugs belonging to the suborder Heteroptera, with over 10,000 known species and new ones constantly being described...
.

A capsid is the protein shell of a virus. It consists of several oligomer
Oligomer
In chemistry, an oligomer is a molecule that consists of a few monomer units , in contrast to a polymer that, at least in principle, consists of an unlimited number of monomers. Dimers, trimers, and tetramers are oligomers. Many oils are oligomeric, such as liquid paraffin...
ic structural subunits made of protein
Protein
Proteins are biochemical compounds consisting of one or more polypeptides typically folded into a globular or fibrous form, facilitating a biological function. A polypeptide is a single linear polymer chain of amino acids bonded together by peptide bonds between the carboxyl and amino groups of...
called protomer
Protomer
In structural biology, a protomer is the structural unit of an oligomeric protein. A protomer can be a protein subunit or several different subunits, that assemble in a defined stoichiometry to form an oligomer. The protomer is the smallest subset of different subunits that form the oligomer. The...
s. The observable 3-dimensional morphological subunits, which may or may not correspond to individual proteins, are called capsomere
Capsomere
The capsomere is a basic subunit of the capsid, an outer covering of protein that protects the genetic material of a virus. Capsomeres self-assemble to form the capsid....
s. The capsid encloses the genetic material of the virus.

Capsids are broadly classified according to their structure. The majority of viruses have capsids with either helical or icosahedral  structure. Some viruses, such as bacteriophages, have developed more complicated structures due to constraints of elasticity and electrostatics. The icosahedral shape, which has 20 equilateral triangular faces, approximates a sphere
Sphere
A sphere is a perfectly round geometrical object in three-dimensional space, such as the shape of a round ball. Like a circle in two dimensions, a perfect sphere is completely symmetrical around its center, with all points on the surface lying the same distance r from the center point...
, while the helical shape is cylindrical. The capsid faces may consist of one or more proteins. For example, the foot-and-mouth disease
Foot-and-mouth disease
Foot-and-mouth disease or hoof-and-mouth disease is an infectious and sometimes fatal viral disease that affects cloven-hoofed animals, including domestic and wild bovids...
virus capsid has faces consisting of three proteins named VP1–3. 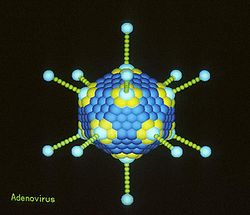 Some viruses are enveloped, meaning that the capsid is coated with a lipid membrane known as the viral envelope
Viral envelope
Many viruses have viral envelopes covering their protein capsids. The envelopes typically are derived from portions of the host cell membranes , but include some viral glycoproteins. Functionally, viral envelopes are used to help viruses enter host cells...
. The envelope is acquired by the capsid from an intracellular membrane in the virus' host; some examples would include the inner nuclear membrane, the golgi
Golgi
Golgi may refer to:*Camillo Golgi , Italian physician and scientist after which the following terms are named:**Golgi apparatus , an organelle in the eukaryotic cell...
membrane, and the cell's outer membrane
Cell membrane
The cell membrane or plasma membrane is a biological membrane that separates the interior of all cells from the outside environment. The cell membrane is selectively permeable to ions and organic molecules and controls the movement of substances in and out of cells. It basically protects the cell...
.

Once the virus has infected the cell, it will start replicating itself, using the mechanisms of the infected host cell. During this process, new capsid subunits are synthesized according to the genetic material of the virus, using the protein biosynthesis
Protein biosynthesis
Protein biosynthesis is the process in which cells build or manufacture proteins. The term is sometimes used to refer only to protein translation but more often it refers to a multi-step process, beginning with amino acid synthesis and transcription of nuclear DNA into messenger RNA, which is then...
mechanism of the cell. During the assembly process, a portal subunit is assembled at one vertex of the capsid. Through this portal, viral DNA
DNA
Deoxyribonucleic acid is a nucleic acid that contains the genetic instructions used in the development and functioning of all known living organisms . The DNA segments that carry this genetic information are called genes, but other DNA sequences have structural purposes, or are involved in...
or RNA
RNA
Ribonucleic acid , or RNA, is one of the three major macromolecules that are essential for all known forms of life....
is transported into the capsid. The structure and assembly of the herpes virus capsid portal protein has been imaged via cryo-electron microscopy
Cryo-electron microscopy
Cryo-electron microscopy , or electron cryomicroscopy, is a form of transmission electron microscopy where the sample is studied at cryogenic temperatures...
.

It is this capsid or protein shell that makes protective vaccines a possibility. Structural analyses of major capsid protein (MCP) architectures have been used to categorise viruses into families. For example, the bacteriophage PRD1, Paramecium bursaria Chlorella algal virus, and mammalian adenovirus
Adenoviridae
Adenoviruses are medium-sized , nonenveloped icosahedral viruses composed of a nucleocapsid and a double-stranded linear DNA genome...
have been placed in the same family.

Icosahedral virus capsids are typically assigned a T-number to describe the relation between the number of pentagons and hexagons i.e. their quasi-symmetry in the capsid shell. The T-number idea was originally developed to explain the quasi-symmetry by Caspar and Klug in 1962.

For example, a purely icosahedral virus has a T-number of 1 (usually written, T=1) and a truncated icosahedron
Truncated icosahedron
In geometry, the truncated icosahedron is an Archimedean solid, one of thirteen convex isogonal nonprismatic solids whose faces are two or more types of regular polygons.It has 12 regular pentagonal faces, 20 regular hexagonal faces, 60 vertices and 90 edges....
is assigned T=3. The T-number is calculated by (1) applying a grid to the surface of the virus with coordinates h and k, (2) counting the number of steps between successive pentagons on the virus surface, (3) applying the formula:

and h and k are the distances between the successive pentagons on the virus surface for each axis (see figure on right). The larger the T-number the more hexagons are present relative to the pentagons.