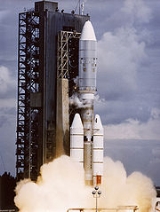 Encyclopedia
The Titan IIIE or Titan 3E, also known as Titan III-Centaur was an American
United States
The United States of America is a federal constitutional republic comprising fifty states and a federal district...
expendable launch system
Expendable launch system
An expendable launch system is a launch system that uses an expendable launch vehicle to carry a payload into space. The vehicles used in expendable launch systems are designed to be used only once , and their components are not recovered for re-use after launch...
, launched seven times between 1974 and 1977. It was used to launch several high-profile NASA
NASA
The National Aeronautics and Space Administration is the agency of the United States government that is responsible for the nation's civilian space program and for aeronautics and aerospace research...
missions, including the Voyager
Voyager program
The Voyager program is a U.S program that launched two unmanned space missions, scientific probes Voyager 1 and Voyager 2. They were launched in 1977 to take advantage of a favorable planetary alignment of the late 1970s...
and Viking
Viking program
The Viking program consisted of a pair of American space probes sent to Mars, Viking 1 and Viking 2. Each spacecraft was composed of two main parts, an orbiter designed to photograph the surface of Mars from orbit, and a lander designed to study the planet from the surface...
planetary probes, and the joint West German
West Germany
West Germany is the common English, but not official, name for the Federal Republic of Germany or FRG in the period between its creation in May 1949 to German reunification on 3 October 1990....
-US Helios
Helios probes
Helios-A and Helios-B , were a pair of probes launched into heliocentric orbit for the purpose of studying solar processes. A joint venture of the Federal Republic of Germany and NASA, the probes were launched from the John F. Kennedy Space Center at Cape Canaveral, Florida, on Dec. 10, 1974,...
spacecraft.

The Titan IIIE was a three stage rocket, derived from the Titan IIID
Titan IIID
The Titan IIID or Titan 3D was an American expendable launch system, launched twenty two times with KH-9 and KH-11 satellites between 1971 and 1982...
, but with the addition of a Centaur-D
Centaur (rocket stage)
Centaur is a rocket stage designed for use as the upper stage of space launch vehicles. Centaur boosts its satellite payload to geosynchronous orbit or, in the case of an interplanetary space probe, to or near to escape velocity...
upper stage to increase performance. It was the first Titan rocket to use a Centaur upper stage, which would later be used on the Titan IV
Titan IV
The Titan IV family of space boosters were used by the U.S. Air Force. They were launched from Cape Canaveral Air Force Station, Florida, and Vandenberg Air Force Base, California. At the time of its introduction, the Titan IV was the "largest unmanned space booster used by the Air Force."The...
. A four stage configuration, with an additional upper stage, a Star-37E, was also available, and was used for the two Helios launches. Star-37E stages were also used on the two Voyager launches, but were considered to be part of the payload rather than the rocket.