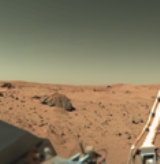 Chryse Planitia shows evidence of water erosion in the past, and is the bottom end for many outflow channels from the southern highlands as well as from Valles Marineris
Valles Marineris
Valles Marineris is a system of canyons that runs along the Martian surface east of the Tharsis region...
and the flanks of the Tharsis bulge. It is one of the lowest regions on Mars (2-3 km below the mean surface elevation of Mars), so water would tend to flow into it. The elevation generally goes down from the Tharsis Ridge to Chryse. Kasei Vallis
Kasei Vallis
Kasei Vallis, which means "Mars" in Japanese, is a large channel system in the Lunae Palus quadrangle, on Mars. It is located at 24.6° north latitude and 65° west longitude. It begins in Echus Chasma, near Valles Marineris, and empties into Chryse Planitia, not far from where Viking 1 landed. Kasei...
, Maja Valles
Maja Valles
Maja Valles is a large, ancient outflow channel in the Lunae Palus quadrangle on Mars. Its location is 12.6° north latitude and 58.3° west longitude. The name is a Nepali word for "Mars". Maja Valles begins at Juventae Chasma. Parts of the system have been partially buried by thin volcanic debris...
, and Nanedi Valles
Nanedi Valles
Nanedi Valles is a large valley in the Lunae Palus quadrangle of Mars, located at4.9° N and 49.0° W. It is 508.0 km long and was named for the word for "planet" in Sesotho, the national language of Lesotho, Africa....

appear to run from high areas (Tharsis Ridge) to Chryse Planitia. On the other side of Chryse, to the east, the land gets higher. Ares Vallis
Ares Vallis
Ares Vallis is an outflow channel on Mars, named after the Greek name for Mars: Ares, the god of war; it appears to have been carved by fluids, perhaps water...
travels from this high region, then empties into Chryse. Much of Tiu Valles
Tiu Valles
Tiu Valles is an outflow channel in the Oxia Palus quadrangle of Mars, located at 15.9° North and 35.7° West.It is 1,720 km long and was named after the word for "Mars" in old English ....
and Simud Valles
Simud Valles
Simud Valles is an ancient outflow channel in the Oxia Palus quadrangle of Mars, located at 19.8° N and 37.8° W. It is 945.0 km long and was named for the word for "Mars" in Sumerian. Note: Descriptor term changed to the plural , and coordinates redefined 3/31/2008....
move toward Chryse as well.
Several ancient river valleys discovered in Chryse Planitia by the Viking Orbiters, as part of the Viking program
Viking program
The Viking program consisted of a pair of American space probes sent to Mars, Viking 1 and Viking 2. Each spacecraft was composed of two main parts, an orbiter designed to photograph the surface of Mars from orbit, and a lander designed to study the planet from the surface...
, provided strong evidence for a great deal of running water on the surface of Mars.
It has been theorized that the Chryse basin may have contained a large lake or an ocean during the Hesperian
Hesperian
The Hesperian is a geologic system and time period on the planet Mars characterized by widespread volcanic activity and catastrophic flooding that carved immense outflow channels across the surface. The Hesperian is an intermediate and transitional period of Martian history...
or early Amazonian periods since all of the large outflow channels
Outflow channels
Outflow channels is the term used to describe extremely long, wide swathes of scoured ground on Mars, commonly containing the streamlined remnants of pre-existing topography and other linear erosive features indicating sculpting by fluids moving downslope...
entering it end at the same elevation, at which some surface features suggest an ancient shoreline may be present. Chryse basin opens into the North Polar Basin
North Polar Basin (Mars)
The North Polar Basin, or Borealis basin, is a large basin in the northern hemisphere of Mars that covers 40% of the planet. Chryse Planitia, the landing site of the Viking 1 lander, is a bay which opens into this basin....
, so if an ocean was present Chryse would have been a large bay.

The Viking 1
Viking 1
Viking 1 was the first of two spacecraft sent to Mars as part of NASA's Viking program. It was the first spacecraft to successfully land on Mars and perform its mission, and until May 19, 2010 held the record for the second longest Mars surface mission of 6 years and 116 days .- Mission :Following...
landed in Chryse Planitia, but its landing site was not near the outflow channels and no fluvial
Fluvial
Fluvial is used in geography and Earth science to refer to the processes associated with rivers and streams and the deposits and landforms created by them...
features were visible; the terrain at that point appeared primarily volcanic in origin. The Mars Pathfinder
Mars Pathfinder
Mars Pathfinder was an American spacecraft that landed a base station with roving probe on Mars in 1997. It consisted of a lander, renamed the Carl Sagan Memorial Station, and a lightweight wheeled robotic rover named Sojourner.Launched on December 4, 1996 by NASA aboard a Delta II booster a...
landed in Ares Vallis
Ares Vallis
Ares Vallis is an outflow channel on Mars, named after the Greek name for Mars: Ares, the god of war; it appears to have been carved by fluids, perhaps water...
, at the end of one of the outflow channels emptying into Chryse.