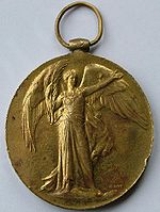 Encyclopedia
The Victory Medal is a campaign medal - of which the basic design and ribbon was adopted by Belgium, Brazil, Cuba, Czechoslovakia, France, Greece, Italy, Portugal, Romania, Siam, Union of South Africa and the USA in accordance with decisions as taken at the Inter-Allied Peace Conference at Versailles as illustrated (a 'Winged Victory
Médaille Interalliée 1914–1918
The Médaille Interalliée 1914–1918, is a French commemorative medal established 20 July 1922. It was awarded to all soldiers who served three months, consecutive or not, between 2 August 1914 and 11 November 1918 in the war zone...
) but in a particular form of this historic Greek monument as determined by each nation, with the exception of the nations in the Far East who issued the medal but with a different design.
The dates of the war were in every case 1914 to 1918, except that of the British Empire, which gave the dates as illustrated (1914 to 1919 with 1921 being the year in which the war ended in point of Parliamentary law but in 1919 under common law relating to the status and functions of the monarchy).

To qualify for the Victory medal one had to be mobilised in any service and have entered a theatre of war between 5 August 1914 and 11 November 1918. Women qualified for this and the earlier two medals, for service in nursing homes and other auxiliary forces.

It was also awarded to members of the British Naval mission to Russia
North Russia Campaign
The North Russia Intervention, also known as the Northern Russian Expedition, was part of the Allied Intervention in Russia after the October Revolution. The intervention brought about the involvement of foreign troops in the Russian Civil War on the side of the White movement...
1919 - 1920 and for mine clearance in the North Sea between 11 November 1918 and 30 November 1919.

Not only did the United Kingdom issue a Victory Medal, but a significant number of allied and associated countries involved in the conflict against the Austro-German alliance.
The proposition of such common award was first made by French marshal Ferdinand Foch
Ferdinand Foch
Ferdinand Foch , GCB, OM, DSO was a French soldier, war hero, military theorist, and writer credited with possessing "the most original and subtle mind in the French army" in the early 20th century. He served as general in the French army during World War I and was made Marshal of France in its...
who was supreme commander of the allied force during first world war. Each medal in bronze has the same diameter (36 mm) and ribbon (double rainbow) but with a national design representing a winged victory.