Nearly two centuries after the establishment of the New Kingdom of Granada
New Kingdom of Granada
The New Kingdom of Granada was the name given to a group of 16th century Spanish colonial provinces in northern South America governed by the president of the Audiencia of Bogotá, an area corresponding mainly to modern day Colombia and parts of Venezuela. Originally part of the Viceroyalty of...
in the 16th century, whose governor was loosely dependent upon the Viceroy
Viceroy
A viceroy is a royal official who runs a country, colony, or province in the name of and as representative of the monarch. The term derives from the Latin prefix vice-, meaning "in the place of" and the French word roi, meaning king. A viceroy's province or larger territory is called a viceroyalty...
of Peru at Lima
Lima
Lima is the capital and the largest city of Peru. It is located in the valleys of the Chillón, Rímac and Lurín rivers, in the central part of the country, on a desert coast overlooking the Pacific Ocean. Together with the seaport of Callao, it forms a contiguous urban area known as the Lima...
, and an audiencia at Santa Fé de Bogotá
Bogotá
Bogotá, Distrito Capital , from 1991 to 2000 called Santa Fé de Bogotá, is the capital, and largest city, of Colombia. It is also designated by the national constitution as the capital of the department of Cundinamarca, even though the city of Bogotá now comprises an independent Capital district...
(today capital of the republic of Colombia), the slowness of communications between the two capitals led to the creation of an independent Viceroyalty of New Granada in 1717 (and its reestablishment in 1739 after a short interruption). Other provinces corresponding to modern Ecuador, the eastern and southern parts of today's Venezuela, and Panama came together in a political unit under the jurisdiction of Bogotá, confirming that city as one of the principal administrative centers of the Spanish possessions in the New World
New World
The New World is one of the names used for the Western Hemisphere, specifically America and sometimes Oceania . The term originated in the late 15th century, when America had been recently discovered by European explorers, expanding the geographical horizon of the people of the European middle...
, along with Lima and Mexico City. Sporadic attempts at reform were directed at increasing efficiency and centralizing authority, but control from Spain was never very effective.

The rough and diverse geography of northern South America and the limited range of proper roads made travel and communications within the Viceroyalty difficult. The establishment of an autonomous Captaincy General in Caracas
Captaincy General of Venezuela
The Captaincy General of Venezuela was an administrative district of colonial Spain, created in 1777 to provide more autonomy for the provinces of Venezuela, previously under the jurisdiction of the Viceroyalty of New Granada and the Audiencia of Santo Domingo...
in 1777 and the preservation of the older Audiencia of Quito
Royal Audience of Quito
The Royal Audience of Quito was an administrative unit in the Spanish Empire which had political, military, and religious jurisdiction over territories that today include Ecuador, parts of northern Peru, parts of southern Colombia and parts of northern Brazil...
, nominally subject to the Viceroy but for most purposes independent, was a response to the necessities of effectively governing the peripheral regions. Some analysts also consider that these measures reflected a degree of local traditions that eventually contributed to the differing political and national differences among these territories once they became independent in the nineteenth century and which the unifying efforts of Simón Bolívar
Simón Bolívar
Simón José Antonio de la Santísima Trinidad Bolívar y Palacios Ponte y Yeiter, commonly known as Simón Bolívar was a Venezuelan military and political leader...
could not overcome. 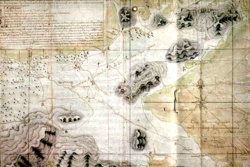 The Wayuu
Wayuu
Wayuu is an Amerindian ethnic group of the La Guajira Peninsula in northern Colombia and northwest Venezuela. They are part of the Maipurean language family.- Geography :...
(Guajiro) had never been subjugated by the Spanish. The two groups were in a more or less permanent state of war. There had been rebellions in 1701 (when they destroyed a Capuchin
Order of Friars Minor Capuchin
The Order of Friars Minor Capuchin is an Order of friars in the Catholic Church, among the chief offshoots of the Franciscans. The worldwide head of the Order, called the Minister General, is currently Father Mauro Jöhri.-Origins :...
mission), 1727 (when more than 2,000 Wayuus attacked the Spanish), 1741, 1757, 1761 and 1768. In 1718, Governor Soto de Herrera called them "barbarians, horse thieves, worthy of death, without God, without law and without a king". Of all the Indians in the territory of Colombia, the Wayuu were unique in having learned the use of firearms and horses. 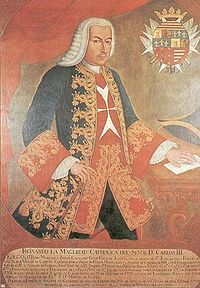 In 1769 the Spanish took 22 Wayuus captive, in order to put them to work building the fortifications of Cartagena
Cartagena, Colombia
Cartagena de Indias , is a large Caribbean beach resort city on the northern coast of Colombia in the Caribbean Coast Region and capital of Bolívar Department...
. The reaction of the Wayuus was unexpected. On 2 May 1769, at El Rincón
El Rincón
- Sources :* – World-Gazetteer.com...
, near Río de la Hacha
Riohacha
Riohacha, Rio Hacha or Rio de la Hacha , is a city in the Riohacha Municipality in the northern Caribbean Region of Colombia by the mouth of the Ranchería River and the Caribbean sea, capital city of the La Guajira Department. Founded by conquistador Nikolaus Federmann in 1535, Riohacha was named...
, they set their village afire, burning the church and two Spaniards who had taken refuge in it. They also captured the priest. The Spanish immediately dispatched an expedition from El Rincón to capture the Wayuus. At the head of this force was José Antonio de Sierra, a mestizo
Mestizo
Mestizo is a term traditionally used in Latin America, Philippines and Spain for people of mixed European and Native American heritage or descent...
who had also headed the party that had taken the 22 Guajiro captives. The Guajiros recognized him and forced his party to take refuge in the house of the curate, which they then set afire. Sierra and eight of his men were killed.

This success was soon known in other Guajiro areas, and more men joined the revolt. According to Messía
Pedro Messía de la Cerda
Pedro Messía Corea de la Cerda, 2nd Marquis of Vega de Armijo was a Spanish naval officer and colonial official...
, at the peak there were 20,000 Wayuus under arms. Many had firearms acquired from English and Dutch smugglers, sometimes even from the Spanish. This enabled the rebels to take nearly all the settlements of the region, which they burned. According to the authorities, more than 100 Spaniards were killed and many others taken prisoner. Many cattle were also taken by the rebels. The Spaniards took refuge in Riohacha
Riohacha
Riohacha, Rio Hacha or Rio de la Hacha , is a city in the Riohacha Municipality in the northern Caribbean Region of Colombia by the mouth of the Ranchería River and the Caribbean sea, capital city of the La Guajira Department. Founded by conquistador Nikolaus Federmann in 1535, Riohacha was named...
and sent urgent messages to Maracaibo
Maracaibo
Maracaibo is a city and municipality located in northwestern Venezuela off the western coast of the Lake Maracaibo. It is the second-largest city in the country after the national capital Caracas and the capital of Zulia state...
, Valledupar
Valledupar
Valledupar is a city and municipality in northeastern Colombia. It is the capital of Cesar Department and was founded in 1550 by the Spanish conquistador Hernando de Santana. Its name, Valle de Upar , was established in honor of the Amerindian cacique who ruled the valley; Cacique Upar...
, Santa Marta
Santa Marta
Santa Marta is the capital city of the Colombian department of Magdalena in the Caribbean Region. It was founded in July 29, 1525 by the Spanish conqueror Rodrigo de Bastidas, which makes it the oldest remaining city in Colombia...
and Cartagena, the latter responding by sending 100 troops. The rebels themselves were not unified. Sierra's relatives among the Indians took up arms against the rebels to avenge his death. A battle between the two groups of Wayuus was fought at La Soledad. That and the arrival of the Spanish reinforcements caused the rebellion to fade away, but not before the Guajiro had regained much territory.

The territories of the Viceroyalty gained full de facto
De facto
De facto is a Latin expression that means "concerning fact." In law, it often means "in practice but not necessarily ordained by law" or "in practice or actuality, but not officially established." It is commonly used in contrast to de jure when referring to matters of law, governance, or...
independence from Spain between 1819 and 1822 after a series of military and political struggles, uniting in a republic
Republic
A republic is a form of government in which the people, or some significant portion of them, have supreme control over the government and where offices of state are elected or chosen by elected people. In modern times, a common simplified definition of a republic is a government where the head of...
now known as Gran Colombia
Gran Colombia
Gran Colombia is a name used today for the state that encompassed much of northern South America and part of southern Central America from 1819 to 1831. This short-lived republic included the territories of present-day Colombia, Venezuela, Ecuador, Panama, northern Peru and northwest Brazil. The...
.

When Ecuador and Venezuela seceded from Gran Colombia, a "Republic of New Granada", with its capital at Bogotá, lasted from 1831 to 1856. The name "Colombia" reappeared in the "United States of Colombia
United States of Colombia
The United States of Colombia was the name adopted in 1861 through the Rionegro Constitution for the nation which had been known as the Republic of New Granada since the dissolution of the federation of Gran Colombia in 1830-1831....
", the new name for the country introduced by a liberal government after a civil war
Colombian Civil War (1860–1862)
The Colombian Civil War of May 8 1860 to November 1862 was an internal conflict between the newly formed conservative Grenadine Confederation and a more liberal rebel force from the newly seceded region of Cauca, composed of dissatisfied politicians commanded by General Tomás Cipriano de Mosquera,...
. The use of the term "New Granada" survived in conservative circles, such as among ecclesiastics.

As is typical in Spanish, older adjectives of places are used as demonym
Demonym
A demonym , also referred to as a gentilic, is a name for a resident of a locality. A demonym is usually – though not always – derived from the name of the locality; thus, the demonym for the people of England is English, and the demonym for the people of Italy is Italian, yet, in english, the one...
s for people from those areas. Today, it is typical in Spanish to refer to Colombians as neogranadinos ("New Granadians"), especially in neighboring Venezuela.