Encyclopedia
Riohacha, Rio Hacha or Rio de la Hacha (River of the Axe - Wayuu
Wayuu language
The Wayuu language, or Goajiro , is spoken by 305,000 indigenous Wayuu people in northeastern Colombia and northwestern Venezuela on the Guajira Peninsula....
: Süchiimma), is a city in the Riohacha Municipality
Riohacha Municipality
Riohacha Municipality is located at the Caribbean Coast of La Guajira Department, Colombia. It extends over 3.120 km² and has an urban part , 14 Corregimientos and 8 Resguardos Indígenas .It is 1.121 km north of Bogotá.The...
in the northern Caribbean Region of Colombia
Colombia
Colombia, officially the Republic of Colombia , is a unitary constitutional republic comprising thirty-two departments. The country is located in northwestern South America, bordered to the east by Venezuela and Brazil; to the south by Ecuador and Peru; to the north by the Caribbean Sea; to the...
by the mouth of the Ranchería River
Ranchería River
The Ranchería River is a river located in northern La Guajira Department, Colombia. Born in the Sierra Nevada de Santa Marta southern steps flows south, abruptly turns northeast and then north towards the Caribbean sea where it finally flows into.-2007 Floods:...
and the Caribbean sea
Caribbean Sea
The Caribbean Sea is a sea of the Atlantic Ocean located in the tropics of the Western hemisphere. It is bounded by Mexico and Central America to the west and southwest, to the north by the Greater Antilles, and to the east by the Lesser Antilles....
, capital city of the La Guajira Department. Founded by conquistador
Conquistador
Conquistadors were Spanish soldiers, explorers, and adventurers who brought much of the Americas under the control of Spain in the 15th to 16th centuries, following Europe's discovery of the New World by Christopher Columbus in 1492...
Nikolaus Federmann
Nikolaus Federmann
Nikolaus Federmann was a German adventurer and conquistador in the colonies of Venezuela and Colombia. He worked in the service of the Welser brothers.- Life :...
in 1535, Riohacha was named after a local legend "The legend of the Axe". Owing to the powerful rain shadow
Rain shadow
A rain shadow is a dry area on the lee side of a mountainous area. The mountains block the passage of rain-producing weather systems, casting a "shadow" of dryness behind them. As shown by the diagram to the right, the warm moist air is "pulled" by the prevailing winds over a mountain...
of the Sierra Nevada de Santa Marta
Sierra Nevada de Santa Marta
The Sierra Nevada de Santa Marta is an isolated mountain range apart from the Andes chain that runs through Colombia. Reaching an altitude of 5,700 metres above sea level just 42 km from the Caribbean coast, the Sierra Nevada is the world's highest coastal range...
, the area is mostly desert
Desert
A desert is a landscape or region that receives an extremely low amount of precipitation, less than enough to support growth of most plants. Most deserts have an average annual precipitation of less than...
ic and inhabited by Amerindians, predominantly by members of the Wayuu
Wayuu
Wayuu is an Amerindian ethnic group of the La Guajira Peninsula in northern Colombia and northwest Venezuela. They are part of the Maipurean language family.- Geography :...
ethnic group. During colonial times Riohacha was a very important port due to findings of vast amounts of pearl
Pearl
A pearl is a hard object produced within the soft tissue of a living shelled mollusk. Just like the shell of a mollusk, a pearl is made up of calcium carbonate in minute crystalline form, which has been deposited in concentric layers. The ideal pearl is perfectly round and smooth, but many other...
s. In recent years the city became one of Colombia's medium importance maritime commercial ports as well as a multicultural center for the Department. It is mentioned several times in the novel One Hundred Years of Solitude
One Hundred Years of Solitude
One Hundred Years of Solitude , by Gabriel García Márquez, is a novel which tells the multi-generational story of the Buendía family, whose patriarch, José Arcadio Buendía, founds the town of Macondo, the metaphoric Colombia...
, and seven times in the novel Chronicle of a Death Foretold
Chronicle of a Death Foretold
Chronicle of a Death Foretold is a novella by Gabriel García Márquez, published in 1981...
, both written by Gabriel García Márquez
Gabriel García Márquez
Gabriel José de la Concordia García Márquez is a Colombian novelist, short-story writer, screenwriter and journalist, known affectionately as Gabo throughout Latin America. He is considered one of the most significant authors of the 20th century. He was awarded the Nobel Prize in Literature in...
. 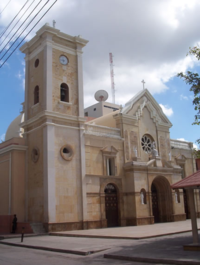 The Riohacha area was inhabited by American Indians of the Wayuu
Wayuu
Wayuu is an Amerindian ethnic group of the La Guajira Peninsula in northern Colombia and northwest Venezuela. They are part of the Maipurean language family.- Geography :...
culture, part of the larger Arawak group. The territory was "discovered" by Spanish
Spanish people
The Spanish are citizens of the Kingdom of Spain. Within Spain, there are also a number of vigorous nationalisms and regionalisms, reflecting the country's complex history....
sailor Alonso de Ojeda
Alonso de Ojeda
Alonso de Ojeda was a Spanish navigator, governor and conquistador. His name is sometimes spelled Alonzo and Oxeda.-Early life:...
in 1498, though he never landed. A short time later, Juan de la Cosa
Juan de la Cosa
Juan de la Cosa was a Spanish cartographer, conquistador and explorer. He made the earliest extant European world map to incorporate the territories of the Americas that were discovered in the 15th century, sailed first 3 voyages with Christopher Columbus, and was the owner/captain of the Santa...
, another Spanish explorer, landed on what is today called Cabo de la Vela
Cabo de la Vela
Cabo de la Vela is a headland in the Guajira Peninsula in Colombia with an adjacent small fishing village. It is a popular ecotourism destination of the Caribbean Region of Colombia-History:...
(Cape of the Sail, so called because of its shape). In 1535, the German explorer Nikolaus Federmann
Nikolaus Federmann
Nikolaus Federmann was a German adventurer and conquistador in the colonies of Venezuela and Colombia. He worked in the service of the Welser brothers.- Life :...
founded a city with the name Nuestra Señora Santa Maria de los Remedios del Cabo de la Vela (Our Lady Saint Mary of the Remedies of the Cape of the Sail) at the place de la Cosa landed.

The Spanish discovered a vast amount of pearl
Pearl
A pearl is a hard object produced within the soft tissue of a living shelled mollusk. Just like the shell of a mollusk, a pearl is made up of calcium carbonate in minute crystalline form, which has been deposited in concentric layers. The ideal pearl is perfectly round and smooth, but many other...
s in the city's area, which made the city a constant target for pirates. After the city was destroyed by a pirate raid, the city government relocated the city to the mouth of the Rancheria River
Rancheria River
Rancheria River may refer to the:*the Ranchería River, a river in the department of La Guajira in Colombia*the Rancheria River , a river in the Yukon Territory, Canada, tributary to the Liard River....
, in order to confuse the pirates, and hopefully give the city time to rebuild before the next attack. The new city, named Nuestra Señora de los Remedios del Río de la Hacha (Our Lady of the Remedies of the Ax River), expanded peacefully for a short time in its new location, but pirate attacks soon resumed. The next major attack, led by the famous English pirate Francis Drake
Francis Drake
Sir Francis Drake, Vice Admiral was an English sea captain, privateer, navigator, slaver, and politician of the Elizabethan era. Elizabeth I of England awarded Drake a knighthood in 1581. He was second-in-command of the English fleet against the Spanish Armada in 1588. He also carried out the...
, took place in 1596, when Drake pillaged the city searching for gold
Gold
Gold is a chemical element with the symbol Au and an atomic number of 79. Gold is a dense, soft, shiny, malleable and ductile metal. Pure gold has a bright yellow color and luster traditionally considered attractive, which it maintains without oxidizing in air or water. Chemically, gold is a...
and pearls.

During its period of independence from Spain
Spain
Spain , officially the Kingdom of Spain languages]] under the European Charter for Regional or Minority Languages. In each of these, Spain's official name is as follows:;;;;;;), is a country and member state of the European Union located in southwestern Europe on the Iberian Peninsula...
, the port of Riohacha served many vessels fighting the Spanish for Colombian and Venezuela
Venezuela
Venezuela , officially called the Bolivarian Republic of Venezuela , is a tropical country on the northern coast of South America. It borders Colombia to the west, Guyana to the east, and Brazil to the south...
n independence. Many Riohachans also served in the revolutionary navy, most notably Admiral José Prudencio Padilla
José Prudencio Padilla
Admiral José Prudencio Padilla López was a Colombian military leader who fought in the Spanish American wars of independence...
, who would come to be considered a hero in the revolutions of Colombia and Venezuela.

In 1954, Riohacha City acquired municipality status, and in 1964 was declared capital of the new La Guajira Department.

Riohacha has one airport, the Almirante Padilla Airport which covers a route from and to the Colombian capital city Bogotá
Bogotá
Bogotá, Distrito Capital , from 1991 to 2000 called Santa Fé de Bogotá, is the capital, and largest city, of Colombia. It is also designated by the national constitution as the capital of the department of Cundinamarca, even though the city of Bogotá now comprises an independent Capital district...
, the near city of Valledupar
Valledupar
Valledupar is a city and municipality in northeastern Colombia. It is the capital of Cesar Department and was founded in 1550 by the Spanish conquistador Hernando de Santana. Its name, Valle de Upar , was established in honor of the Amerindian cacique who ruled the valley; Cacique Upar...
and (effective March 21'st) Aruba
Aruba
Aruba is a 33 km-long island of the Lesser Antilles in the southern Caribbean Sea, located 27 km north of the coast of Venezuela and 130 km east of Guajira Peninsula...
.

Riohacha, owing to the rain shadow of the Sierra Nevada de Santa Marta, has a semi-arid climate (Köppen
Köppen climate classification
The Köppen climate classification is one of the most widely used climate classification systems. It was first published by Crimea German climatologist Wladimir Köppen in 1884, with several later modifications by Köppen himself, notably in 1918 and 1936...
BSh), which owing to the extremely torrid temperatures is not that far above an arid climate despite receiving as much as 546 millimetres (21 in) of rainfall per year. This rain falls almost exclusively in May and between August and November, and for the rest of the year there are a mere thirteen wet days out of 212 in an average year. Despite the lack of rainfall, humidity is high year round and adds to the uncomfortable heat.