Encyclopedia
The Narva Triumphal Arch (lit. Gate) was erected in the vast Narva
Narva
Narva is the third largest city in Estonia. It is located at the eastern extreme point of Estonia, by the Russian border, on the Narva River which drains Lake Peipus.-Early history:...
Square (known as the Stachek Square in Soviet years), Saint Petersburg
Saint Petersburg
Saint Petersburg is a city and a federal subject of Russia located on the Neva River at the head of the Gulf of Finland on the Baltic Sea...
, in 1814 to commemorate the Russian victory over Napoleon. The wooden structure was constructed on the Narva highway with the purpose of greeting the soldiers who were returning from abroad after their victory over Napoleon. The architect of the original Narva Arch was Giacomo Quarenghi
Giacomo Quarenghi
Giacomo Quarenghi was the foremost and most prolific practitioner of Palladian architecture in Imperial Russia, particularly in Saint Petersburg.- Career in Italy :...
. The program was meant to respond to the Arc de Triomphe du Carrousel
Arc de Triomphe du Carrousel
The Arc de Triomphe du Carrousel is a triumphal arch in Paris, located in the Place du Carrousel on the site of the former Tuileries Palace. It was built between 1806 and 1808 to commemorate Napoleon's military victories of the previous year...
in Paris, originally erected to celebrate Napoleon's victory over the Allies at Austerlitz
Battle of Austerlitz
The Battle of Austerlitz, also known as the Battle of the Three Emperors, was one of Napoleon's greatest victories, where the French Empire effectively crushed the Third Coalition...
, but the material used was a weather-resistant plaster that was never intended to be permanent. 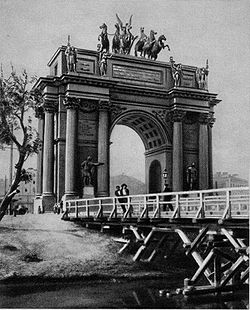 Between 1827 and 1834 Vasily Stasov
Vasily Stasov
Vasily Petrovich Stasov was a Russian architect.-Biography:Stasov was born in Moscow....
redesigned and rebuilt the gate in stone. A similar gate
Moscow Triumphal Gates
The Moscow Triumphal Gate is a Neoclassical triumphal arch in Saint Petersburg, Russia. The monument — built mainly in cast iron — was erected in 1834 -1838 in the memory of the Russian victory in the Russo-Turkish War, 1828-1829.-19th century:...
, also by Stasov, was erected on the road leading to Moscow
Moscow
Moscow is the capital, the most populous city, and the most populous federal subject of Russia. The city is a major political, economic, cultural, scientific, religious, financial, educational, and transportation centre of Russia and the continent...
. A sculptor Vasily Demut-Malinovsky
Vasily Demut-Malinovsky
Vasily Ivanovich Demuth-Malinovsky was a Russian sculptor whose works represent the quintessence of the Empire style....
was responsible for the arch's sculptural decor. As has been conventional since Imperial Roman times, sculptures of Fame
Pheme
In Greek mythology, Pheme was the personification of fame and renown, her favour being notability, her wrath being scandalous rumors. She was a daughter either of Gaia or of Hope, was described as "she who initiates and furthers communication" and had an altar at Athens...
offering laurel wreaths fill the spandrel
Spandrel
A spandrel, less often spandril or splaundrel, is the space between two arches or between an arch and a rectangular enclosure....
s of the central arch. The main entablature
Entablature
An entablature refers to the superstructure of moldings and bands which lie horizontally above columns, resting on their capitals. Entablatures are major elements of classical architecture, and are commonly divided into the architrave , the frieze ,...
breaks boldly forward over paired Composite columns
Composite order
The composite order is a mixed order, combining the volutes of the Ionic order capital with the acanthus leaves of the Corinthian order. The composite order volutes are larger, however, and the composite order also has echinus molding with egg-and-dart ornamentation between the volutes...
that flank the opening and support colossal sculptures. Nike
Nike (mythology)
In Greek mythology, Nike was a goddess who personified victory, also known as the Winged Goddess of Victory. The Roman equivalent was Victoria. Depending upon the time of various myths, she was described as the daughter of Pallas and Styx and the sister of Kratos , Bia , and Zelus...
, the Goddess of Victory surmounts the arch, in a triumphal car drawn by six horses, sculpted by Peter Clodt von Jürgensburg
Peter Clodt von Jürgensburg
Baron Peter Clodt von Jürgensburg, known in Russian as Pyotr Karlovich Klodt , was a favourite sculptor of Nicholas I of Russia.Stemming from a distinguished family of Baltic Germans, Clodt von Jürgensburg, Klodt started his career as a professional artillery officer and amateur sculptor...
, instead of the traditional Quadriga
Quadriga
A quadriga is a car or chariot drawn by four horses abreast . It was raced in the Ancient Olympic Games and other contests. It is represented in profile as the chariot of gods and heroes on Greek vases and in bas-relief. The quadriga was adopted in ancient Roman chariot racing...
.

Neither the arch nor the Russian Admiralty
Russian Admiralty
Admiralty Board was a supreme body for the administration of the Imperial Russian Navy in the Russian Empire, established by Peter the Great on December 12, 1718, and headquartered in the Admiralty building, Saint Petersburg....
were protected from artillery bombardments during the Siege of Leningrad
Siege of Leningrad
The Siege of Leningrad, also known as the Leningrad Blockade was a prolonged military operation resulting from the failure of the German Army Group North to capture Leningrad, now known as Saint Petersburg, in the Eastern Front theatre of World War II. It started on 8 September 1941, when the last...
.
A small military museum was opened in the upper part of the arch in 1989.
At the beginning of 21st century the gate was capitally restored and according to experts, is in a fine condition as of August 2009.