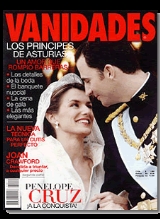 Encyclopedia
Vanidades is one of the most popular Spanish language
Spanish language
Spanish , also known as Castilian , is a Romance language in the Ibero-Romance group that evolved from several languages and dialects in central-northern Iberia around the 9th century and gradually spread with the expansion of the Kingdom of Castile into central and southern Iberia during the...
women's magazines. Published by Editorial Televisa
Televisa
Televisa is a Mexican multimedia conglomerate, the largest mass media company in Latin America and in the Spanish-speaking world. It is a major international entertainment business, with much of its programming airing in the United States on Univision, with which it has an exclusive contract...
across the United States
United States
The United States of America is a federal constitutional republic comprising fifty states and a federal district...
and Hispanic America
Hispanic America
Hispanic America or Spanish America is the region comprising the American countries inhabited by Spanish-speaking populations.These countries have significant commonalities with each other and with Spain, whose colonies they formerly were...
, it was launched in Cuba
Cuba
The Republic of Cuba is an island nation in the Caribbean. The nation of Cuba consists of the main island of Cuba, the Isla de la Juventud, and several archipelagos. Havana is the largest city in Cuba and the country's capital. Santiago de Cuba is the second largest city...
in 1931 as a humor magazine
Humor magazine
A humor magazine is a magazine specifically designed to deliver humorous content to its readership. These publications often offer satire, but some put an emphasis on cartoons, one-liners or humorous essays.-Out-of-print humor magazines:...
, but eventually became a women's magazine in the early 1940s. When Fidel Castro
Fidel Castro
Fidel Alejandro Castro Ruz is a Cuban revolutionary and politician, having held the position of Prime Minister of Cuba from 1959 to 1976, and then President from 1976 to 2008. He also served as the First Secretary of the Communist Party of Cuba from the party's foundation in 1961 until 2011...
took the power, Vanidades headquarters moved to Miami from Havana. Later, in 1961, Vanidades was relaunched as Nueva Vanidades and eventually as Vanidades Continental.

The profile of the magazine is intended to be for women, addressing them in a friendly manner and serving as a guide to help them keep up with the trends in fashion
Fashion
Fashion, a general term for a currently popular style or practice, especially in clothing, foot wear, or accessories. Fashion references to anything that is the current trend in look and dress up of a person...
, culture
Culture
Culture is a term that has many different inter-related meanings. For example, in 1952, Alfred Kroeber and Clyde Kluckhohn compiled a list of 164 definitions of "culture" in Culture: A Critical Review of Concepts and Definitions...
, art
Art
Art is the product or process of deliberately arranging items in a way that influences and affects one or more of the senses, emotions, and intellect....
s, health
Health
Health is the level of functional or metabolic efficiency of a living being. In humans, it is the general condition of a person's mind, body and spirit, usually meaning to be free from illness, injury or pain...
and beauty
Beauty
Beauty is a characteristic of a person, animal, place, object, or idea that provides a perceptual experience of pleasure, meaning, or satisfaction. Beauty is studied as part of aesthetics, sociology, social psychology, and culture...
. To guarantee its market success the magazine is edited locally in some cases, blending national preferences with international trends and always following its traditionally classical style.

The main headquarters of Vanidades are now located in Mexico
Mexico
The United Mexican States , commonly known as Mexico , is a federal constitutional republic in North America. It is bordered on the north by the United States; on the south and west by the Pacific Ocean; on the southeast by Guatemala, Belize, and the Caribbean Sea; and on the east by the Gulf of...
. However, localized editions are released simultaneously in Argentina, Chile
Chile
Chile ,officially the Republic of Chile , is a country in South America occupying a long, narrow coastal strip between the Andes mountains to the east and the Pacific Ocean to the west. It borders Peru to the north, Bolivia to the northeast, Argentina to the east, and the Drake Passage in the far...
, Bolivia, Colombia, Ecuador, Peru, Brazil, United States, Puerto Rico
Puerto Rico
Puerto Rico , officially the Commonwealth of Puerto Rico , is an unincorporated territory of the United States, located in the northeastern Caribbean, east of the Dominican Republic and west of both the United States Virgin Islands and the British Virgin Islands.Puerto Rico comprises an...
and the Dominican Republic
Dominican Republic
The Dominican Republic is a nation on the island of La Hispaniola, part of the Greater Antilles archipelago in the Caribbean region. The western third of the island is occupied by the nation of Haiti, making Hispaniola one of two Caribbean islands that are shared by two countries...
.