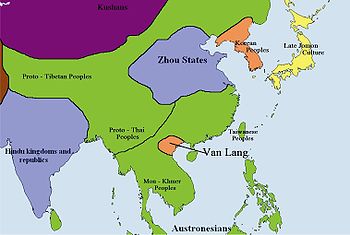 Văn Lang was, according to tradition, the first nation of the ancient Vietnamese people
Vietnamese people
The Vietnamese people are an ethnic group originating from present-day northern Vietnam and southern China. They are the majority ethnic group of Vietnam, comprising 86% of the population as of the 1999 census, and are officially known as Kinh to distinguish them from other ethnic groups in Vietnam...
, founded in 2879 BC
3rd millennium BC
The 3rd millennium BC spans the Early to Middle Bronze Age.It represents a period of time in which imperialism, or the desire to conquer, grew to prominence, in the city states of the Middle East, but also throughout Eurasia, with Indo-European expansion to Anatolia, Europe and Central Asia. The...
and existing until 258 BC
258 BC
Year 258 BC was a year of the pre-Julian Roman calendar. At the time it was known as the Year of the Consulship of Calatinus and Peterculus...
. It was ruled by the Hùng Kings of the Hồng Bàng Dynasty. There is, however, little reliable historical information available. Hùng Vương is the title of a line of kings and the Văn Lang kingdom are attested in Chinese (Ch'in
Qin Dynasty
The Qin Dynasty was the first imperial dynasty of China, lasting from 221 to 207 BC. The Qin state derived its name from its heartland of Qin, in modern-day Shaanxi. The strength of the Qin state was greatly increased by the legalist reforms of Shang Yang in the 4th century BC, during the Warring...
and T'ang
Tang Dynasty
The Tang Dynasty was an imperial dynasty of China preceded by the Sui Dynasty and followed by the Five Dynasties and Ten Kingdoms Period. It was founded by the Li family, who seized power during the decline and collapse of the Sui Empire...
dynastic) sources. The people of Văn Lang were referred to as the Lạc Việt, or sometimes simply the Lạc.

According to the 15th century book Đại Việt sử ký toàn thư (Đại Việt Complete History), this nation had its capital in Phong Châu; now in Phú Thọ Province
Phu Tho Province
Phú Thọ is a province in northeastern Vietnam. The province's name derives from Sino-Vietnamese and its capital is Viet Tri City, which is away from Hanoi and from the Noi Bai International Airport...
). It was bordered to the east by the South China Sea
South China Sea
The South China Sea is a marginal sea that is part of the Pacific Ocean, encompassing an area from the Singapore and Malacca Straits to the Strait of Taiwan of around...
, to the west by Ba Thục 巴蜀; today Sichuan
Sichuan
' , known formerly in the West by its postal map spellings of Szechwan or Szechuan is a province in Southwest China with its capital in Chengdu...
), to the north by Dongting Lake
Dongting Lake
Dongting Lake, or Lake Dongting is a large, shallow lake in northeastern Hunan province, China. It is a flood basin of the Yangtze River . Hence the lake's size depends on the season...
(Hunan
Hunan
' is a province of South-Central China, located to the south of the middle reaches of the Yangtze River and south of Lake Dongting...
), and to the south by Lake Tôn (Champa
Champa
The kingdom of Champa was an Indianized kingdom that controlled what is now southern and central Vietnam from approximately the 7th century through to 1832.The Cham people are remnants...
). According to Tran Trong Kim
Tran Trong Kim
Trần Trọng Kim was a Vietnamese scholar and politician who served as the Prime Minister of the short-lived Empire of Vietnam, a puppet state created by Imperial Japan in 1945...
in the book Việt Nam sử lược (A Brief History of Vietnam), this country was divided into 15 regions as in the table below:

The founder of Văn Lang was Hùng Vương
Hung Vuong
Hùng Vương is a title used in many modern discussions of the ancient Vietnamese rulers of the Hồng Bàng) period. In antiquity this title began to be used for the ruler who was the religious and political leader of united ancient Vietnam...
(King Hùng). The Hùng Vương throne was hereditary. The Hùng Kings were military commanders and religious leaders at the same time.

Văn Lang was supposedly ruled by 88 Hùng Kings, but only 18 names are recorded (or, according to recent research, 18 names of 18 Dynasties, like Ancient Egyptian):


Văn Lang ended when, in roughly 258 BC
258 BC
Year 258 BC was a year of the pre-Julian Roman calendar. At the time it was known as the Year of the Consulship of Calatinus and Peterculus...
E, the Âu Việt tribe invaded. The Âu Việt king, Thục Phán, defeated the last Hùng Vương, uniting the two kingdoms, naming the new nation "Âu Lạc", and proclaiming himself King An Dương Vương
An Duong Vuong
An Dương Vương is the title of Thục Phán , who ruled over the ancient kingdom of Âu Lạc from 257 to 207 BCE, after defeating the state of Văn Lang and uniting the two tribes Âu Việt and Lạc Việt...
.