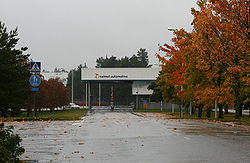 Valmet Automotive (former Saab-Valmet) is a Finnish
Finland
Finland , officially the Republic of Finland, is a Nordic country situated in the Fennoscandian region of Northern Europe. It is bordered by Sweden in the west, Norway in the north and Russia in the east, while Estonia lies to its south across the Gulf of Finland.Around 5.4 million people reside...
car
Automobile
An automobile, autocar, motor car or car is a wheeled motor vehicle used for transporting passengers, which also carries its own engine or motor...
maker. The majority of company is owned by Metso
Metso
Metso Corporation was created in 1999 through the merger of Valmet and Rauma and is headquartered in Helsinki, Finland. Metso is a global supplier of process industry machinery and systems as well as know-how and aftermarket services...
(former Valmet). The automobile production company was founded in 1968. Valmet Automotive is a brand-independent contract manufacturer
Contract manufacturer
A contract manufacturer is a manufacturer that contracts with a firm for components or products. It is a form of outsourcing.-Business model:...
of specialty motor cars. Historically Valmet Automotive has produced cars for Saab Automobile
Saab Automobile
Saab Automobile AB, better known as Saab , is a Swedish car manufacturer owned by Dutch automobile manufacturer Swedish Automobile NV, formerly Spyker Cars NV. It is the exclusive automobile Royal Warrant holder as appointed by the King of Sweden...
, Talbot
Talbot
Talbot was an automobile marque that existed from 1903 to 1986, with a hiatus from 1960 to 1978, under a number of different owners, latterly under Peugeot...
, Renault
Renault
Renault S.A. is a French automaker producing cars, vans, and in the past, autorail vehicles, trucks, tractors, vans and also buses/coaches. Its alliance with Nissan makes it the world's third largest automaker...
, Lada
Lada
Lada is a trademark of AvtoVAZ, a Russian car manufacturer in Tolyatti, Samara Oblast. All AvtoVAZ vehicles are currently sold under the Lada brand, though this was not always so; Lada was originally AvtoVAZ's export brand for models it sold under the Zhiguli name in the domestic Soviet market...
, Opel
Opel
Adam Opel AG, generally shortened to Opel, is a German automobile company founded by Adam Opel in 1862. Opel has been building automobiles since 1899, and became an Aktiengesellschaft in 1929...
and Porsche
Porsche
Porsche Automobil Holding SE, usually shortened to Porsche SE a Societas Europaea or European Public Company, is a German based holding company with investments in the automotive industry....
.

Valtion Kivääritehdas was merged into Valmet in 1951.
The firearms most notably developed by Valmet include the Rk 62
Rk 62
The Rk 62 is an assault rifle manufactured by Valmet and Sako. It is the standard issue infantry weapon of the Finnish Defence Forces....
, mod. 78 7.62x51, M82
Valmet M82
The Valmet M82 is a bullpup assault rifle with a Valmet M76 internal design created by Finnish company Valmet.-History:The M82 was introduced in Finland in 1978 and discontinued production in 1986....
and the RK 95 TP
Rk 95 TP
The Rk 95 Tp is a 7.62 mm Finnish assault rifle adopted by the Finnish Defence Forces in the 1990s in relatively small numbers.-History:...
.

Main tasks were the assembly and licence production of Fouga Magister
Fouga Magister
The Fouga Magister is a 1950s French two-seat jet trainer. The related CM.175 Zéphyr was a carrier-capable version for the French Navy....
trainers, Saab Draken fighters and BAe Hawk
BAE Hawk
The BAE Systems Hawk is a British single-engine, advanced jet trainer aircraft. It first flew in 1974 as the Hawker Siddeley Hawk. The Hawk is used by the Royal Air Force, and other air forces, as either a trainer or a low-cost combat aircraft...
trainers. The Tampere factory was closed in the 1960s and main part of the aircraft factory became the facility at Kuorevesi.

After the Finnish state privatized Valmet in 1996, the aviation division was detached and integrated into Finnish defence industries, Patria
Patria (company)
Patria is a Finnish company which produces a wide range of defence, aviation and aerospace technology. It carries on the firearms tradition of Valtion Kivääritehdas and the aerospace tradition of Valtion lentokonetehdas.-Patria Aviation:* NH90* Mini-UAVs...
, as Patria Finavitec. The military part is mostly state-owned but EADS owns 27 per cent of Patria.

This period started with the assembly of F/A-18 Hornet
F/A-18 Hornet
The McDonnell Douglas F/A-18 Hornet is a supersonic, all-weather carrier-capable multirole fighter jet, designed to dogfight and attack ground targets . Designed by McDonnell Douglas and Northrop, the F/A-18 was derived from the latter's YF-17 in the 1970s for use by the United States Navy and...
fighter aircraft and NH90 helicopters. Civilian work increased in the form of participating in design and manufacture of parts for Airbus
Airbus
Airbus SAS is an aircraft manufacturing subsidiary of EADS, a European aerospace company. Based in Blagnac, France, surburb of Toulouse, and with significant activity across Europe, the company produces around half of the world's jet airliners....
aircraft, most notably A380
Airbus A380
The Airbus A380 is a double-deck, wide-body, four-engine jet airliner manufactured by the European corporation Airbus, a subsidiary of EADS. It is the largest passenger airliner in the world. Due to its size, many airports had to modify and improve facilities to accommodate it...
spoilers.

Other notable products were paper mill
Paper mill
A paper mill is a factory devoted to making paper from vegetable fibres such as wood pulp, old rags and other ingredients using a Fourdrinier machine or other type of paper machine.- History :...
machinery and process control
Process control
Process control is a statistics and engineering discipline that deals with architectures, mechanisms and algorithms for maintaining the output of a specific process within a desired range...
equipment. Valtion tykkitehdas produced artillery
Artillery
Originally applied to any group of infantry primarily armed with projectile weapons, artillery has over time become limited in meaning to refer only to those engines of war that operate by projection of munitions far beyond the range of effect of personal weapons...
pieces for the Finnish Army
Finnish Army
The Finnish Army is the land forces branch of the Finnish Defence Forces.Today's Army is divided into six branches: the infantry , field artillery, anti-aircraft artillery, engineers, signals, and materiel troops.-History of the Finnish Army:Between 1809 and 1917 Finland was an autonomous part of...
along with Tampella
Tampella
Oy Tampella Ab was a Finnish heavy industry manufacturer, a maker of paper machines, locomotives, military weaponry, as well as wood-based products such as packaging. The company was based mainly in the city of Tampere....
AB industries. After World War II
World War II
World War II, or the Second World War , was a global conflict lasting from 1939 to 1945, involving most of the world's nations—including all of the great powers—eventually forming two opposing military alliances: the Allies and the Axis...
production switched to paper mills.

Valmet dockyards were merged with Wärtsilä
Wärtsilä
Wärtsilä is a Finnish corporation which manufactures and services power sources and other equipment in the marine and energy markets. The core products of Wärtsilä include large combustion engines...
yards to form Wärtsilä marine. After the bankruptcy the company re-emerged as Masa Yards, later becoming Aker Finnyards and subsequently Aker Yards
Aker Yards
STX Europe AS, formerly Aker Yards ASA, a subsidiary of the South Korean industrial chaebol STX Corporation, is the largest shipbuilding group in Europe and the fourth largest in the world. With headquarters in Oslo, Norway, STX Europe operates 15 shipyards in Brazil, Finland, France, Norway,...
. was built at the Vuosaari shipyard
Vuosaari shipyard
Vuosaari shipyard was a shipyard located in the district of Vuosaari in Helsinki, Finland. Built by the Finnish state-owned company Valmet Oy in the 1970s, the shipyard delivered 33 newbuildings and participated in building around 100 other vessels before it was closed in 1987...
in Helsinki.

Between 1958 and 1991 Valmet procuded a large number of locomotive
Locomotive
A locomotive is a railway vehicle that provides the motive power for a train. The word originates from the Latin loco – "from a place", ablative of locus, "place" + Medieval Latin motivus, "causing motion", and is a shortened form of the term locomotive engine, first used in the early 19th...
s, diesel multiple unit
Diesel multiple unit
A diesel multiple unit or DMU is a multiple unit train consisting of multiple carriages powered by one or more on-board diesel engines. They may also be referred to as a railcar or railmotor, depending on country.-Design:...
s and electric multiple unit
Electric multiple unit
An electric multiple unit or EMU is a multiple unit train consisting of self-propelled carriages, using electricity as the motive power. An EMU requires no separate locomotive, as electric traction motors are incorporated within one or a number of the carriages...
s for the Finnish State Railways, as well as a number of tram
Tram
A tram is a passenger rail vehicle which runs on tracks along public urban streets and also sometimes on separate rights of way. It may also run between cities and/or towns , and/or partially grade separated even in the cities...
s for Helsinki City Transport
Helsinki City Transport
Helsinki City Transport or HKL is the official city-owned public transport company in Helsinki, Finland. It operates the Helsinki metro, Helsinki tram and ferry boat traffic...
.

The company also manufactured trolleybus
Trolleybus
A trolleybus is an electric bus that draws its electricity from overhead wires using spring-loaded trolley poles. Two wires and poles are required to complete the electrical circuit...
es, between 1948 and 1960, but the total number built was only 52, comprising 23 for Helsinki
Helsinki
Helsinki is the capital and largest city in Finland. It is in the region of Uusimaa, located in southern Finland, on the shore of the Gulf of Finland, an arm of the Baltic Sea. The population of the city of Helsinki is , making it by far the most populous municipality in Finland. Helsinki is...
and 29 for Tampere
Tampere
Tampere is a city in southern Finland. It is the most populous inland city in any of the Nordic countries. The city has a population of , growing to approximately 300,000 people in the conurbation and over 340,000 in the metropolitan area. Tampere is the third most-populous municipality in...
.

Tractor
Tractor
A tractor is a vehicle specifically designed to deliver a high tractive effort at slow speeds, for the purposes of hauling a trailer or machinery used in agriculture or construction...
s have been produced by Valmet, both in Brazil
Brazil
Brazil , officially the Federative Republic of Brazil , is the largest country in South America. It is the world's fifth largest country, both by geographical area and by population with over 192 million people...
and Finland. The producer and brand is now Valtra
Valtra
Valtra is a Finnish based manufacturer of tractors owned by the AGCO Corporation.-History:Valtra traces its origin to Valmet, Bolinder, Munktell and Volvo. Bolinder-Munktell merged with Volvo in 1950 to form BM Volvo. In 1979, BM Volvo/Volvo BM and Valmet formed a joint venture for tractor...
. The tractor business, though still located in Finland, is owned by AGCO.