Encyclopedia
An electric multiple unit or EMU is a multiple unit
Multiple unit
The term multiple unit or MU is used to describe a self-propelled carriages capable of coupling with other units of the same or similar type and still being controlled from one driving cab. The term is commonly used to denote passenger trainsets consisting of more than one carriage...
train consisting of self-propelled carriages, using electricity
Electricity
Electricity is a general term encompassing a variety of phenomena resulting from the presence and flow of electric charge. These include many easily recognizable phenomena, such as lightning, static electricity, and the flow of electrical current in an electrical wire...
as the motive power. An EMU requires no separate locomotive
Locomotive
A locomotive is a railway vehicle that provides the motive power for a train. The word originates from the Latin loco – "from a place", ablative of locus, "place" + Medieval Latin motivus, "causing motion", and is a shortened form of the term locomotive engine, first used in the early 19th...
, as electric traction motor
Traction motor
Traction motor refers to an electric motor providing the primary rotational torque of a machine, usually for conversion into linear motion ....
s are incorporated within one or a number of the carriages. Most EMUs are used for passenger trains, but some have been built or converted for specialised non-passenger roles, such as carrying mail or luggage, or in departmental use, for example as de-icing trains. An EMU is usually formed of two or more semi-permanently coupled carriages, but electrically powered single-unit railcar
Railcar
A railcar, in British English and Australian English, is a self-propelled railway vehicle designed to transport passengers. The term "railcar" is usually used in reference to a train consisting of a single coach , with a driver's cab at one or both ends. Some railways, e.g., the Great Western...
s are also generally classed as EMUs.

EMUs are popular on commuter and suburban rail networks around the world due to their fast acceleration and pollution-free operation. Being quieter than DMU
Diesel multiple unit
A diesel multiple unit or DMU is a multiple unit train consisting of multiple carriages powered by one or more on-board diesel engines. They may also be referred to as a railcar or railmotor, depending on country.-Design:...
s and locomotive
Locomotive
A locomotive is a railway vehicle that provides the motive power for a train. The word originates from the Latin loco – "from a place", ablative of locus, "place" + Medieval Latin motivus, "causing motion", and is a shortened form of the term locomotive engine, first used in the early 19th...
-drawn trains, EMUs can operate later at night and more frequently without disturbing residents living near the railway lines. In addition, tunnel design for EMU trains is simpler as provisions do not need to be made for diesel exhaust fumes. 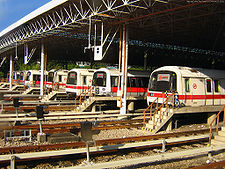 The cars that form a complete EMU set can usually be separated by function into four types: power car, motor car, driving car, and trailer car. Each car can have more than one function, such as a motor-driving car or power-driving car.

Some of the more famous electric multiple units in the world are high speed trains: the Shinkansen
Shinkansen
The , also known as THE BULLET TRAIN, is a network of high-speed railway lines in Japan operated by four Japan Railways Group companies. Starting with the Tōkaidō Shinkansen in 1964, the network has expanded to currently consist of of lines with maximum speeds of , of Mini-shinkansen with a...
in Japan
Japan
Japan is an island nation in East Asia. Located in the Pacific Ocean, it lies to the east of the Sea of Japan, China, North Korea, South Korea and Russia, stretching from the Sea of Okhotsk in the north to the East China Sea and Taiwan in the south...
and ICE 3
ICE 3
ICE 3 is a family of high-speed EMUs of Deutsche Bahn. It includes classes 403 and 406, which are known as ICE 3 and ICE 3M respectively...
in Germany
Germany
Germany , officially the Federal Republic of Germany , is a federal parliamentary republic in Europe. The country consists of 16 states while the capital and largest city is Berlin. Germany covers an area of 357,021 km2 and has a largely temperate seasonal climate...
. The retired New York-Washington Metroliner service, first operated by the Pennsylvania Railroad
Pennsylvania Railroad
The Pennsylvania Railroad was an American Class I railroad, founded in 1846. Commonly referred to as the "Pennsy", the PRR was headquartered in Philadelphia, Pennsylvania....
and later by Amtrak
Amtrak
The National Railroad Passenger Corporation, doing business as Amtrak , is a government-owned corporation that was organized on May 1, 1971, to provide intercity passenger train service in the United States. "Amtrak" is a portmanteau of the words "America" and "track". It is headquartered at Union...
, also featured high-speed electric multiple unit cars.