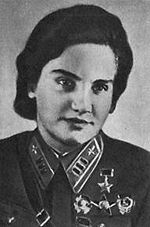 Born in Kharkiv
Kharkiv
Kharkiv or Kharkov is the second-largest city in Ukraine.The city was founded in 1654 and was a major centre of Ukrainian culture in the Russian Empire. Kharkiv became the first city in Ukraine where the Ukrainian Soviet Socialist Republic was proclaimed in December 1917 and Soviet government was...
, Ukraine
Ukraine
Ukraine is a country in Eastern Europe. It has an area of 603,628 km², making it the second largest contiguous country on the European continent, after Russia...
, she was the daughter of Vasil'yevich Grizodubov, a pioneer aircraft designer. At the age of fourteen, she flew a glider solo. She played piano and graduated from a conservatory as well as the Khar'kov Technical Institute. She also spoke several foreign languages. In 1929, she graduated from the Penza
Penza
-Honors:A minor planet, 3189 Penza, discovered by Soviet astronomer Nikolai Stepanovich Chernykh in 1978, is named after the city.-Notable residents:...
Flying Club of the paramilitary association Osoviakhim. She also trained at the Khar'kov Flying School.

In 1933, she graduated from the Tula
Tula, Russia
Tula is an industrial city and the administrative center of Tula Oblast, Russia. It is located south of Moscow, on the Upa River. Population: -History:...
Advanced Flying School. Here she became a flight instructor and trained 86 male pilots, many of whom became Heroes of Soviet Union. From 1934 to 1938 she flew in a "Propaganda" Squadron named after Maxim Gorky
Maxim Gorky
Alexei Maximovich Peshkov , primarily known as Maxim Gorky , was a Russian and Soviet author, a founder of the Socialist Realism literary method and a political activist.-Early years:...
.

She flew many types of aircraft and set seven world records including one for highest altitude reached by a female pilot on a two-seater seaplane (3.267 metres) on 15 October 1937, three speed records and one for long-distance flying between Moscow and Aktyubinsk together with Marina Raskova
Marina Raskova
Marina Mikhailovna Raskova was a famous Russian navigator. She later became one of over 800,000 women in the military service, founding three female air regiments which would eventually fly over 30,000 sorties in World War II.- Early life :...
.

On September 24–25, 1938, as the commander and along with Marina Raskova and Polina Osipenko, she completed the 6.500 km flight of the Rodina (Russian for "Motherland") on the Antonov ANT-37, setting an international women's record for a straight-line distance flight.

She had already accumulated 5.000 hours' flight before her historic flight, and together with her crew members became one of the first women to be appointed a Hero of the Soviet Union on 2 November 1938, also receiving a reward of 25.000 rubles.

Since March 1942 she took part in the German-Soviet War. She was appointed commanding officer of the 101st Long-Range Air Regiment, formed in May 1942, which consisted of about three-hundred men: pilots, navigators, engineers and ground support personnel.
Her unit was equipped with Lisunov Li-2
Lisunov Li-2
The Lisunov Li-2, originally designated PS-84 , was a license-built version of the Douglas DC-3. It was produced by the GAZ-84 works at Moscow-Khimki, and subsequently at GAZ-33 at Tashkent-Vostochn. The project was directed by aeronautical engineer Boris Pavlovich Lisunov.-Design and...
, transport aircraft (Douglas Dc-3
Douglas DC-3
The Douglas DC-3 is an American fixed-wing propeller-driven aircraft whose speed and range revolutionized air transport in the 1930s and 1940s. Its lasting impact on the airline industry and World War II makes it one of the most significant transport aircraft ever made...
built under licence) and the pilots were conscripted by Civil Air Fleet.

Grizodubova's Li-2s had a crew
Crew
A crew is a body or a class of people who work at a common activity, generally in a structured or hierarchical organization. A location in which a crew works is called a crewyard or a workyard...
of six aviators: pilot, co-pilot, navigator
Navigator
A navigator is the person on board a ship or aircraft responsible for its navigation. The navigator's primary responsibility is to be aware of ship or aircraft position at all times. Responsibilities include planning the journey, advising the Captain or aircraft Commander of estimated timing to...
, flight-technician, radio operator and air gunner
Air gunner
An air gunner a.k.a. aerial gunner is a member of an air force aircrew who operates flexible-mount or turret-mounted machine guns or autocannons in an aircraft...
. The unit had initially the task of bombing enemy troops, to fly to partisans and - in June 1942 - to help supply the besieged Leningrad
Leningrad
Leningrad is the former name of Saint Petersburg, Russia.Leningrad may also refer to:- Places :* Leningrad Oblast, a federal subject of Russia, around Saint Petersburg* Leningrad, Tajikistan, capital of Muminobod district in Khatlon Province...
. Subsequently, 101st Long-Range Bomber Air Regiment was ordered to bomb Wehrmacht
Wehrmacht
The Wehrmacht – from , to defend and , the might/power) were the unified armed forces of Nazi Germany from 1935 to 1945. It consisted of the Heer , the Kriegsmarine and the Luftwaffe .-Origin and use of the term:...
units that had broken Bryansk
Bryansk
Bryansk is a city and the administrative center of Bryansk Oblast, Russia, located southwest of Moscow. Population: -History:The first written mention of Bryansk was in 1146, in the Hypatian Codex, as Debryansk...
and South-Westerns Fronts and were heading for Voronezh
Voronezh
Voronezh is a city in southwestern Russia, the administrative center of Voronezh Oblast. It is located on both sides of the Voronezh River, away from where it flows into the Don. It is an operating center of the Southeastern Railway , as well as the center of the Don Highway...
. Grizodubova led her Regiment almost every night overcoming strong flak defences and Luftwaffe
Luftwaffe
Luftwaffe is a generic German term for an air force. It is also the official name for two of the four historic German air forces, the Wehrmacht air arm founded in 1935 and disbanded in 1946; and the current Bundeswehr air arm founded in 1956....
night fighters in Kursk
Kursk
Kursk is a city and the administrative center of Kursk Oblast, Russia, located at the confluence of the Kur, Tuskar, and Seym Rivers. The area around Kursk was site of a turning point in the Russian-German struggle during World War II and the site of the largest tank battle in history...
, Orel
Orel
Orel or Oryol can refer to:*Oryol, a city in Russia, the administrative center of Oryol OblastIt can also refer to:*Alexander Oryol , Soviet military leader and admiral...
and L'gov
Lgov
Lgov is a town in Kursk Oblast, Russia, located on both banks of the Seym River west of Kursk. Population: 26,000 ....
areas.

In September 1942, 101st Long-Range Air Regiment was placed at disposal of the Central HQ of the Partisan Movement. The unit flew more than 1,850 sorties to partisan held areas, delivering about 1,500 tons of arms and ammunition and hundreds of tons of radio equipments, printing presses, film cameras and reading matter, for Soviet partisan leaders. The Regiment evacuated 2,500 wounded partisans and homeless orphans too.

However, poor airstrips and enemy fighters were a costant threat to the Li-2s and their crews. On Grizodubova's initiative, by March 1943, partisans built an improved airstrip on the right bank of the Dnieper, where up to a dozen aircraft could be parked in daytime.

In the 1940s she served as the sole female member of the "Extraordinary State Commission for the Establishment and Investigation of the Crimes of the Fascist German Invaders and Their Accomplices, and of the Damage They Caused to Citizens, Collective Farms, Public Organizations, State Enterprises, and Institutions of the USSR" (Chrezvychainaia gosudarstvennaia komissiia or Чрезвычайная Государственная Комиссия; ChGK), appointed to investigate Nazi war crimes in the Soviet Union.

Grizodubova was the Honorary Citizen of Penza
Penza
-Honors:A minor planet, 3189 Penza, discovered by Soviet astronomer Nikolai Stepanovich Chernykh in 1978, is named after the city.-Notable residents:...
. There is a monument to her in Moscow
Moscow
Moscow is the capital, the most populous city, and the most populous federal subject of Russia. The city is a major political, economic, cultural, scientific, religious, financial, educational, and transportation centre of Russia and the continent...
.