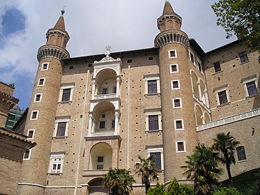 Urbino is a walled city in the Marche
Marche
The population density in the region is below the national average. In 2008, it was 161.5 inhabitants per km2, compared to the national figure of 198.8. It is highest in the province of Ancona , and lowest in the province of Macerata...
region of Italy
Italy
Italy , officially the Italian Republic languages]] under the European Charter for Regional or Minority Languages. In each of these, Italy's official name is as follows:;;;;;;;;), is a unitary parliamentary republic in South-Central Europe. To the north it borders France, Switzerland, Austria and...
, south-west of Pesaro
Pesaro
Pesaro is a town and comune in the Italian region of the Marche, capital of the Pesaro e Urbino province, on the Adriatic. According to the 2007 census, its population was 92,206....
, a World Heritage Site
World Heritage Site
A UNESCO World Heritage Site is a place that is listed by the UNESCO as of special cultural or physical significance...
notable for a remarkable historical legacy of independent Renaissance
Renaissance
The Renaissance was a cultural movement that spanned roughly the 14th to the 17th century, beginning in Italy in the Late Middle Ages and later spreading to the rest of Europe. The term is also used more loosely to refer to the historical era, but since the changes of the Renaissance were not...
culture, especially under the patronage of Federico da Montefeltro
Federico da Montefeltro
Federico da Montefeltro, also known as Federico III da Montefeltro , was one of the most successful condottieri of the Italian Renaissance, and lord of Urbino from 1444 until his death...
, duke of Urbino from 1444 to 1482. The town, nestled on a high sloping hillside, retains much of its picturesque medieval aspect, only slightly marred by the large car parks below the town. It hosts the University of Urbino
University of Urbino
The University of Urbino "Carlo Bo" is an Italian university located in Urbino, a walled hill-town in the region of Marche, located in the north-eastern part of central Italy. The university was founded in 1506, and currently has about 20,000 students, many of whom are from overseas...
, founded in 1506, and is the seat of the Archbishop of Urbino. Its best-known architectural piece is the Palazzo Ducale
Palazzo Ducale, Urbino
The Ducal Palace is a Renaissance building in the Italian city of Urbino in the Marche. One of the most important monuments in Italy, it is listed as UNESCO World Heritage Site.-History:...
, rebuilt by Luciano Laurana.

The modest Roman
Ancient Rome
Ancient Rome was a thriving civilization that grew on the Italian Peninsula as early as the 8th century BC. Located along the Mediterranean Sea and centered on the city of Rome, it expanded to one of the largest empires in the ancient world....
town of Urvinum Mataurense ("the little city on the river Mataurus") became an important strategic stronghold in the Gothic Wars of the 6th century, captured in 538 from the Ostrogoths by the Roman general Belisarius
Belisarius
Flavius Belisarius was a general of the Byzantine Empire. He was instrumental to Emperor Justinian's ambitious project of reconquering much of the Mediterranean territory of the former Western Roman Empire, which had been lost less than a century previously....
, and frequently mentioned by the historian Procopius
Procopius
Procopius of Caesarea was a prominent Byzantine scholar from Palestine. Accompanying the general Belisarius in the wars of the Emperor Justinian I, he became the principal historian of the 6th century, writing the Wars of Justinian, the Buildings of Justinian and the celebrated Secret History...
.

Though Pippin
Pippin the Younger
Pepin , called the Short or the Younger , rarely the Great , was the first King of the Franks of the Carolingian dynasty...
presented Urbino to the Papacy, independent traditions were expressed in its commune, until, around 1200, it came into the possession of the House of Montefeltro. Although these noblemen had no direct authority over the commune, they could pressure it to elect them to the position of podestà
Podestà
Podestà is the name given to certain high officials in many Italian cities, since the later Middle Ages, mainly as Chief magistrate of a city state , but also as a local administrator, the representative of the Emperor.The term derives from the Latin word potestas, meaning power...
, a title that Bonconte di Montefeltro managed to obtain in 1213, with the result that Urbino's population rebelled and formed an alliance with the independent commune of Rimini
Rimini
Rimini is a medium-sized city of 142,579 inhabitants in the Emilia-Romagna region of Italy, and capital city of the Province of Rimini. It is located on the Adriatic Sea, on the coast between the rivers Marecchia and Ausa...
(1228), finally regaining control of the town in 1234. Eventually, though, the Montefeltro noblemen took control once more, and held it until 1508. In the struggles between the Guelphs and Ghibellines
Guelphs and Ghibellines
The Guelphs and Ghibellines were factions supporting the Pope and the Holy Roman Emperor, respectively, in central and northern Italy. During the 12th and 13th centuries, the split between these two parties was a particularly important aspect of the internal policy of the Italian city-states...
where factions supported either the Papacy or the Holy Roman Empire, the 13th and 14th century Montefeltro lords of Urbino were leaders of the Ghibellines of the Marche and in the Romagna
Romagna
Romagna is an Italian historical region that approximately corresponds to the south-eastern portion of present-day Emilia-Romagna. Traditionally, it is limited by the Apennines to the south-west, the Adriatic to the east, and the rivers Reno and Sillaro to the north and west...
region.

The most famous member of the Montefeltro was Federico III (or II), Duke of Urbino from 1444 to 1482, a very successful condottiere, a skillful diplomat and an enthusiastic patron of art and literature. At his court, Piero della Francesca
Piero della Francesca
Piero della Francesca was a painter of the Early Renaissance. As testified by Giorgio Vasari in his Lives of the Artists, to contemporaries he was also known as a mathematician and geometer. Nowadays Piero della Francesca is chiefly appreciated for his art. His painting was characterized by its...
wrote on the science of perspective, Francesco di Giorgio Martini wrote his Trattato di architettura ("Treatise on Architecture") and Raphael
Raphael
Raffaello Sanzio da Urbino , better known simply as Raphael, was an Italian painter and architect of the High Renaissance. His work is admired for its clarity of form and ease of composition and for its visual achievement of the Neoplatonic ideal of human grandeur...
's father, Giovanni Santi
Giovanni Santi
Giovanni Santi was an Italian painter and decorator, father of Raphael. He was born at Colbordolo in the Duchy of Urbino. He was a petty merchant for a time; he then studied under Piero della Francesca. He was influenced by Fiorenzo di Lorenzo, and seems to have been an assistant and friend of...
, wrote his poetical account of the chief artists of his time. Federico's brilliant court, according to the descriptions in Baldassare Castiglione
Baldassare Castiglione
Baldassare Castiglione, count of was an Italian courtier, diplomat, soldier and a prominent Renaissance author.-Biography:Castiglione was born into an illustrious Lombard family at Casatico, near Mantua, where his family had constructed an impressive palazzo...
's Il Cortegiano ("The Book of the Courtier
The Book of the Courtier
The Book of the Courtier is a courtesy book. It was written by Baldassare Castiglione over the course of many years, beginning in 1508, and published in 1528 by the Aldine Press just before his death...
"), set standards of what was to characterize a modern European "gentleman
Gentleman
The term gentleman , in its original and strict signification, denoted a well-educated man of good family and distinction, analogous to the Latin generosus...
" for centuries to come.

In 1502, Cesare Borgia
Cesare Borgia
Cesare Borgia , Duke of Valentinois, was an Italian condottiero, nobleman, politician, and cardinal. He was the son of Pope Alexander VI and his long-term mistress Vannozza dei Cattanei. He was the brother of Lucrezia Borgia; Giovanni Borgia , Duke of Gandia; and Gioffre Borgia , Prince of Squillace...
, with the connivance of his Papal father, Alexander VI
Pope Alexander VI
Pope Alexander VI , born Roderic Llançol i Borja was Pope from 1492 until his death on 18 August 1503. He is one of the most controversial of the Renaissance popes, and his Italianized surname—Borgia—became a byword for the debased standards of the Papacy of that era, most notoriously the Banquet...
, dispossessed Duke Guidobaldo
Guidobaldo da Montefeltro
thumb|240px|Portrait of Guidobaldo da Montefeltro by [[Raphael]].Guidobaldo da Montefeltro , also known as Guidobaldo I, was an Italian condottiero and the Duke of Urbino from 1482 to 1508.-Biography:...
and Elisabetta Gonzaga
Elisabetta Gonzaga
Elisabetta Gonzaga was a noblewoman of the Italian Renaissance, renowned for her cultured and virtuous life. A member of the noble House of Gonzaga, she was a sister of Francesco II Gonzaga, Marquess of Mantua and by marriage the Duchess of Urbino...
. They returned in 1503, after Alexander had died. After the Medici pope Leo X's brief attempt to establish a young Medici as duke, thwarted by the early death of Lorenzo II de' Medici in 1519, Urbino was ruled by the dynasty of Della Rovere
Della Rovere
Della Rovere is a noble family of Italy. Coming from modest beginnings in Savona, Liguria, the family rose to prominence through nepotism and ambitious marriages arranged by two Della Rovere popes, Francesco della Rovere, who ruled as Pope Sixtus IV and his nephew Giuliano...
dukes (see also War of Urbino
War of Urbino
The War of Urbino was a secondary episode of the Italian Wars.The conflict ensued after the end of the War of the League of Cambrai , when Francesco Maria I della Rovere decided to take advantage of the situation to recover the Duchy of Urbino, from which he had been ousted in the previous year.In...
).

In 1626, Pope Urban VIII
Pope Urban VIII
Pope Urban VIII , born Maffeo Barberini, was pope from 1623 to 1644. He was the last pope to expand the papal territory by force of arms, and was a prominent patron of the arts and reformer of Church missions...
definitively incorporated the Duchy into the papal dominions, the gift of the last Della Rovere duke, in retirement after the assassination of his heir, to be governed by the archbishop. Its great library was removed to Rome and added to the Vatican Library
Vatican Library
The Vatican Library is the library of the Holy See, currently located in Vatican City. It is one of the oldest libraries in the world and contains one of the most significant collections of historical texts. Formally established in 1475, though in fact much older, it has 75,000 codices from...
in 1657. The later history of Urbino is part of the history of the Papal States
Papal States
The Papal State, State of the Church, or Pontifical States were among the major historical states of Italy from roughly the 6th century until the Italian peninsula was unified in 1861 by the Kingdom of Piedmont-Sardinia .The Papal States comprised territories under...
and, after 1861, of the Kingdom (later Republic) of Italy
History of Italy
Italy, united in 1861, has significantly contributed to the political, cultural and social development of the entire Mediterranean region. Many cultures and civilizations have existed there since prehistoric times....
.

Outside the city is the Church of San Bernardino, housing the tombs of the Dukes of Urbino.

Others notable people from Urbino include: